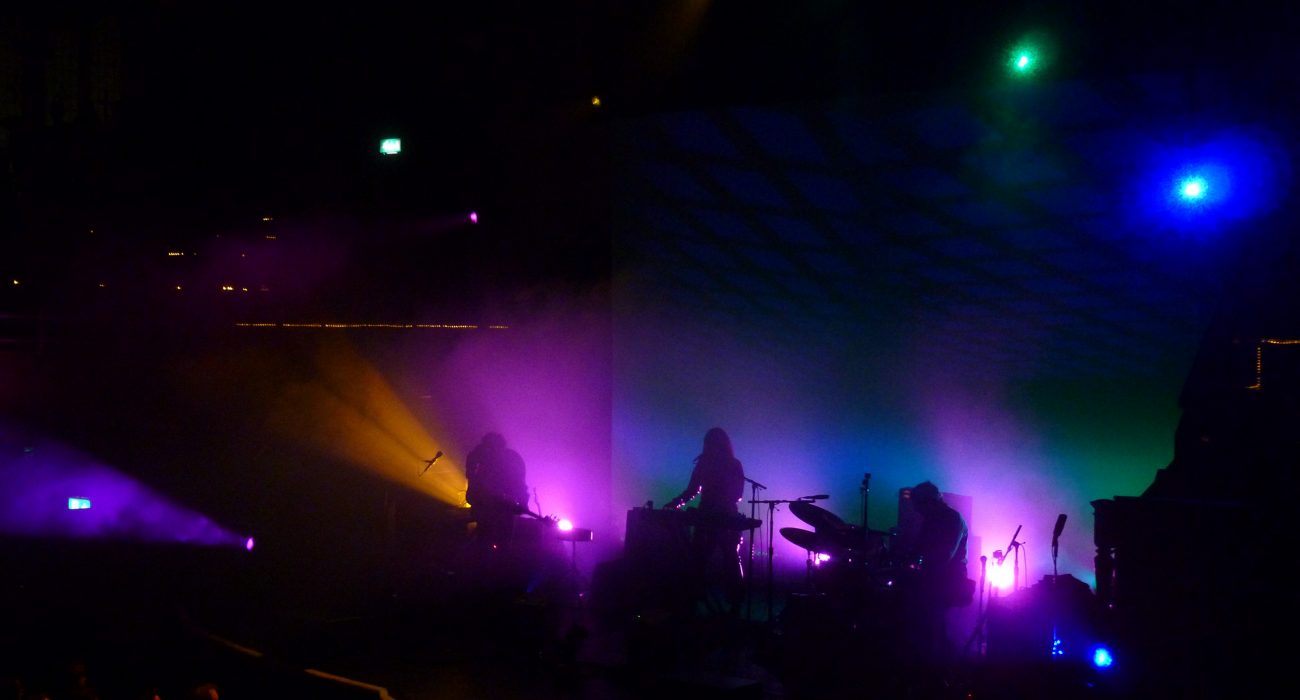 Angelic synth sounds filled the Albert Hall as Beach House’s vocalist Victoria Legrand murmured “There’s a place I want to take you, where the unknown will surround you.” Like a siren luring sailors out into uncharted waters, obscured by the illuminated mist that hung eerily above the dark stage, Beach House captivated their audience from the first song.

Bursting onto the dream pop scene back in 2006, with their self-titled debut album, Beach House have long been a cult favourite. Seven albums later, the duo from Baltimore, USA have refined and perfected a mysterious sound for their latest album — 7 — which is both hauntingly beautiful and at times seriously sinister. Victoria Legrand oversees vocals and the keyboard while Alex Scally principally offers his skills on guitar and as a backup vocalist, with the addition of James Barone on drums and percussion throughout their tour.

After they began their set with ‘Levitation’, a popular track off of their previous album, ‘Depression Cherry’, it became clear this show wasn’t going to be an album-led affair. Instead, their set-list largely featured single releases from throughout their career and is perhaps a pleasant by-product of their sonically consistent discography.

If Bloom was about filling a large stage with loud sounds and live drums, catering to their crowd, and Depression Cherry was about a return to simplicity, with minimalist instruments and strong core melodies, then 7 is about removing all of their self-imposed limitations. There are songs with no guitar, with no keyboard, and tracks that feature so much production that their layers cannot be replicated live — 7 is about artistic expression.

Packed out to the rafters, the audience spanned young teens to professionals in their 30s; many people had travelled from far to see this sold-out show. Sat on the steps upstairs, watching down on the stage, you could feel every beat reverberating through your body, the lyrics indistinct, in and out of focus, but the experience, the sound, and the visuals were so immersive it didn’t matter. You didn’t need them to feel the mood that was being painted.

So much of the beauty of the set could be seen in the staging: the moments when the guitar kicked in and the stage went red, or when a spotlight shone down, like the beam of a UFO into the dark, switching between musician on each staccato keyboard note. In the colours, the lights, the patterns swirling over the crowd, and in the moments when Legrand hid herself by bending down low behind the keyboard, allowing the starry skies projected behind her to steal the crowd’s attention.

‘Dark Spring’, the opening track for 7, sounded so much stronger live, with its guitar intro proving monumental. Styled like a Tame Impala instrumental track, it exploded from the outset, beautiful yet jarring at times, fading to a siren as it finished.

‘PPC’ with its 80s feel movie soundtrack vibe, was a big crowd pleaser, and after that, each track played was received with raucous applause.  Orange lights illuminated the stage, pulsing in time with the lyrics for ‘Pay No Mind’, the bass growling and a double track of Legrand’s lyrics running, singing out a typically ambiguous Beach House chorus: “Baby at night when I look at you/ Nothing in this world keeps me confused/ All it takes/ Look in your eyes.”

This melancholic love was explored further in the ‘Teen Dream’ track ‘10 Mile Stereo’ with the ethereal echoing of “They say we will go far, but they don’t know how far we’ll go” / “It can’t be gone, we’re still right here” / “Love’s like a pantheon, it carries on forever”, sung out as white lights went totally crazy, overpowering the stage and the audience.

To bring their comprehensive set to a close, Beach House chose two of their most streamed songs from ‘7’. ‘Drunk In LA’, arguably the album’s centrepiece, told a tale of fading youth, as Legrand sung “I remember I am loving losing life”, melancholic in both sound and sentiment. But it seemed the band weren’t quite done, as they were soon lured back out to encore for two last songs. ‘Norway’ was proclaimed to be a “blast from the past” by Legrand, but nothing could rouse the crowd quite like the running drumbeat of ‘Dive’ — this really got them moving.

Sonically beautiful, artistically brilliant — what a performance! You’ll be hard-pressed to find a ticket that’s better value for money, since Beach House really delivered on all fronts. Such a strong show from the well-practised duo, who commanded the stage with great presence, and yet no ego, throughout. We’ll be back for album 8, that much is for sure.