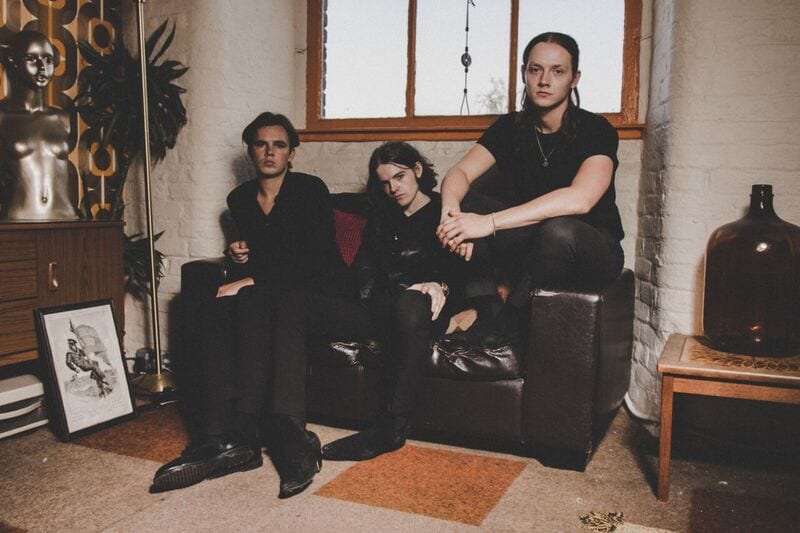 In conversation with The Blinders

Manchester-based trio The Blinders are leading the masses into a new era of protest music in the guise of their new album Columbia. It’s unsurprising that the dystopian political commentary themed album is lapping up praise from both fans and industry-toffs alike, and their latest tour matches this debut album in both confidence and skill.

Supported by Calva Louise and White Room, the sold-out show oozed anticipation for the headline-act, sadly detracting from these two bands with some serious potential. The release of Columbia and the coverage it has received in mainstream media both locally and nationally has developed a hype around The Blinders that leaves other bands in its wake. Calva Louise demonstrated strong noughties pop-rock tones but lacked the control I would have hoped for within their style. They were well-placed as an opening act, with whimsical tracks, poised harmonies and a distinctive sound. Unfortunately, their catchy riffs failed to capture the audience who bobbed along, non-plussed, and slightly confused as to what the trio were trying to achieve.

White Room managed to build on the energy in the room better. With strong lead vocals, lifted by excellent backing from the only female member of the band, they possessed the stage, delivering a performance that engaged even those at the back of the room. As a representation of the progression of the genre, they’re an excellent example of where psych-rock is headed; lead singer Jake enthrals with his Bowie-like tone, the unpolished but controlled nature of each track makes them distinctive. Moreover, the sultry sexiness and smooth rhythms hark back to the best of blues and the 80s rock revolution.

Two days previously, I managed to chat to Charlie, The Blinders’ bassist, about their debut album. This collection of tracks is laced with political and social commentary, filling a void in the musical expression of young people that I have noticed for a considerable time. It’s unsurprising that this form of commentary is becoming more prominent. We represent a generation of the increasingly frustrated, both politically, economically and socially. And this can be seen in their latest release, and in their demographic of fans. These are the people who have been “promised but failed”, seeking a future that “never materialised”, as Charlie put it. He has a point. There’s an increasing movement among those between the ages of 18 and 40 of political frustration, of being ignored and sidelined by the government for political gain. This is a generation lacking hope.

Charlie argues that Columbia is “more of a documentary than a manifesto”, but their set doesn’t feel like that. Watching them perform on their latest tour, where they are introducing this new collection of work to both fans and newcomers alike, it feels like being in the middle of the start of a revolution. Watching the crowd’s reaction to them only solidifies that. It can’t be denied that there’s plenty for them to take inspiration from when producing new material. The “abundance of issues” seems to have fuelled the production to this album, but the question is: do the band feel as though they are aiding in improving the current status quo?

Charlie seems to hope so. He describes it as “shouting into a vacuum”. Again, he has a point. But then he explains that “music is integral to social change”, that we as a generation are failing to direct our anger and frustration, and it’s reducing the difference we make. There seems to be a hope that The Blinders are having an effect. From what I’ve seen, I think it’s very possible that they are becoming leaders in a musical movement which is dragging social and political dissent into the mainstream.

The stage is dressed for such an occasion. Banners adorning the name Columbia descend from the rafters to the floor, however what is most striking is the Ouroboros, the snake eating itself, which accompanies it. Probably unnoticed by most, but highly significant, this is a band which isn’t just interested in self-achievement or their musical production, but who understand that they may well be part of a larger movement.

Whether intentional or not, it is appropriate that their tour should start here, in Manchester. The adrenaline, the anger, the tension and waiting that consumed the room for their hour-long set was incredible; the revolutionary undertones of the whole performance seemed to demonstrate a manifesto more than they’d probably care to admit. But a conventional one, this is not.

The activist in me would hope that the rise of bands like The Blinders is a symptom of the rise of a movement of political and social change. Nevertheless, there’s no doubting that we’ve been waiting for these guys; they voice the frustration of millions.