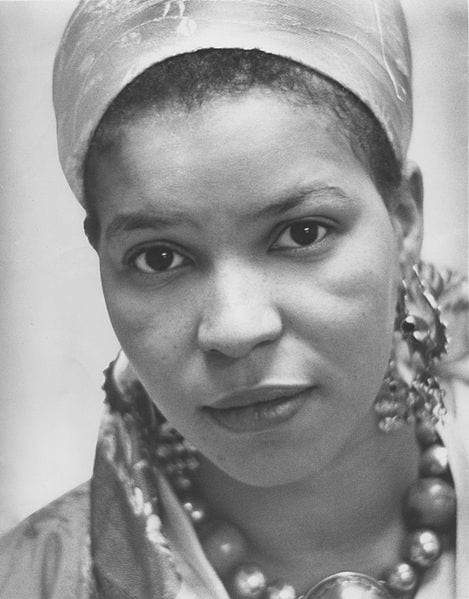 On the 27th October, acclaimed poet and playwright Ntozake Shange died at the age of 70.

Her breakout play, or as Shange called it “choreopoem”, For Colored Girls Who Have Considered Suicide / When the Rainbow Is Enuf has inspired generations of artists of colour. It was controversial in showing the nuances and struggles of being a black woman in America. Her experiments with language were trailblazing; her scattered verse had more in common with jazz scatting than with what was deemed serious theatre. To paraphrase one of her poem titles, her “pen [was] a machete”.

For Coloured Girls has been studied as a feminist masterpiece. Through its 20 monologues set to music, Shange dissected the intersections between racist and sexual violence.

She was a prolific writer, publishing 19 collections of poetry, six novels, five children’s books and three essay collections. She was still writing up to the moment of her death.

She said in an interview that she “write[s] for young girls of colour, for girls who don’t even exist yet, so that there is something for them when they arrive”. The two-time Pulitzer prize winning writer Lynne Nottage said that Shange “spoke to a generation of young women who didn’t feel invited into a theatre space, who suddenly saw representation of themselves in a very honest way, and understood that they could occupy that space for the first time.”

Her influence is widespread, she will be remembered and celebrated through her work but also through the work of writers she inspired. Every time you hear someone say a phrase like “black girl magic”, Shange’s legacy lives on. She wrote extensively about “black girl magic” and in one of my favourite poems of hers, My Father Is a Retired Magician, she writes that “everythin i do is magic these days”.

She put issues around racism and sexism centre stage, she created a space for artists of colour to perform and paved the way for a new generation of writers. By writing about suffering, she reclaimed control over her circumstances and spread a message of positivity. In her words, “you gonna love it/ bein colored/ all yr life”.