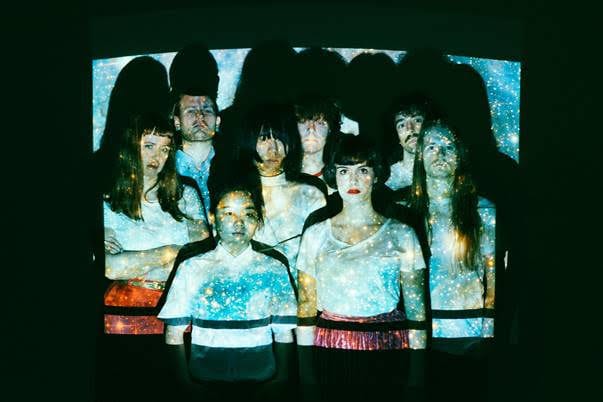 After interviewing Superorganism singer B a few weeks ago, I was buzzing with anticipation for their performance at the O2 Ritz.

B had told me “People can get excited for an all singing, all dancing, colourful, sparkly, multicentric experience!” and she certainly wasn’t wrong. Going to a Superorganism gig is like going to one big party and I would tell anyone if they get the chance to, that they need to see this band live.

Fun, quirky, techno-pop band Superorganism have been going through a meteoric rise since they released their debut earlier this year and their return to Manchester as part of their huge global tour was a welcomed event.

With such a diverse crowd, ranging from frenzied kids dressed in colourful outfits to people in their 30s, Superorganism puts on a show for everyone. The dancing was absolutely contagious all night long – you could tell it wasn’t just the crowd who were enjoying the set, the band were too.

As the room stood waiting, anticipation grew before their impressive visuals began to unfold on a screen behind the stage. Dressed in dazzlingly bright costumes, the group appeared to an uproar of applause and cheering. The visuals, courtesy of collaborator and visual artist Robert Strange made it abundantly clear that this is a band spawned from the age of the internet and managed to incorporate this into their live shows with ease and wonder.

The O2 Ritz was the perfect venue for this carnival-style gig. It was intimate and intense, with lead singer Orono Noguchi mentioning between songs how much eye contact she gathered from the wide-eyed audience before eventually crowd surfing on an inflatable whale.

The set began with self-titled ‘SPRORGNSM’, a flawless opener that really set the tone for the rest of the gig. Each subsequent song flowed into the next, seemingly in order from least to most well known.

Regardless of this structure, there would always be members of the crowd that knew each song religiously, and had no issue in screaming back the lyrics in between vivacious dance moves.

Occasionally, mysterious (and effortlessly cool) lead singer Orono would invest time and focus to the audience, even inviting a lucky few to party with them on stage whilst they played ‘Relax’. The set came to an almighty and colourful finale with their most well-known songs – ‘Everybody Wants To Be Famous’ and ‘Something For Your M.I.N.D’.

Visually, the band’s energy and the electrifying atmosphere combined to create a psychedelic whirlwind that allowed everyone in that room to feel as if they were a part of this technicolour wonderland.

An amazing night. If I were to find an issue, it would be that the set was suprisingly short (clocking in at just over an hour), leaving you craving more. This isn’t necessarily a bad thing, it just makes you want to see them again and again to relive that insanity. Superorganism are set on world domination – I’d advise you not to miss out.