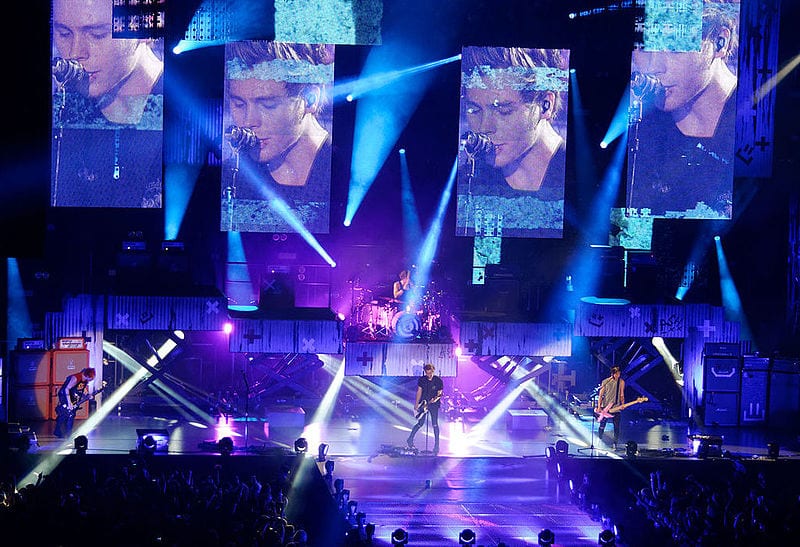 I will admit that my fascination with 5 Seconds of Summer began when I was 15 years old. I was pretty much enamoured and enthralled by their somewhat simplistically romantic songs of young heart break and teenage dreams. Sure, the lyrics were not anything groundbreaking, but I was always excited to hear their emerging pop punk sound and enthusiasm. Although fans were lucky enough to witness this enthusiasm at the band’s sold-out show at Manchester’s Apollo, the overall performance seemed a little lacklustre.

Lovelytheband were, as the name suggests, lovely, but not particularly of any specific note to keep me engaged in their performance for more than a couple of seconds. Set up far too close to the front of the stage, this band formed a small semi circle and played mostly to the crowds of fans in the lower standing area, leaving the upper balconies to feel rather left out apart from during the fairly repetitive track  ‘These Are My Friends’ when the rest of the crowd were acknowledged. Their songs were mostly amiable and sweet but altogether more suited to a smaller, cosier venue rather than the vast, empty space that encapsulated their set. Their attempts to regain the crowd with a cover of ‘Mr Brightside’ was admirable, but came a little too late.

When 5 Seconds of Summer finally did appear before us, I was shocked to see the same issues with the stage space arise again. There seemed to be far too much room surrounding them, affecting the performance – backing vocal tracks immediately became lost to this static space. What I saw at their show was not the same band that I had grown up with and loved.

This had the potential to be a good thing; perhaps 5 Seconds of Summer had now transformed in to something new, interesting even. Unfortunately, this was not the case. Poor stage design and set up plagued the performance. The show was riddled with mirrored walls, smoke machines and an inherently frustrating light show that dizzied the entire auditorium.

One thing that could certainly be held to their credit was the dedicated fan base that accepted all of this and took it in with extreme delight. From the start it was clear that I was in for a glittering, pop-centric night that would be dominated by their new release ‘Youngblood’, which the crowd lapped up excitedly. They opened the set with ‘Babylon’ which has a strongly anthemic style but was hindered by an over-loud backing track that took away slightly from the beautiful vocals of frontman Luke Hemmings.

In older tracks such as ‘Waste The Night’, Hemming’s talents were put to better use, when the band really shone with a hint of their old glory. It was also a fantastic opportunity to see Ashton Irwin’s reckless command on the drums which I had always felt gave a unique edge to the performance and was often a highlight of my concert experience through the many shows I had seen over the years. However, whilst the huge kit of extensive pedals and equipment remained, all the heart and vitality that I’d come to adore from Irwin’s performance was (for the most part) replaced with an almost permanently restrained pop style. There were other moments that broke away from this but I found myself constantly hoping for more and it simply didn’t materialise.

It is evident that this band is highly talented but it is rather bizarre that they have been thrown together again, reemerging in a whirlwind of glittery pop music. Admittedly, the tracks seem well-produced and polished, but gone is the grungy foursome that burst onto the scene years ago.

Perhaps this new era appeals to some but it would be more impressive to see this band build and progress, rather than completely overhaul everything they’ve ever created in a blur of bright lights and murky mirrors.