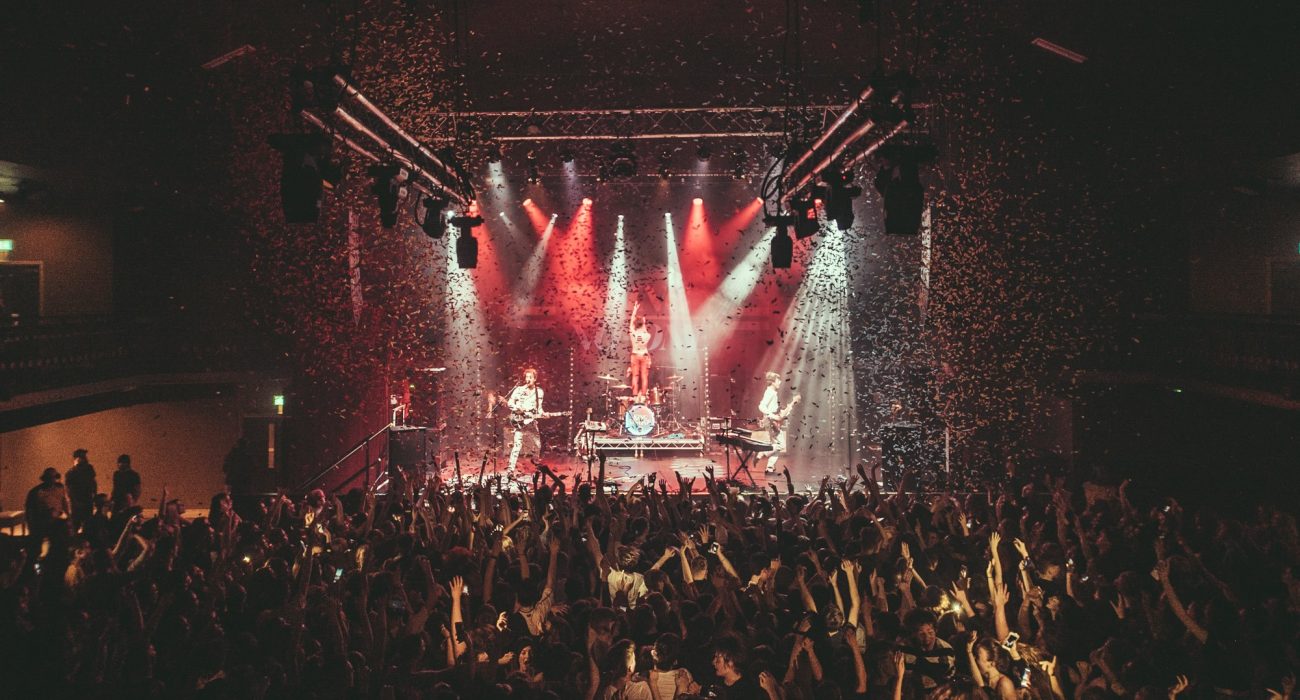 I remember when King No-One were charging a couple of quid on the door of a small local venue for people to come and see their set of decidedly euphoric and outspoken songs. They were exotic, radical and represented the world outside of our known realm.

It’s therefore astonishing that nearly six years later, I see that same resonance in their teenage fans, now that their first audience has aged. The band feels decidedly more political now than when they were playing venues of a couple of hundred people — perhaps that follows a trend we can see in young musicians in the North of England at the moment.

King No-One’s recent tour appears to have been a short but sweet success; their final date at Manchester’s The Ritz was a sensationalist attempt at political and social commentary — arguably more whimsical than their musical counterparts trying to convey similar messages. Supported by local four-piece Carnival Club, and the brilliant Glass Caves, The Ritz carried the sound of each act beautifully, despite not being filled to capacity.

Carnival Club opened the night with a gritty, strong set which reflected the talent within the foursome; carefully controlled vocals, seamless guitar-riffs captivated the plethora of young fans. Starting with firm favourite ‘Follow the Sun’, their stage presence was effortlessly elegant and their commendable technique and skill on stage is evidence of plenty of experience playing the local circuit. Expect excellent things to come from them in the near future, and look out especially for their upcoming headline gig on the 15th December. Support from Glass Caves’ was also an apt selection, who are indeed destined for great things.

As ever, headliners King No-One were a combination of electric tunes that the crowd easily sung along to and carefully choreographed stage performance that had the whole room engaged from beginning to end. Walking onstage in co-ordinating outfits, lead singer Zach Lount adorned in a red reflective jacket which stunned the audience and grabbed attention. It was quickly evident that their fanbase, though young, is extremely devoted to them and the message they’re trying to convey.

Old hits such as ‘Millenium’ were blended with new tracks from their upcoming EP Out of My Mind; none failed to resonate with the crowd and they loved every moment. It was wonderful to see such a consistent and engaging level of energy — from both the crowd and the band themselves.

The whimsical, theatrical performance put on by this threesome is impressive, but seems to overshadow their objective. At every show, lead singer Zach gives an empowered speech on the nature of equality and its importance to them in their music. Although commendable, it can only be questioned to what extent this embodies the aims and focus of their songwriting and performance — and whether this is leaving the impression they would hope on their fans. Nevertheless, the show was well-rounded and well-cut, and marks the start of a four-month break until the release of their long-awaited EP. Accompanied by a short tour with three distinctive shows in Manchester, this release looks to be reflectively intimate. It’ll certainly be worth the wait.