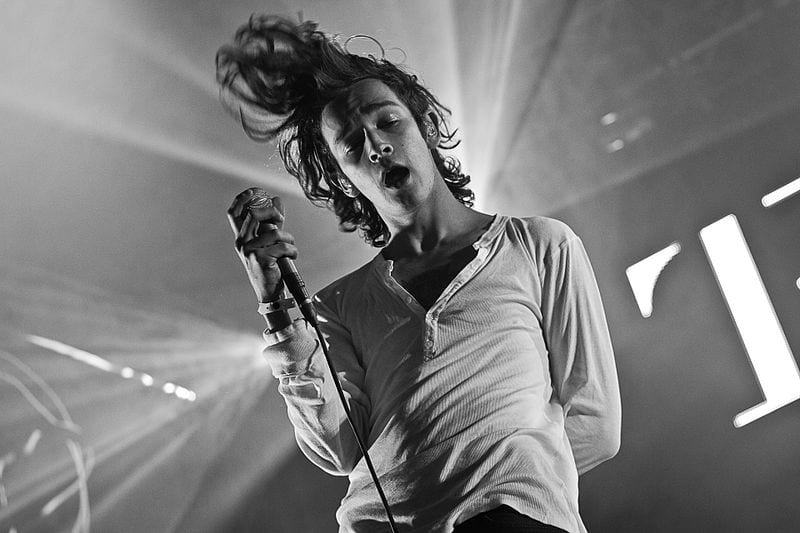 Feature: A Brief Inquiry Into The 1975

With The 1975′s latest album — A Brief Inquiry Into Online Relationships – receiving vast amounts of critical praise, The Mancunion’s Music Section editors, Olivia and Jake, revisit the band’s entire discography to see how they’ve progressed over the years.

In an era already oversaturated with guitar-driven indie music, The 1975 presented something that was tangibly different. Their debut EP Facedown was laced with intricate guitar reverb, haunting synthesisers and distorted percussion. Most importantly, frontman Matty Healy’s lyricisms were a dark, but refreshingly honest take on the problems of growing up and struggling with finding your place in the wider world. These idiosyncratic differences would mark The 1975 as one of the most exciting new acts around.

Their willingness for experimentation continued within their next three EPs (Sex, Music for Cars, IV), each one pushing the band’s abilities and repertoire to new levels. The beautifully crafted soundscapes of songs like ‘Intro / Set 3’, ‘Haunt // Bed’ and ‘Anobrain’ established The 1975 as much more than just another pop group. The lyrics were dark, the instrumentations foreboding, but yet they had this uncanny ability to comfort you.

By the time their 2013 self-titled debut (The 1975) came about, the group already demonstrated themselves to be masters of their craft. Rather than abandon so many avenues that had been explored, The 1975 takes the best elements of the EPs and perfects them, adds to them, and succeeds in creating a stunning first release.

Embedded amongst the stereotypical angsty youth anthems of ‘Girls’ and ‘Sex’ are some masterfully produced instrumental tracks. ‘An Encounter’ and ‘12’ inject a much needed breather at their intervals, allowing for a moment of reflection. They’re not just sonically pleasing, but create an atmosphere synonymous with that era as one of brooding uncertainty and, in a way, fear.

Lyrically, Healy’s fragility is often concealed behind up-tempo beats or wry social commentary — but it is there. Feelings of rejection, isolation, regret and excess are peppered throughout the debut if you pay close attention. It’s a deeply personal LP as much as it is a riotous journey through adolescent chaos — themes that greatly resonated with audiences.

I Like It When You Sleep, For You Are So Beautiful Yet So Unaware Of It (ILIWYS)

Olivia says: Pioneered with ironic hit-single and accompanying garish music video ‘Love Me’, The 1975 plunged 2016 into a year of reigning the industry with the release of I Like It When You Sleep For You Are So Beautiful Yet So Unaware Of It. The 1975 shot straight to the top of UK, US and Australian weekly charts, finishing 25 by the end of the year in the UK and ILIWYS was crowned NME’s Album of the Year.

ILIWYS is arguably The 1975’s most sentient, polished, and poignant record. As a collection of Matty’s tragic, nostalgic and beautifully raw narratives, the band’s UK platinum scoring second album is nothing short of genius. With its release followed an era of spiritually cleansing live light shows and tingling aesthetics that will certainly linger in our subconscious for decades to come.

‘Somebody Else’, ‘If I Believe You’, and ‘Nana’ define the album’s most stirring moments, each track is led by Matty’s pain-stricken lyricism that is perfectly echoed by the band’s ability to concoct a soundscape leaving you missing someone you’ve never even met. Straying away from the largely defining guitar riffs of The 1975, ILIWYS illustrates a venture into a resurgence of 80s synth pop beats and soulful harmonies especially in the hypnotic ‘She’s American’, and ‘Loving Someone’.

ILIWYS is a clear progression from the band’s youthful and angsty self-titled debut. It features far more experimentation, a greater range of influences and most importantly, a recognisable confidence that The 1975 know exactly who they are and what they want to create as artists.

As far as pressures go for bands to maintain their reputation with a solid second album, ILIWYS cemented The 1975’s image as one of the most exciting and polished pop-rock bands of the 21st century.

After an incredible journey, is it safe to say that A Brief Inquiry Into Online Relationships (ABIIOR) has solidified The 1975 as “the best band of the decade”? The editors give their hot takes below:

Jake says: A Brief Inquiry Into Online Relationships is lyrically raw, musically diverse and perhaps the most culturally relevant record of our time. It is also potentially the greatest record that the 1975 have ever produced – arguably more so than their sophomore release.

The narrative weaved throughout ABIIOR is one that perfectly encapsulates the negative feelings of a generation living online: isolation (‘The Man Who Married a Robot’), obsession (‘Inside Your Mind’), self-doubt (‘Give Yourself A Try’). But it also delivers a sense of hope, sincerity and compassion. Modernity may have failed us, but The 1975 point us in the way of redemption.

Here, The 1975 expertly grapple different genres with ease — jazz, swinging piano ballads, trap, techno, and even Britpop make notable appearances. Yes, some tracks might sound jarring (especially when autotune is employed) but I’d argue that this abrasion is fitting with the story ABIIOR is trying to convey; our intimate, personal moments are slowly being superseded by technology and if that isn’t startling then I think you’re missing the point.

It took me a while to settle in to this one — I wasn’t expecting it to be as soft as it transpires to be. But once I’d listened through a few times, it was immediately clear as to why this record is being praised as much as it is.

Their debut was a gloomy insight in to adolescent strife. I Like It When You Sleep… played more like a façade, a bombastic showstopper that hid Healy’s troubled mental state brilliantly. ABIIOR is unflinchingly honest and composed. It feels personal, rather than at an attempt at grandiosity – and as we continue living in a culture steeped in deceit and falsehoods, I’d argue that ABIIOR is the most necessary album out there.

Olivia says: Kicking off ABIIOR is the band’s traditional opener ‘The 1975’, but this time, instead of being soul reaching or nostalgic, it’s horrific. I understand why the band have decided to use a far more experimental endeavour into it this time, but I don’t think it works. It’s not sonically satisfying in any way. Instead it comes across just as abrasive as the leading guitar riff in ‘Give Yourself a Try’.

However, overall ABIIOR is yet again a piece of art showcasing the extent to which The 1975 are determined to constantly defy their critics presumptions about who they are. This is a very intelligent record, and is particularly relevant given the technological and social-media obsessed age we are living in. Tracks like ‘The Man Who Married a Robot’ is just so raw and unique given the band’s decision to use the voice of Siri to narrate a tragic story. Its outro is utterly euphoric and really illustrates just how skillful the lads are not only as musicians but also producers of their own work.

‘I Always Wanna Die (Sometimes)’ and ‘It’s Not Living (If It’s Not with You) offer a subtle nod to ILIWYS, both climaxing into a warmth of Matty’s soothing vocals which are embellished by blissful harmonies and the band’s ability to concoct an anthemic soundscape. ‘I Like America and America Likes Me’ is proving to be a reigning song off the record with every listen, despite my usual abhorrence for the overuse of autotuned vocals. The power and desperation of the actual lyricism is still able to breakthrough the production making it a really prominent track alongside ‘Love It If We Made It’ (the album’s stand-out track).

While a unique and intelligent record, it appears as if it’s a statement with a purpose to stick to a theme rather than genuine truth.

Tags: A Brief Inquiry Into Online Relationships, for you are so beautiful yet so unaware of it, I like it when you sleep, Love It If We Made It, Love Me, Matty Healy, the 1975