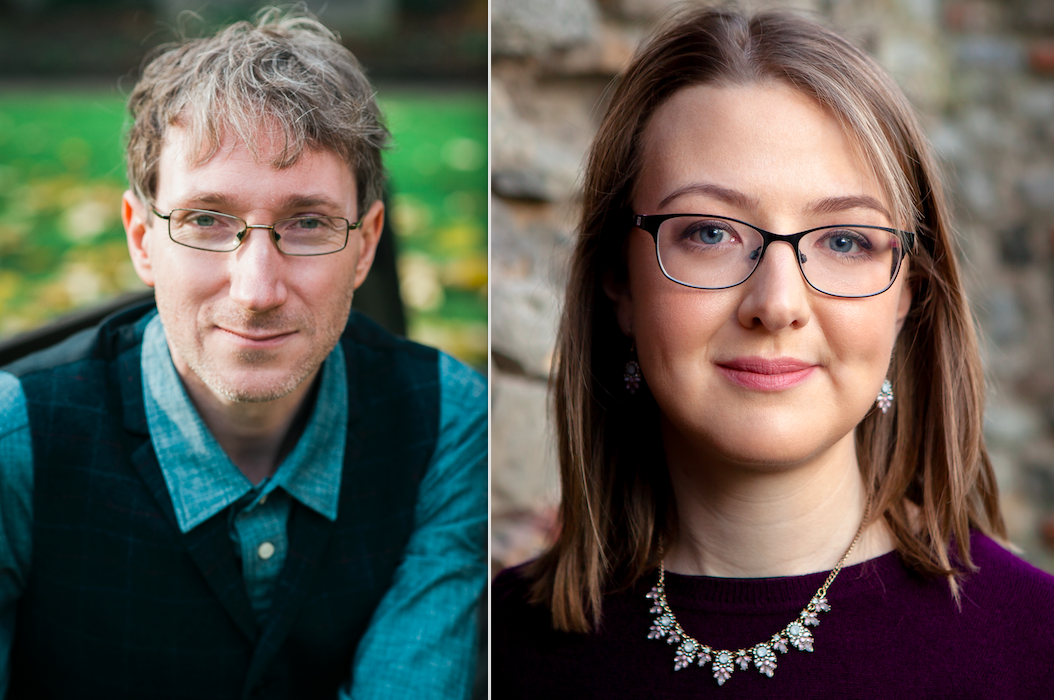 I met Laura Purcell and Stuart Turton before the first show of their joint UK book tour. “Our books aren’t similar in any way really,” Purcell said, when I asked why they were touring their new novels together. “But they’ve both got a bit of a gothic link.”

The books are definitely very different. Purcell’s The Corset is a “gothic chiller” set in Victorian London. According to Turton, it’s a novel “that you can give to almost every reader and they will find enjoyment in it.”

Shortlisted for The Costa Book of the Year Award, Turton’s debut, The Seven Deaths of Evelyn Hardcastle, merges Agatha Christie with Groundhog Day and Quantum leap. It’s your favourite murder mystery, but with a sci-fi twist. The protagonist embodies one character for the duration of a day, before starting all over again in a different character’s body. With each repetition he hopes to get closer to solving the mystery and saving Evelyn Hardcastle’s life.

“That sounds mad,” Purcell remembered thinking, when she first heard about Seven Deaths. “I thought it’s either going to really work, or really not — and it really works.”

The relationship between their work and their respective genres was something Turton and Purcell were eager to talk about. “They’re not straight retreads of the genre,” Turton said, “but they’re affectionate nods to their genres.”

Writing in a genre means placing yourself in a long lineage of writers. Purcell discussed how this is a difficult thing to do as an aspiring writer: “you end up starting off in a weird fan-fiction way.” She had “always been a big fan of classic books. Dickens, Jane Austen, Brönte, Thomas Hardy. My imagination plays in the past a lot so I’ve always set my novels in the past, and during periods I know a lot about.”

Turton has been a life-long fan of Agatha Christie. “It’s really hard to write an Agatha Christie book, as I discovered trying to do it. I tried to write in her style and it didn’t work. Which is why I ended up putting this sci-fi, fantasy stuff in it, to make it my own.”

Both authors clearly take on pre-existing genres and make them their own. What struck me as new in both their works was the way that both authors shift perspectives throughout their novels. The Corset is told through a joint narrative, where chapters switch between the perspectives of the two main characters, and the protagonist of Seven Deaths is literally put in other people’s shoes, sees the world through their eyes.

Purcell said that “if you see someone through someone else’s eyes, it’s really effective. Ruth [The Corset‘s main character] comes across as quite bolshy and a bit evil, but when you see her through the eyes of her prison visitor, you realise how pitiable she can be.”

Both novels are set in the past, though Seven Deaths is “not actually set in an exact time period. It’s in a sort of fantasy realm.” The Corset, like Purcell’s best-selling debut, The Silent Companions, is set in Victorian Britain, and its historical accuracy makes the narrative all the more affecting.

Purcell believes in doing deep research before (and during) writing. She “did a lot of research into Victorian seamstresses and how terrible their working conditions were.” She even “did an online sewing course, and learnt to make a corset by traditional methods.”

A large chunk of The Corset explores the strange pseudo-science of phrenology — many Victorians believed that the shape and size of someone’s skull said a lot about their character. To write well about the subject, Purcell “taught [herself] phrenology using the self-instructors that were around at the time.”

Turton added that The Corset “is impeccably researched, but at the same time, you can’t be too enamoured to your period.” Purcell agreed. When she began her first novel, she “was writing it too period. When I first started writing, I was very mannered and Victorian, because I’d read a lot of Dickens and Hardy. I wanted to make the book like that, but to a modern reader it’s just unreadable.”

While Purcell clearly spent a lot of time researching, Turton had a more direct approach. As he was writing an Agatha Christie novel, not a historical one, he wasn’t tied to historical fact, instead opting to recreate a historical tone. He called his process “method writing — where I feel like I have to go out and actually experience what I’m writing about.”

The method-writing style is clear in the water-tight plot of Seven Deaths. Reading it, it’s clear that Turton had thought through each minute detail. Because of this, readers can zip through the 500 pages of Seven Deaths, propelled on by dynamic plot twists.

The length of the book is justified, there’s not a detail in it that isn’t significant in some way. Turton dislikes novels where, for example, “there’s about five pages of description about a hill. I don’t need that, because I know what a hill is. I needed to get my point across in about two lines.”

“The idea of what a novel is has solidified over the years,” Turton said. “When Dickens was writing, a novel wasn’t really anything, so it could be anything you wanted it to be.”

With The Corset and The Seven Deaths of Evelyn Hardcastle, both Laura Purcell and Stuart Turton keep a bit of that idea alive, that a novel can “be anything you want it to be”. And it’s novels like these that readers want more and more of.