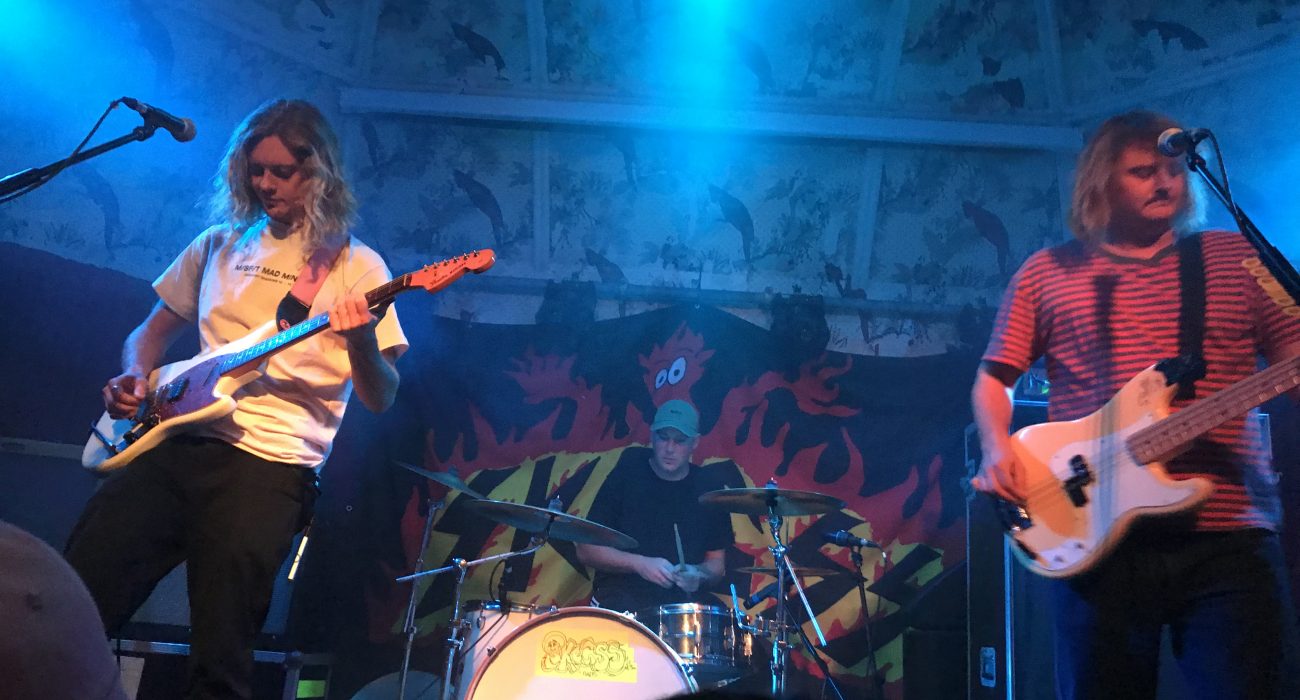 Really bloody fun are three words that ultimately sum up the experience of seeing Skegss live. Lyrics about beer, skateboarding, and days spent on the beach in Aus coupled with lead singer Toby’s washed out vocals and choppy, sun-bleached guitar riffs transported a rain-drenched Deaf Institute into the midst of an Aussie summer day.

While there’s nothing particularly unique about their music and they generally follow the same 3 chord formula and whistling summer melodies of every other blonde, long-haired Aussie band, Skegss are refreshingly aware of this fact. Before playing ‘Road Trip’ bassist Toby giggled “this song is about nothing, fuck all.” The band never pretended to be there for anything other than a good time, a welcome reminder that not all music needs to be super deep. Slower songs such as ‘Road Trip’ were made heavier for the performance and while this worked, the mellower album version may have made a welcome change from the punk bangers and would have brought some variety to the set.

The performance was far from perfect; the band slipped up several times and had to start songs again. However if anything this only aided their fun, slacker image and proved that the band don’t take themselves too seriously. They also demonstrated their laid-back attitude when halfway through the gig, guitarist Benny and bassist Toby swapped instruments and surprisingly played just as well as they had before. This sums up the band; ironic surfer rock but performed by a band so talented and good at what they do that their self deprecating vibe seems almost totally unwarranted.

The band’s set of 3 minute punk songs were a direct assault on the audience who charged around the mosh pit with stamina that only such a young and dedicated audience could muster. Despite the set only being an hour long, this was probably welcomed by both the band and the audience who both gave the night their absolute all.

The band gave the impression of having great fun and there was a lot of banter with the audience, enabled by such a small venue. Lead singer Benny also dived into the audience during their final song, ending a relentless performance on an explosive note. The band also seemed extremely grateful, commenting that the gig was their favourite on the tour so far, a reminder that the band are still relatively unknown on this side of the world.

Despite most of their songs sounding the same, this was welcomed by the audience who couldn’t get enough of the sound. Although their debut album My Own Mess was only released in September, the fiercely passionate audience gave the impression of having followed them for years. Whether you were a die hard fan or someone who had never even heard of them, the band made sure you had the time of your life.

You may think that the world doesn’t need another Australian surf rock band but if they all were as talented as Skegss then I think we’d happily welcome them all.