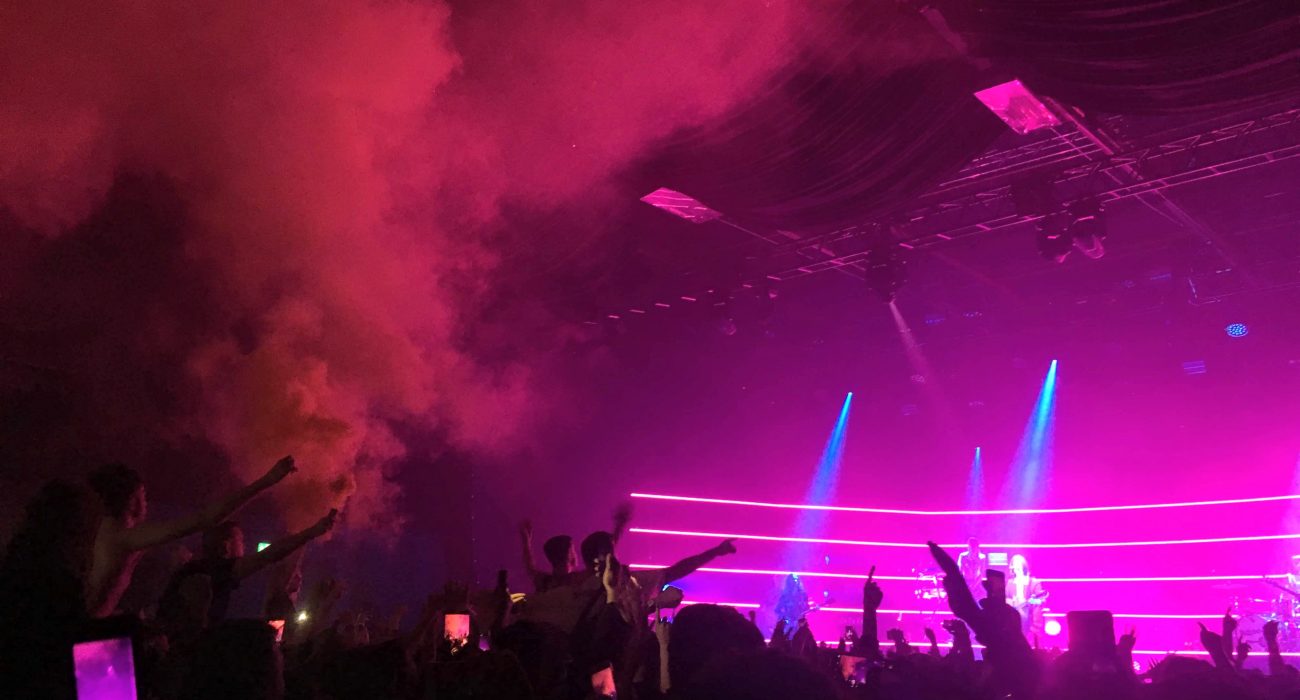 Only two albums in and Blossoms have proved they can fill Victoria Warehouse, not only once but twice. It’s an impressive feat for a band that were playing small festival stages just a few years ago. The Stockport quintet are riding the wave of a successful second album and were met with a very Mancunian welcome on Sunday evening.

This was very much a Manchester band at a home gig. Pits had formed to the Courteeners, the crowd was cheering to The Stone Roses and singing along to Oasis even before the boys had come on stage. Luckily Blossoms had planned an equally dramatic entrance, strolling on amongst strobe lights, an audience-lit flare and Kanye’s ‘Black Skinhead’ which they merged into their opener; ‘I Can’t Stand it’.

This ability to play with their own music, as well as others’ and across genres really highlights the band’s musicality and is what makes it a joy to see them live, with gems such as the Beatles’ ‘I Want You (She’s So Heavy)’ embedded within their own music and sound. The set flowed beautifully, giving little time for rest or even applause between each song, with very little filler. This was a crowd-pleasing set list which seamlessly merged nostalgic classics such as ‘Blown Rose’ and ‘Honey Sweet’ with their electrified second album Cool Like You  – founded on synth and hints of psychedelia, highlighting the signature Blossom’s sound underlying both.

Whether they like it or not the band, at least here, have been embraced by Manchester’s young Brit-pop scene and this is something they very much played into on Sunday. With an encore including The Smith’s ‘Big Mouth Strikes Again’ and Tom’s signature solo section culminating in a chorus of ‘Half the World Away’ as well as a secret set at YES just the other week, the band seem eager to spend as much time as possible with their home city.

Tom managed to calm the immense, high-energy crowds for just a moment and as the band left the stage he played ‘My Favourite Room’ alone. Whilst a single guitar attempting to fill a warehouse sounds slightly strange, his voice is all that is needed to carry the heart of the song through the audience; the ultimate nostalgic indulgence. In his usual style, Tom goes off-piste finishing his solo section with some Mariah Carey and obviously some Oasis, leaving the audience in their own happy singalong as he exits the stage.

The band returned for an impressive encore, including of one of their new, but already one of their most popular tunes; ‘There’s a Reason Why’ as well as a homage to The Smiths. This encore once again highlights the band’s ability to seemingly lift styles and ideas from anywhere they choose, especially from their Mancunian predecessors. The show closed with ‘Charlemagne’, the band’s ultimate classic, leaving the audience in a wild frenzy beneath the clouds of a couple more flares.

Tom retained his stage presence throughout and thus his place as one of the genre’s top front men but there seemed something lacking and it is undeniable that connecting to that large an audience is hard. Whilst the show was pretty much flawless musically some of the band’s energy seems to have been lost, possibly just out-shone by the audience or simply lost within the space.

Their music is beautiful, their stage presence captivating and their audience manic but there seems something slightly off when those three come together and perhaps it is simply the inevitable veil that must come between band and audience once they reach a certain level of fame. The recent release of a choral version of ‘There’s a Reason Why’ suggests the band is up for exploring their music a little more before settling fully into a signature musical and performance style, what with them still being a very young band.

Ultimately they gave the audience what they wanted – a jam-packed set-list, a Christmas tune, a Smith’s cover and what more could you want from a band returning to their hometown? Perhaps an audience that isn’t so distracting.