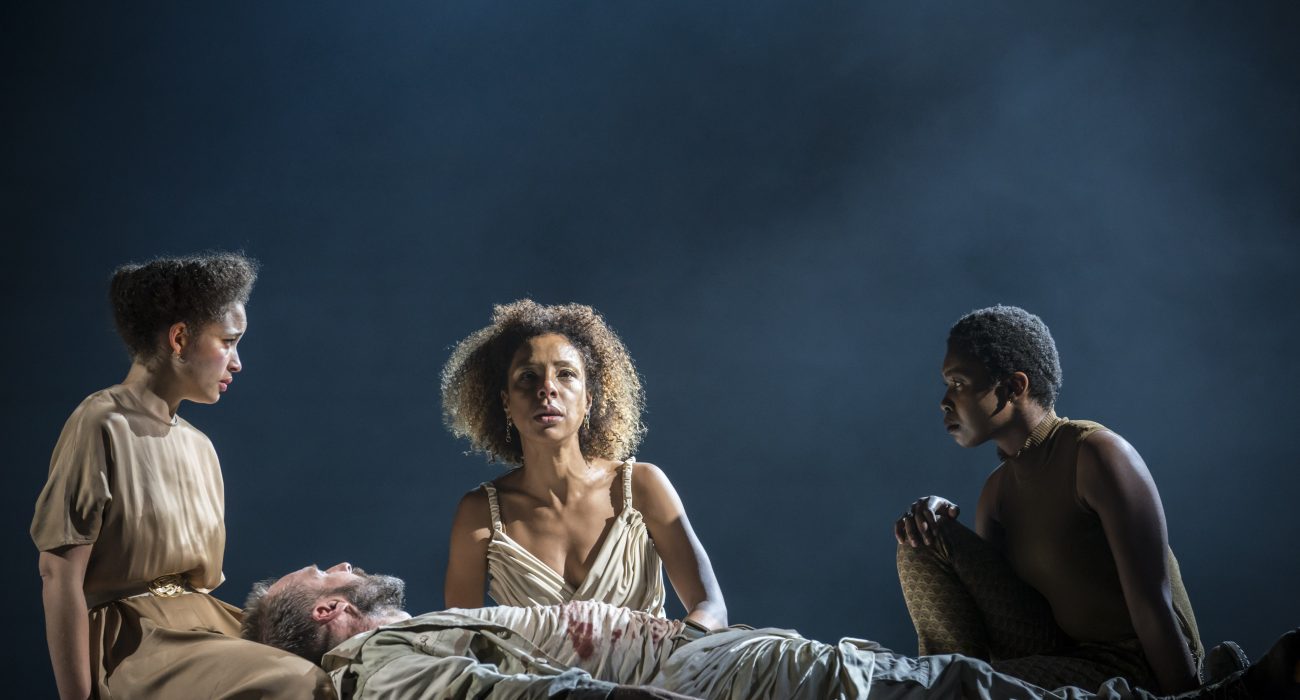 Ralph Fiennes and Sophie Okonedo took on the prominent roles of the tragic couple and delivered a performance that left viewers falling under their spell and wishing for their love story to flourish and never end.

Director Simon Godwin chose a contemporary setting for his production of Shakespeare’s tragedy; Egypt was seductive with a warm, inviting set design complete with pool and relaxing lounges, whereas Rome was a reflection of a rigid, cold and steely military base. From the set design to the costumes, without the actors speaking you were already presented with the juxtaposition of the two worlds which Antony tried to balance and bring together.

This was my first time attending a NT Live event and as a lover of the theatre I was sceptical about having to rely on a camera to catch every emotion, gesture and word. It was interesting to see a play in this format; the camera was able to zoom in on individual character’s facial expressions and therefore allow the viewer to clearly see the shifting intense emotions of grief, anger, and love.

This was especially the case for Cleopatra. Okonedo was exquisite in her depiction of the strong female lead, driven by her emotions and free will as Queen of Egypt. You could not help but be drawn to her in every scene she appeared in, her powerful presence on stage, and the close-up camera shots and angles emphasised this.

What’s more, the costumes designed for Okonedo made it impossible to miss her stage presence and aura. During the interval, a short film was shown interviewing costume designer Evie Gurney, and how she wanted to look at other female figures of power throughout history when designing Cleopatra’s gowns. One notable gown was a yellow ruffled dress with billowing sleeves, an allusion to Beyoncé’s 2016 Lemonade music album as an example of the different types of female idols and representations of empowerment for women.

Ralph Fiennes too developed and conveyed his portrayal of the “noble Marc Antony” in such a way that he demanded complete and immediate attention from both the audience and actors on stage. The Roman soldier’s conflict over who he is and where he belongs – Egypt or Rome, Cleopatra or Caesar – was illustrated in such a way by Fiennes that as a viewer you too were caught up in the inner turmoil felt by the title character.

What was frustrating however having to rely on a camera was that during close shots of an individual or two characters, other figures on stage could not be seen. The audience lost what other characters were feeling and doing because the camera focus was not on them. For example, when the focus was on Fiennes, we lost Cleopatra and her reaction to his outburst of love and devotion to her. But perhaps what I missed most was the intimacy and complete intensity of the characters’ performances that cannot be reproduced via a camera and broadcast. While I praise the entire cast for evocative performances and well-developed characters, the viewer lost that connection between audience and actor because every action, gesture and emotion were being filtered through a camera.

The character of Eros, played by Fisayo Akinade, stood out for me because of his utter devotion and love for Antony, his friend and leader. The scene in which he kills himself so that he would not have to suffer the pain of Antony dying was one of the most engrossing and heart wrenching scenes of the entire production, rivalling that of Antony’s botched death. Akinade took on a role that projected him from secondary character status to scene stealer, an undoubtedly strong presence on stage.

The tumultuous romantic relationship of Antony and Cleopatra was incredibly illustrated on stage by Fiennes and Okonedo, and the supporting cast and director Godwin succeeded in telling the story of a couple in love despite their apparent differences and worlds colliding. Although I did lose some of the intimacy because of the camera acting as a mediator between viewer and actor, the intensity of the performance largely remained and as a result, I was gripped from beginning to end.