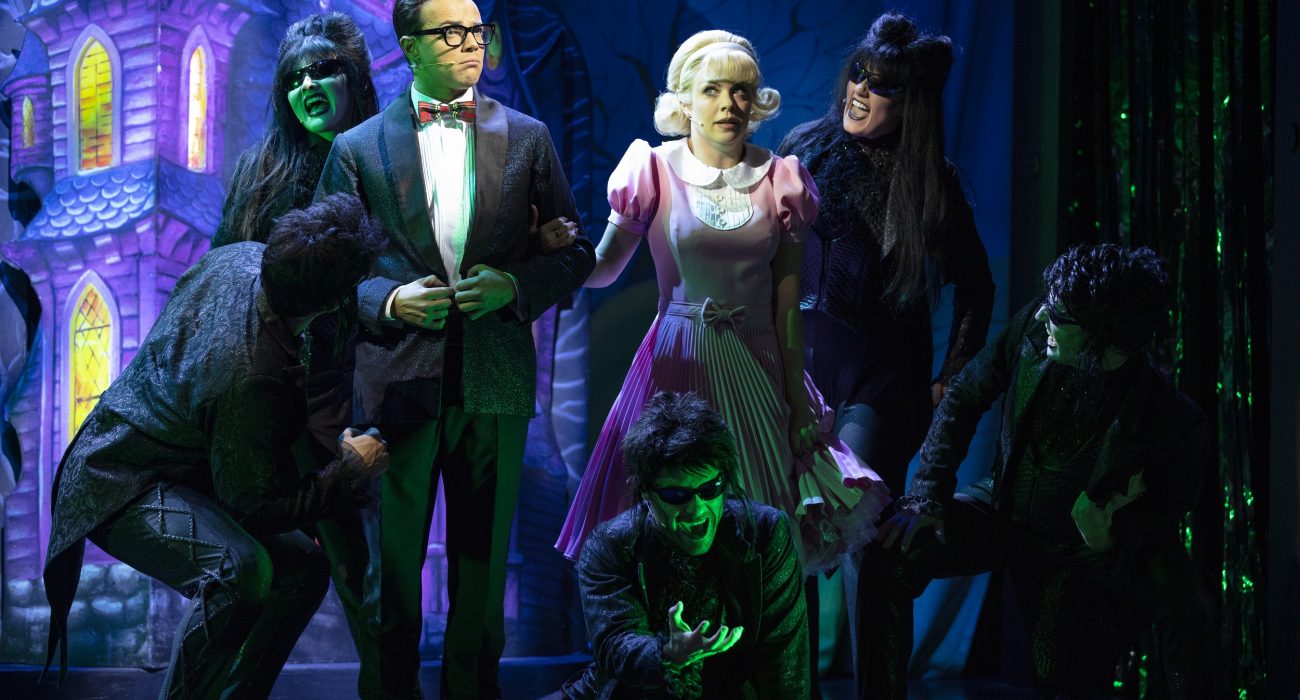 Right from the get-go, The Rocky Horror Show was an absolute blast. The show opened with a young woman in a crazy blonde wig and silly pink dress; it was clear from the beginning that we were going to be treated to two hours of crazy ‘science fiction’ campness.

Most people have seen the classic film adaptation, The Rocky Horror Picture Show, starring Tim Curry and Susan Sarandon, which is hard to live up to. The Laverne Cox remake received negative reviews; some things are better left alone.

But this production was brilliant; I’m glad the stage version continues to tour. Strictly Come Dancing professional Joanne Clifton and A1’s Ben Adams played the annoyingly sweet and naïve protagonists, Janet and Brad, a sexually inexperienced young couple who get lost on their way to meet an old tutor. Their chemistry was delicious. Clifton and Adams previously starred together in Flashdance, so I had no doubt they would make a convincing couple. They were both triple threats: superb singing, acting, and dancing.

Callum Evans played the titular character, Rocky, a reanimated corpse, à la Frankenstein, but physically perfect. His voice, dance moves and acrobatics (and his body, of course) were all top-notch. Beverley Callard (from Coronation Street) was the narrator and her interactions with the audience were a highlight, as she responded to Rocky Horror-regulars’ classic shoutouts (many of them in full costume).

The star of the show, however, was Stephen Webb as the “sweet transvestite,” Dr.Frank-N-Furter. He had brilliant campness, sex appeal, and confidence. Webb was nothing short of freakishly fabulous.

The set was fantastic, made up of an oversized metal film reel running above the stage, which was a perfect nod to old cinema. The way the wonderfully cartoonish set pieces flipped and turned so rapidly, like in a 20th Century sci-fi horror, was both amusing and impressive. The Time Warp was just the beginning of the entertainment and it had everyone on their feet showing off the infamous choreography. A strange design choice, though, was locating the orchestra on a gantry above the stage rather than the orchestra pit, meaning we could hardly see them and we were only reminded of their presence during the curtain call.

I loved the sexual fluidity championed in the show. The characters are proud and unashamed of being “different”, (in this case from outer space). The ending was out-of-this-world (literally), and too cheesy and funny to feel any sadness over the, well, sad ending. The audience member in front of us kept asking his friend questions. The problem was not that he had no idea that you are supposed to have no idea what is going on. It’s The Rocky Horror Show: it’s camp, confusing, and crazy!

I left the show with so much joy. This was my first time encountering the Sweet Transvestite from Transsexual, Transylvania, but, next time the show tours, I will certainly do the Time Warp again!