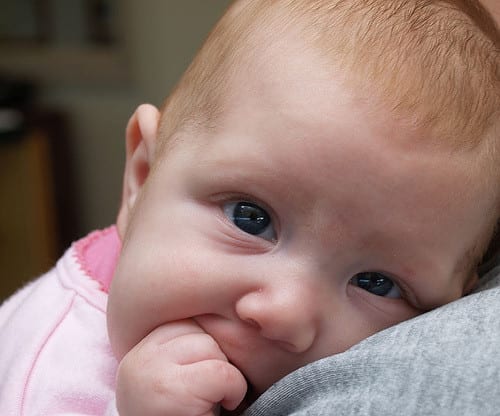 Research suggests babies can pick out words in speech

Research published by an international collaboration of scientists from SISSA in Italy, the Neurospin Centre in France, the University of Liverpool, and the University of Manchester suggests that newborn infants are able to distinguish individual words.

The study, funded by the European Research Council, worked with three-day-old infants and played them a stream of sounds. The audio clip were composed of four meaningless words buried in a stream of syllables. Using a technique called Near-Infrared Spectroscopy, which shines light into the brain, the researchers were able to measure how much was absorbed, telling them which parts of the brain were active.

The international team underwent several experiments to determine whether infant-directed speech is registered differently in a developing brain than other forms of stimulants (e.g. visual), and whether coherent words were interpreted differently than non-coherent words.

Dr Perrine Brusini of the University of Liverpool noted, “We then had the infants listen to individual words and found that their brains responded differently to the words that they heard than to slightly different words… This showed that even from birth infants can pick out individual words from language.”

Dr Alissa Ferry from the University of Manchester stated, “We think this study highlights how sentient newborn babies really are and how much information they are absorbing… That’s quite important for new parents and gives them some insight into how their baby is listening to them.”

Dr Ana Flò of Neurospin added, “Language in incredibly complicated and this study is about understanding how infants try to make sense of it when they first hear it. We often think of language as being made up of words, but words often blur together when we talk. So one of the first steps to learn language is to pick out the words.”

The research suggests that even at three days old, human beings are able to pick out individual words from speech (even if they cannot comprehend their full meaning) using tools that they are born with.

Previously, other studies have found similar findings conducted with infants. For example, scientists at the University of California showed in 2011 that babies just over a year old process words they hear with the same brain structures as adults, and in the same amount of time. Moreover, the researchers found that babies were not merely processing the words as sounds, but were capable of grasping their meaning.

This recent development builds on the work carried out in previous studies, and is essential as syntax and language comprehension in infants is still poorly understood. It is especially significant as it is one of the first investigations of its kind to observe these behavioural patterns and brain responses in infants at a significantly younger age (less than a week old) than in any previous studies.