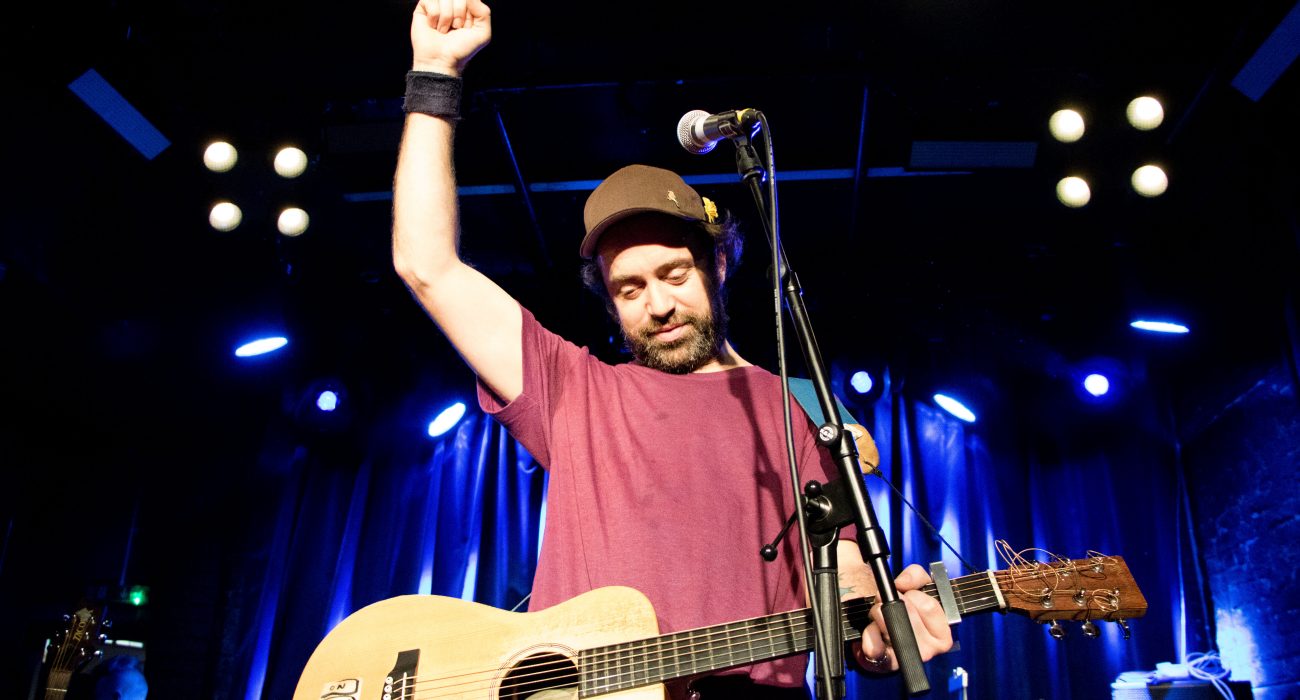 In Conversation With Beans On Toast

Beans On Toast is currently halfway through his latest tour, and seemed very excited to be back in Manchester, stating that he has “got a lot of love for Gorilla as a venue, and Manchester as a city.”

Beans On Toast has released an album a year for the past ten years, claiming that it is “a natural output” for himself to continuously write and release records. One main motivation behind this is that he can “constantly keep touring and playing festivals, and (he) play(s) them year in and year out.” Although with releasing an album on the same date for a decade comes the worry for Beans On Toast that there is a “gimmick aspect” and the pressure that coincides in fans expectations. Beans does hide this well though as he presents himself as a casual and off-the-cuff musician despite his expression that the thought of predictability rests uneasily for him.

When asked what inspires him to keep writing so many songs, and whether he struggles to write on the road, Beans responded that tours were a great time to gather inspiration and ideas for songs, but most of the writing happens when he’s at home, with Beans stating “generally I write songs when I smoke weed and I don’t smoke much weed on tour!” Beans reminisces that he first tried his hand at songwriting at the age of just sixteen and “really liked creating something out of nothing and I’ve literally never stopped.”

With a die-hard Beatle Maniac for a mum, and a country-western super fan for a dad, Beans On Toast had an abundance of musical influences since being young and seemed destined for a life as a performer, claiming that “at school when they asked me what I wanted to be when I grew up I’d say, Michael Jackson.” Beans continued his love for music and performing as he grew up, which is evident from when he started his first band “before (he) could play an instrument.”

Music clearly continued to play a vital part in shaping Beans’ adolescent years and the North London venue The Garage was a big part of that. Having grown up in Essex, Beans recalls going to The Garage for the first time when he was 17 and having his first experience of an indie night club. Beans immediately grew fond of the venue and “used to bunk the train up every Friday night.” Beans went on to host his first club night at The Garage, and even admitted to having had “sex on the stage a few times” which he went on to describe as “weird knowing there were 300 people dancing on the other side.” The Garage venue seems to be an incredibly nostalgic and influential venue for Beans and retrospectively revealed the significance of his first trip to the venue when he was just 17, stating that it “changed (his) life.”

Beans On Toast will be touring until the end of August and it wouldn’t surprise me if there’s another album released at the end of this year seeing as Beans revealed he’s already “got loads of new songs in my head and I’m thinking about the new record.”

However, I can officially confirm that Beans On Toast is in fact not a fan of the delicious delicacy himself. He is, and I quote, “more of a spaghetti hoops man.”