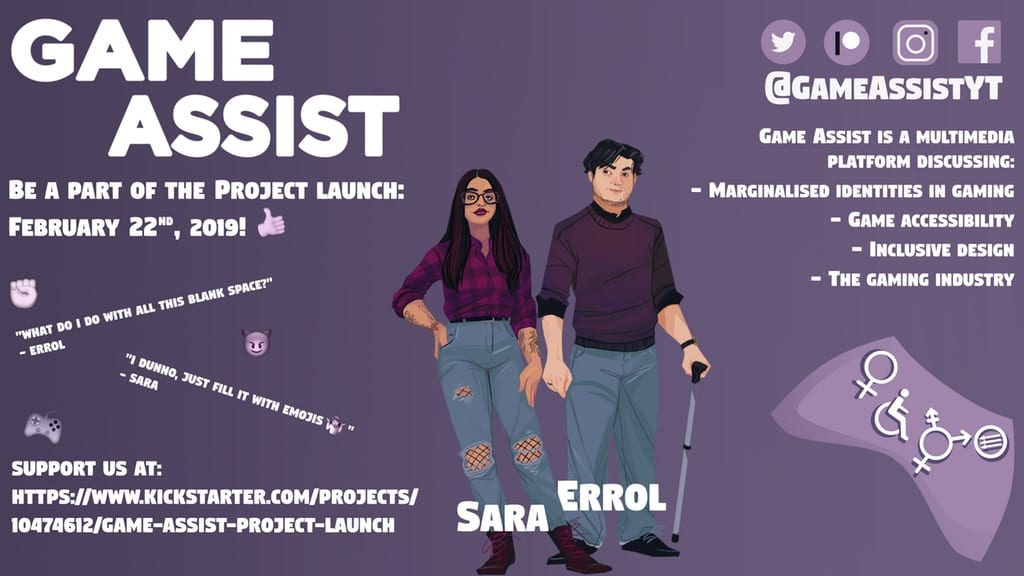 Having successfully kickstarted Game Assist earlier this year, Errol Kerr and Sara Khan were full of enthusiasm for the project. The upcoming multimedia platform, which aims to review and critique all things representation in gaming, will launch on the 22nd of February, with a website earmarked for mid-March.

Sara and Errol, a self-described “pair of gaming enthusiasts and liberation activists” have an impressive C.V. in these areas, having been involved with National Union of Students LGBT+ Campaign, Autistic UK, Newcastle University Students’ Union, and the University of Manchester Students’ Union. I sat down with them to find out more.

“Initially Game Assist was a platform to review just game accessibility. I was looking at basically only at how you play the game,” Errol explained.

“Sara got in contact with me in December, saying this is a great idea but why don’t we go one bigger? So now the aim is looking at representation as well as accessibility in video games.”

Sara expanded on this, noting her own formative experiences with video games and the transfigurative effect that looking back on them retroactively had had, saying, “the reason I came to Errol with the idea of expanding it to include general representation is because ever since I was a kid I used to play games with my older brother and never really caught how people of colour are represented.”

“I grew up on a lot of Call of Duty video games until it got to the point I couldn’t play anything but zombies because it made me really uncomfortable having to shoot nameless populations of brown people for no discernible reason.”

Call of Duty was just the first game of many that came up in my conversation with Errol and Sara, a list including – but not limited to – Wolfenstein, Life is Strange, Until Dawn, Anthem, Mass Effect, Apex Legends, Detroit: Become Human, Kingdom Come: Deliverance and Resident Evil.

Indeed, Errol and Sara’s insight on issues around depictions of sexuality, race, disability, and mental health was borderline encyclopedic, so numerous were the case studies they were able to talk about.

“Once you start thinking about it, you can’t unsee it, but it doesn’t ruin the experience. Rather than spoiling the content, it allows you to see it through a new lens,” remarked Errol.

In an era where the games industry is still in a period of adjustment when it comes to matters related to accessibility and representation, Errol and Sara did acknowledge that positive change was taking place, but advocated that there was still much important work to be done in a medium that is perhaps more psychologically impactful than some give it credit for.

“As someone who is autistic, I learned most of my social cues from video games,” explained Errol.

Although he was half joking, Sara went on to stress how important games are as cultural artefacts, and how influential they can be, saying that “games have a potential to influence our way of thinking in a really unique way because of their interactivity.” Indeed, when our conversation turned to some of the more offensive games found in Steam’s deepest recesses, she noted that “someone can access those, play those, and think its acceptable and take that to heart. And that in itself can be violent.”

Their vision, therefore, is to create a platform where people can “analyse and talk about video games in the way people do about films and books; to realise that games are just another form of media, just significantly more interactive.”

However, their emphasis was not just on criticising the games industry where it is deficient, but on highlighting positive depictions.

Indeed, Errol, as someone who described himself as “more broken by the day,” spoke about the power of games that really engage with subject matters around disability, citing the frustration felt in games like Wolfenstein II and Mass Effect 3 as thought-provoking examples of characters who got on with their missions and were still essentially heroes, but who struggled with the perceived injustice – or simple inconvenience – of living with a disability.

Sara, too, spoke about how Life is Strange inspired her interest in exploring issues around sexuality in video games, saying, “as a gay woman, I never thought I’d see myself in a game in that way and that really opened my mind to the potential of gaming.”

Whilst their purview with Game Assist will primarily focus on these in-game depictions, they also spoke about the importance of engaging with issues lying outside games themselves, looking at issues like staff rights within development studios and audience discourse on social media platforms.

Speaking about the former, Sara said that, “people rarely think about the process of production. You’re paying £60 for this game and people are being systematically abused to create it; you have something that needs to be talked about.”

On the latter, they were understandably more refrained, Errol saying that, “addressing the so-called toxicity within the community is something that I want to do, but something that I will do carefully and sensitively. Firstly, to make sure we don’t get too much hate, but also, we want to address it in a way that the wider community can look at it and learn from it. We don’t just want to tell people, ‘you’re shit’.”

This commitment to remaining discursive without being didactic was a sentiment that was echoed a number of times throughout our conversation. Given that conversations about social politics in any direction – and especially in gaming – can quickly become quite heated, Errol and Sara’s desire is to affect positive change without being overbearing, remaining constructive even when being critical.

“One thing that we do want to really pin down is if we’re talking about games that are good and saying ‘this is how they could do better,’ we’re not saying they’ve done badly,” said Errol.

“For example, Apex Legends has fantastic accessibility options; its representation is pretty damn good. What it could do is actually give those characters back stories.”

Sara explained exactly why this was, saying, “even though we might be seeing minority characters, I think most of the time it’s done in an arguably tokenistic way. You don’t feel like you engage with their stories, so I’d suggest something a little more nuanced.”

This approach to opening a reasoned discourse was very much what Errol and Sara aim to do with Game Assist. Whilst they admitted that “progress sells,” in the games industry, they were aware that it would take a lot of work to really bring it up to scratch: “To change an attitude throughout an entire culture, which is what playing games has created, it’s not just going to take people like me or Sara. It does take the publishers, the distributors; everyone needs to be involved in recognising when things are great and promoting those.”

For now, Sara and Errol will hope Game Assist can eventually be a major influencer in that directive.