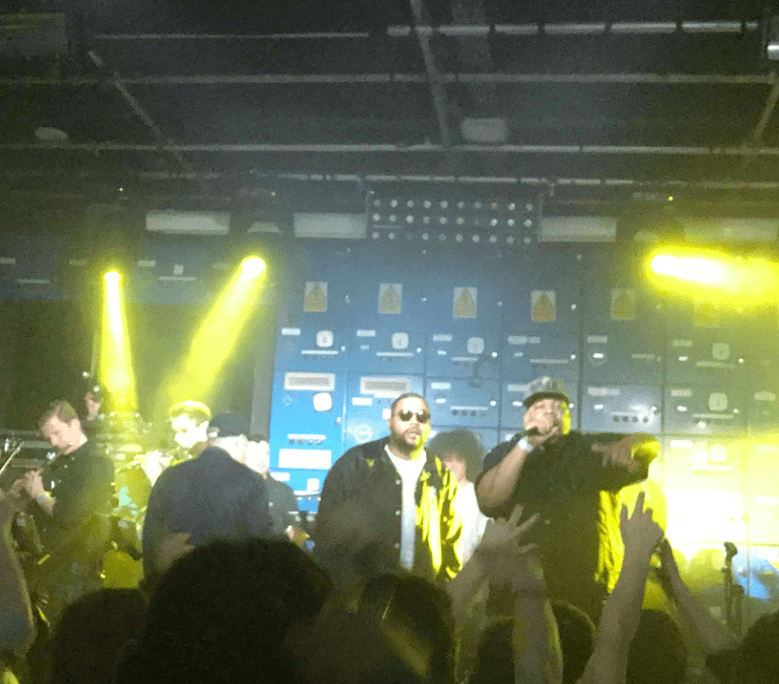 From the first 20 minutes of Slum Village’s set to a sold-out Gorilla, one thing had been made abundantly clear; while Slum are a legendary group in their own right, their ever-changing roster of MCs serve essentially as a platform to highlight the innovative production of J Dilla.

The show began with DJ Real taking to the booth to give a tribute to the legendary Detroit native. Real seemed to struggle with the fundamentals of DJing, mixing between songs poorly, failing to consider lengthy intros before changing tracks, and scratching to a redundant and annoying degree. Yet, despite the lack of cohesion between each track played, they were each met with roars of appreciation and recognition from the eager crowd when they eventually acknowledged the varied repertoire of J Dilla.

The group were fronted by T3 (a founding member) and Young RJ, a now fourth generation member. This would be problematic for any other major influential group. For instance, imagine if MC Ren started touring as NWA with some friends rapping the parts of Eazy-E, Ice cube and Dre. However, in Slum’s case, the legitimacy of T3 was enough to justify their performance under the Slum Village banner, as the core of the group’s sound had always come from J Dilla’s production.

After this slightly disjointed and confusing beginning to the show, it was time for the pair to take to the stage. Young RJ walked on in a Slum Village bomber jacket, wearing a backpack that he immediately deposited. He looked cool and groomed, in contrast with the oversized black shirt and cap of T3. They instantly got the crowd moving, the booming beats easy to rock with and the infectious earworm flows getting hands waving and clapping along, despite mic issues in the early third with Young RJ.

Regardless of the changing roster of performers, the chemistry between the two must be praised.  They worked off each other nicely, constantly attempting to outdo one another and create a greater frenzy in the crowd. They called back to other old school staples of hip-hop, weaving together with a surprise cover of ‘Rapper’s Delight’. I wasn’t wild, however, about the insistence of both men on filming the crowd from their phones. I guess this was to try and get a reaction for the camera, but it came across as slightly manufactured and took me out of the moment.

A highlight and a turning point in the show was the performance of the iconic ‘Fall in Love’ from Fantastic, Vol 2. Everyone was singing at full force, alongside DJ Real, who would occasionally belt out some notes throughout the show to everyone’s surprise (maybe he was a singer who they tried, and failed, to teach to DJ). From here, the show went from strength to strength. The beats got harder, the flows got colder and they managed to remain excited through to the closer, ‘Raise It Up’, providing an energetic finish. The best, however, was yet to come. Thankfully, the boys returned to the stage alongside the support for the night, Abstract Orchestra, an old school big band ensemble, who are best known for their Madvillain, Vol 1 tape, where they remake the beats of MF Doom. Hip-hop with a live band, especially a big band style such as this, becomes something so much greater, taking on a new form.

The encore was reminiscent of the Outlook Orchestra taking on the festivals’ biggest hits, but instead running through the closing tracks in a far grander and more entertaining manner. It rounded off the show very well, righting some of its earlier wrongs, mostly through the DJ, for which I can’t really blame T3 or Young RJ. I would recommend seeing Slum Village if you’re an old-school fan, as they dish out some iconic tracks and create a nostalgic atmosphere once they settle into the show.