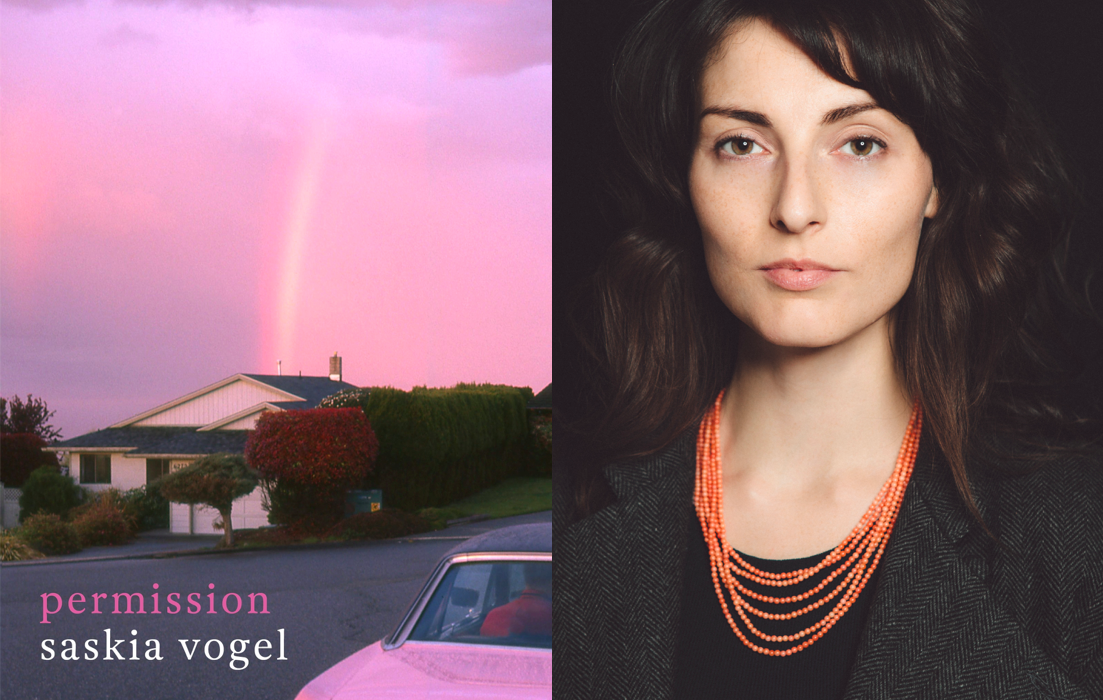 Both Echo and Piggy are infatuated with Orly, and the narrative orbits around her. Vogel “spent a lot of time considering perspective in the novel.” And in Permission, we alternate between both Echo’s and Piggy’s points of view.

“Echo’s parts are written in first person and I felt like I could speak about her journey with more authority. Piggy’s sections are Piggy’s stories as told to Echo as told to us in third person.” When writing Piggy’s stories, Vogel “wanted to play with what an aroused tone of voice would be. How desire might impact form.”

Echo’s sections are minimalistic and melancholic; Vogel’s well-wrought prose is stretched taut to cover everything from death and grief, to love and sex. While you’ll want to savour the writing in Echo’s narration, you’ll speed through Piggy’s sections, just as eager as he is to find some kind of conclusion.

The two sides of the novel have created “a split in the reviews so far,” with different readers preferring different narrators. Vogel said that “it was really important to me to have both a male and a female perspective, as the novel is about how the patriarchy fails us all.”

The one perspective we don’t get is Orly’s. “I didn’t want to speak for Orly but I also didn’t want her life to turn into just another story about a sex worker who’s objectified.” Vogel creates “a sense of both how she takes shape in their fantasies but also how becoming an object of fantasy is part of her job and something she enjoys.”

Orly enjoys becoming the person that Echo and Piggy need. She is a “a mutual creation of fantasy.” Vogel explained that “Piggy was someone who grew up during the sexual revolution but the sexual revolution wasn’t really for him. He wanted something different and we don’t always have the language and the skills to find what we want. Sometimes it’s inaccessible to us. That’s how literature felt to me for a while. Growing up in LA, publishing seemed so far away. Sometimes you need to go far to find what you want.”

Vogel has certainly moved a lot. “I’ve been an expat for most my adult life,” she said. “I came to the UK when I just turned 18, I went to high school in Sweden — I’m secretly Swedish — and I’ve had this long love affair with Los Angeles. It’s a long distance love.”

“There’s a kind of dizziness to LA that I really like,” Vogel said. “I wanted to bring together the madness of the city’s landscape, from the cliffs crumbling into the ocean and dangerous riptides just a few miles down from plastic beaches and some of the most intense urban spaces in the United States.”

These days, Vogel lives in Berlin and works as a Swedish translator— perhaps not so “secretly Swedish”. I asked her how working as a translator impacted the way she wrote Permission.

“Translating really humanised the novel for me. Novels can be so big when you’re thinking about starting.” She talked about how Raymond Chandler learned how to write crime fiction. “He copied out his favourite crime story again and again until he understood the mechanics of the story. I feel like translation gave me that same gift.”

When asked which Swedish writers she would recommend, Vogel didn’t pause. “Lina Wolff 100%. She’s one of my all time favourite writers.” Wolff’s latest novel, The Polyglot Lovers, comes out in the UK this May.

Certain parts of the novel seem a little too familiar; Echo navigates the world of predatory casting agents and misogynistic musicians. But these men are marginal in Permission. When Echo is subjected to their male gaze, there is less a sense that she stares back defiantly, but rather that she stares beyond.

This perspective has lead some to call Echo a passive character. Vogel agrees. “Her passivity is the place from which she needs to come of age. She’s kind of poisoned by her environment— she just expects that things will work out.”

“There’s a strong tendency to grow up with princess fantasies, to grow up thinking that one day your knight in shining armour will rescue you. At the beginning when Echo is musing about what role she thinks love will play in her life, she is waiting for a force to shape her. I think that’s where she gets her interest in acting. She’s lost in a way, she might very well be happy to play any role, as long as she is given one. That’s what she breaks out of in the novel.”