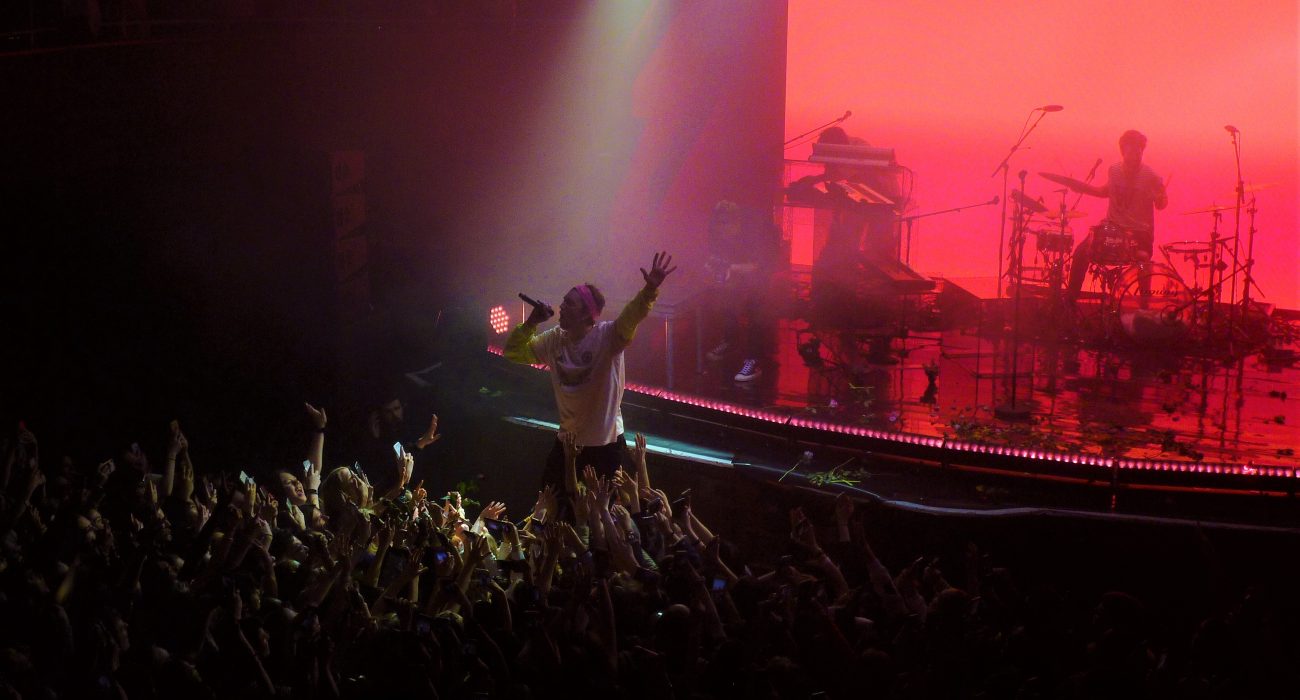 Manchester’s Albert Hall was buzzing: the crowd cheered loudly as Jake Goss took his seat behind the drums, Les Priest at his keyboard, waiting for lead singer Paul Klein to take his spot behind the mic. Wearing a neon yellow top, a white Manchester United football shirt with a guitar slung across his chest and a pink headband taming his wild hair, Klein looked like he had rolled off the LANY tour bus straight onto the Albert Hall stage.

LANY (an acronym for Los Angeles New York) are currently on an 88 date world tour, taking their emotional synth-pop global, following the release of their second album Malibu Nights. With over 3 million monthly listeners on Spotify and having supported pop artists like Halsey and John Mayer, the band are no strangers to pleasing their fans with a big show.

Lines of lights flashed at the front of the stage as Klein started the set, saying rather than singing the lyrics to their hit single ‘Thick and Thin’. As the crowd threw roses on stage, Klein asked “What are you thinking? You were happy last weekend… How’d you forget? I was your best friend”. Digital checkerboard pattern lit up the backdrop behind as he then launched into cheery renditions of ‘Good Girls’ and ‘4EVER!’. Catchy yet mournful, ‘Yea, Babe, No Way’ was the perfect lead-in track for ‘I Don’t Wanna Love You Anymore’, the second single off Malibu Nights. Sat at a clear piano playing his electric keyboard, Klein remained quiet while the crowd sang “Sometimes I just wanna talk for a minute / But I can’t bring myself to call / Because I know that your heart’s not really in it / And whatever we had is gone.”

The Malibu Nights album discusses the heartbreak Paul Klein experienced after his relationship with Grammy-winning singer Dua Lipa ended. Released only a year and a half after their self-titled debut album, these are certainly LANY’s most vulnerable tracks to date – a balanced blend of relatable lyrics which fans can find themselves in, and a polished up-tempo sound, courtesy of Mike Crossey – the producer behind many of The 1975’s biggest hits.

Like The 1975’s most recent tour setup, the digital backdrop changed again, turning to a blue screen displaying the lyrics karaoke-style for ‘Taking Me Back’ – another dreamy synth-pop banger – before changing again for ‘Made In Hollywood’. Klein jumped off the stage to get closer to his fans, set on crowd surfing whatever security said. Astonishingly, he seemed to maintain perfect vocals, much to the delight of his fans who were jostling him around, trying to keep him afloat. Klein then returned to the stage to sing ‘Hurts’ and ‘Run’, beaming as he treated the fans to some goofy dance moves.

Despite the happy sounding music, the lyrical topic of heartbreak continued as Klein slowed down to sing ‘Valentine’s Day’. The song about missing someone and wondering if they were the best you will ever get, led in well to the next track, ‘If You See Her’. LANY then performed some of their earlier tracks, beginning with ‘The Breakup’, from their self-titled debut album, before playing ‘Pink Skies’, from their 2016 EP Kinda. ‘Hericane’ followed, slowing down the pace as Klein lay on the stage, his melodic tone blending perfectly with the slower synth background.

Co-written with Ryan Tedder of OneRepublic, ‘Super Far’ was one of the standout songs of the night, with the crowd bouncing about to the chorus “If this is love, I don’t want it”, before turning quiet for ‘Malibu Nights’. The piano-driven ballad was beautiful in its simplicity – just Klein’s voice stripped back, none of the usual LANY layered vocals.

After taking a break from the stage, the band returned to finish their set with rousing renditions of fan favourites ‘Thru These Tears’ and ‘ILYSB’. As Klein crooned the final lyric, “I love you, so bad”, the three men of LANY came together onstage, putting their arms around each other before taking a bow, while the crowd whistled on, hollering their love back at the Albert Hall stage – a triumphant end to an electric set.