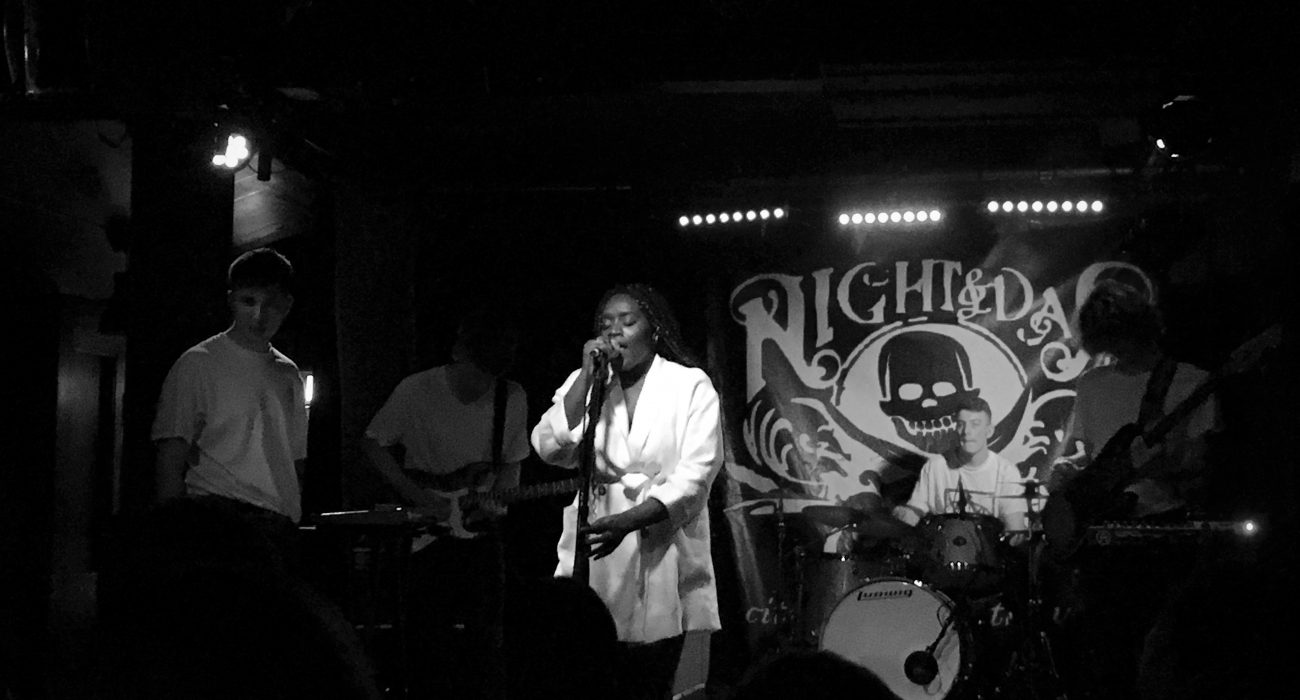 Mercy opened her first Manchester gig (supported by Salute the Sun and Aaliyah Esprit) to the Northern Quarter’s most cosily decorated venue, Night and Day Café. Beneath the lanterns hanging from the venue’s ceiling, she and her band or ‘Cartel’ appeared on stage dressed all in white, heads lowered as her voice cut through the noise of the café.

Via a pre-recorded tape she opened up about her history with mental health, her immediate vulnerability drawing the audience towards her as the band moved into their first song. This raw honesty pervades Mercy’s work as a singer, songwriter, and producer, and the openness about past relationships and her struggles with her own mental health are themes she’s not afraid to express or talk about.

Originally from Essex, the now Bristol-based band were formed after Mercy dropped out of university in pursuit of her creative dreams, starting her own music agency and embarking on a journey of independent self-production, following in the footsteps of those such as Chance the Rapper. Whilst online her music oozes a beautiful charm, when performed live it takes on an entirely new life. Utterly soul-lifting, her voice is silkily angelic and completely entrancing.

Combining Nigerian Afrobeat influences, elements of R&B, funk, pop, and soul she creates an electric sound that makes you want to move. As a frontwoman, it’s not hard to imagine her headlining the Apollo and even the Arena one day; she’s down to earth, funny and honest. Inviting her band members to freestyle in the songs breaks’ reveals a talent and professionalism impressive and relatively uncommon for such a young group of musicians. The band itself is carefully curated and perfectly balanced; it’s obvious they love playing together, making them a joy to watch and, for those few moments at least, feel a part of.

The set list included a cover of Dua Lipa’s ‘New Rules’, electrified with the incorporation of Afroeats and Mercy’s own voice which lifted it up and away from the original. For original content, the up and coming band are already pretty prolific, with two singles, an album and, most recently, an EP to draw on. ‘Hot Jam’, the opener of her 2019 EP D.Y.E was, understandably one of the crowd favourites, with a romantic, meltingly soft opening falling away as the beat rolls in, building up before breaking into rap. ‘Jack’s Ride’, the second song off the same EP uses her ex as a muse – someone whose support helped her through a tough time, but, in her own words ‘shit happens’ and it’s a testament to Mercy that she can transform these experiences into life-affirming, and even catchy, gems of songs. The gig culminated in an encore of ‘Caution’ the perfect tune for a dance, ending on a real high.

Lyrically the music touches your soul, giving you that tingly feeling you can only hope to find in such a young band. Mercy’s spoken about drawing on icons such as Amy Winehouse and Whitney Houston and their beautifully tragic lives whilst recognising her own value in not wanting to end up like them. Her bold and real lyricism is something we crave, especially from popular music, meaning this is truly music for the club, the radio (debuting recently on BBC’s Introducing shows just how far this young woman has come already) and for you, lying on your bed, headphones in on one of those days you just need someone who gets what’s going on in your head.

Mercy doesn’t just use her incredible musicality to express her views, speaking out on social issues such as race, mental health and youth culture in the press and even being voted third in Bristol in The Barclays & The Tabs Future 100 Women to Watch in 2017. When introducing the third song off her latest album ‘Lime Time’, the name reflecting the ward to which she was admitted, she reflects on the importance of not staying quiet about her mental health issues, especially as a young Nigerian woman growing up in the UK. Family and her Nigerian heritage are obviously important influences within her music, dedicating her set to her family in the front row and calling on musical influences from her upbringing, the legacy of which has been passed through her family.

Her Doubt Your Existence tour continues, playing Camden on Monday 25th and then finishing back in Bristol on the 30th March, and if you’re around we highly recommend you check her out. With musical, entrepreneurial and writing talents like these, you don’t need us to tell you to watch this space; this young woman is going places, and fast.