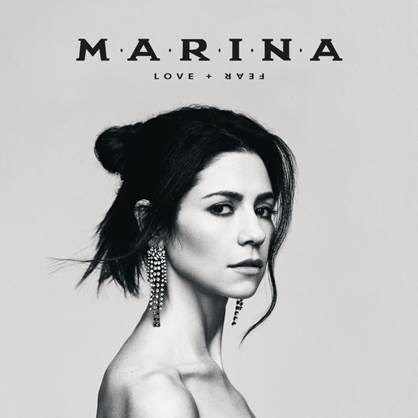 After a four year break MARINA has finally returned with a new music concept which is set to cover two seven track albums. Her return reveals the rather sad loss of “the diamonds” moniker (which was a reference to her devoted fan base). The newest albums are set to depart from the ferocious intensity portrayed across the masterfully produced 2012 Electra Heart and 2015 Froot. Instead, MARINA seems to be focusing quite prominently on the themes of happiness and contentment over the vivid characterisation in her previous incarnations.

The first installment Love traces her recent journey to recovering from loss and adjusting to change in health. Upon this knowledge, I was initially impressed although ever so slightly concerned. I hoped her time away from songwriting would not jeopardise the quality of the content.

However, after hearing the first single release ‘Handmade Heaven’ I quickly sidelined my fears. This track is without doubt vastly different from anything MARINA has released before but it has a beautifully stripped back quality. Deeply reflective upon the environment and nature, it captures her gentle side with a real lyrical elegance. A slow and brooding synth compliments her sparkling vocals with a noticeably more subdued but undoubtably confident, relaxed tone.

This seamlessly flowed into the other tracks including stand out single ‘Orange Trees’ which I did admittedly, at first find intensely annoying. The repetition of “orange” makes the first listen a tricky one and I would be lying if I said I did not skip the track a few times. However, it is clear that despite the lack of bold choices here, MARINA is still able to create pleasurable music. Although perhaps slightly disappointing in this aspect,  it is not a surprising move for an artist who has made a name for herself by regularly striking the balance in creating pop tracks without pandering to the desires of public and pop culture.

Tracks such as ‘Baby’ (her only track to be released in 2018) feature Spanish lyricism from Puerto Rican artist Luis Fonsi which is a really nice touch and reflects her newly experimental, culturally diverse take on pop music. Of course this is the only track on the record to explore this and therefore time will only tell if this is set to continue. This is nonetheless promising to see within her growing discography.

The album tackles some crushing moments of heartbreak, especially on ‘End of the Earth’ which bravely steps into the destructive nature of an intense relationship. The intensely melodic synth sound, again completes this track bringing this first instalment to a moody cliff hanger ending.

The second instalment Fear is set for release on 26th April 2019 and is set to follow a similar pattern to the first. Only in time will we discover the true content of this much darker sounding album but I can’t help but hope for a re-emergence of Electra Heart . Even if only for one track, just to know that bold, brave character remains just below the surface.