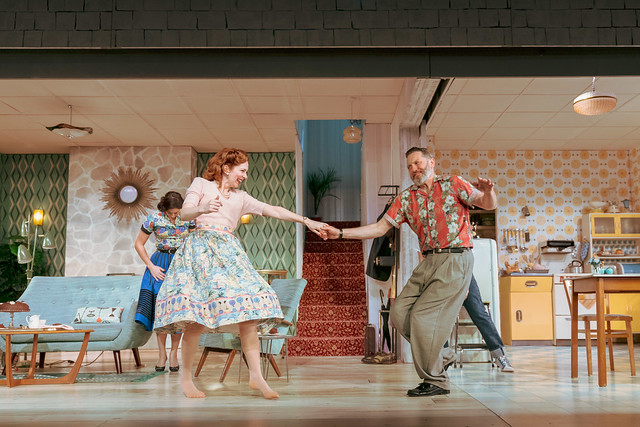 After being adequately intrigued by the synopsis of Home, I’m Darling I was quite excited to watch the show on it’s opening night in The Lowry Theatre, however the performance left me feeling somewhat bemused by its message.

Set in modern day, we follow the life of housewife Judy. She and her husband Johnny transformed their home and life into the 1950s, with dinner on the table to greet Johnny after work – slippers at the ready, a sixty-year-old fridge that only sometimes works, and an extremely loudly-decorated house which is quite aptly referred to as a “gingham palace”.

At first the message seemed clear, Judy was demonstrating a post-modern form of feminism, allowing her to be her true self, and exercising her right to choose whatever life she wanted. In fact this message was somewhat over-pedalled at first in opposition to her radical feminist mother who was disapproving of her lifestyle.

However, in the second half of the performance this message became muddled. If the play was highlighting the flaws and contradictions of radical feminist ideas, and we were we supposed to want Judy to be able to choose what she wanted, then why were we watching the life she so desperately defended fall apart?

Following a monologue from Judy’s mother, I was left thinking that indeed it was the radical feminist concepts against housework that the play was championing – or was it neither, and as an audience we were being introduced to the idea that no one way is perfect. Either way, I left feeling a bit aimless after the curtain call.

Katherine Parkinson’s performance was wonderful. Far from her performance in much loved The IT Crowd, however Parkinson kept the same quick wit and unmistakable facial expressions that made her character one of comic treasure in the hit show.

Other characters, such as Marcus – the best friend, were slightly overplayed. Some delicate topics were covered so brashly that the entire audience didn’t know what to make of them, with some audience members finding cues to laugh at the wrong moments. A particular example of this was during a heartfelt speech about non-consensual sex between a husband and wife in the 1950s. The tittering from the audience left me cringing at what was supposed to be a serious scene.

All in all the play was enjoyable for it’s comedic parts, it’s highly elaborate set design (which can only be described as an absolute triumph) and perfectly timed scene changes that fit the swing music and dancers beautifully. However, the tone didn’t quite fit the serious nature of the topics and political message it was trying to send.