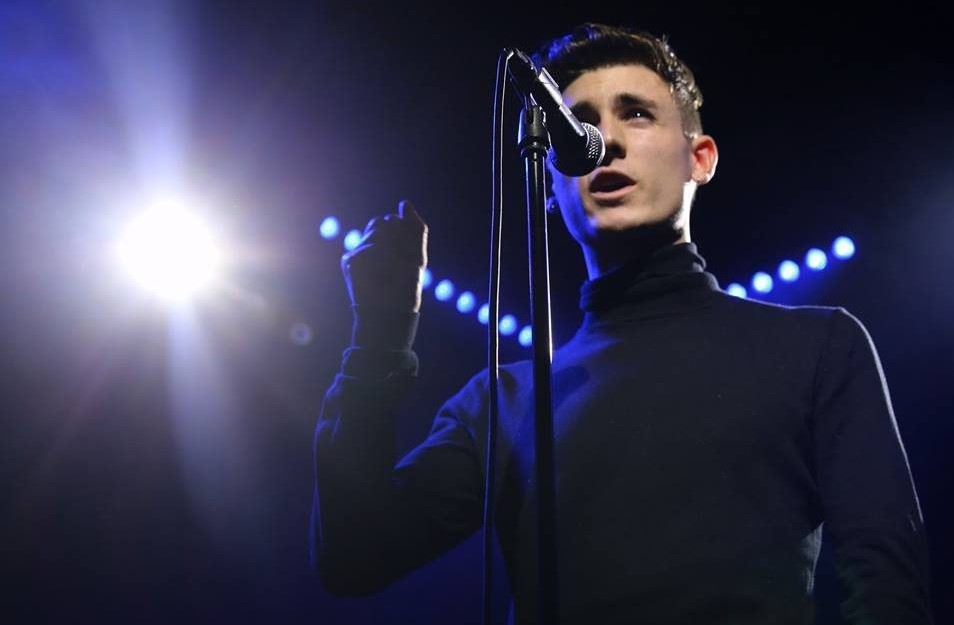 A broadcast from far away
You traced lines across my chest in BBC World Service hours
Ancient paths, scorched earth
Ancestral song
I listened

Deep breathing rose and fell
Hard grip, body heat
My lips followed your contours down
Until you arched your back

The BBC World Service hours were long
In my mind’s eye, I saw the blackness of oceans
Lighthouses on islands that flashed in the dark

Frank Radcliffe-Adams is a French and Spanish student at the University of Manchester and one of Manchester’s finest up-and-coming poetry talents. His writing is tethered in the real, close-cut narratives of scenes which spill out people’s lives. Much of Frank’s work maintains a narrative style that flows effortlessly, particularly during its spoken performance, which can then be suitably clashed with sudden comments, twists and turns, keeping the audiences on his hook.

Frank has performed at a variety of poetry and spoken word shows around Manchester, including SPEAK Poetry, Word War, Stirred Poetry, One Mic Stand, Oxjam, Gathering Speed, Too Shy, and most recently, Punk in Drublic’s 2nd birthday party. He has also appeared and read his poetry on Fuse FM’s State of the Arts radio show and podcast.

After competing at the Slam of the North in 2018, this February, Frank travelled to Birmingham to compete at ‘UniSlam’, the national university spoken word competition, for the University of Manchester team. Frank earned particular praise after performing his piece ‘The Makers of Our History’ at the semi-final of the competition, with poetry judge Dizraeli (Rowan Alexander Sawday) praising him as a “fantastic writer”. He has since competed in the poetry slam at the Huddersfield Literature Festival.

Frank is an artist who is very obviously committed to pushing his writing abilities with new challenges. In addition to having written poetry which bounces between multiple languages in poems such as ‘La Tierra Mala’, Frank has also written a uni-vocalic poem, a type of lipogrammatic-constrained writing which only uses a single vowel throughout, called ‘Odd Socks’.

Writing a piece that holds a coherent narrative and plenty of humour whilst having his hands tied to this extent is a real showcase of Frank’s writing talents, an idea that has audiences listening to every nook and cranny of the poem.

Crows roost
Dogs howl old songs of loss
Boy knows
Now, nobody to hold on to
Nobody to go down on
Odd socks rot on floor.

Boy knows not to throw socks on floor
Do not drop socks!
Socks do not go on floor!
Boy’s brow grows hot
Cold drops of shock
Odd socks own sprogs born on floor.

Frank is also the host of the spoken word event he organises, ‘Turn Up the Speaker’ at Antwerp Mansion, drawing in an eclectic array of Northern poetry talent and raw writing, the likes of which are not often seen at other events in the city centre. The last show, headlined by local spoken word poet Thick Richard, was held outdoors, with a large wood fire burning close by.

One of Frank’s most well-known poems is ‘The Broken Arms’, a fantastic narrative of a middle England pub scene, heaving with characters and their snapshot backgrounds. Pieced together in a rambling, rhyming, fast-paced prose, these two-line life glimpses paint a coherent and hilarious picture of the sort of people you might find in your old local at any given time. Recently, Frank has written a second part for the poem in a contrasting narrative style, from after the closure of the pub.

The Broken Arms
By Frank Radcliffe-Adams

The band are finishing their drinks, their amplifiers shriek
They start another of the songs that they play every week

There’s ‘Mustang (fucking) Sally,’ one called ‘Give a Dog a Bone’
And a fairly un-PC one written by the Rolling Stones

Who drank pints from his own tankard, kept in a shoulder bag
When he started singing everyone went for a fag

But one Tuesday five years ago he left the pub at ten
Leaving his set unfinished, and was never seen again

And only one person can know if he’s alive or dead,
A pale man in the corner who goes by the name of Ted

Who runs a fast food van that caters for you your every need
Burgers, hot dogs, hot and cold drinks, ketamine and speed, and says:
“Well … to be fair, mate, this stuff is less likely to kill you than these fucking burgers”

Tonight his chin rests on his palm, a glazed look in his eyes
He can’t block out the crowded room however hard he tries

Whilst Lynne, who played for West Ham ladies, watches him and thinks:
“The bastard never had a chance, it’s no wonder he drinks”

Ted’s yearning for his younger days, he’s getting old and slow
He tried it on with Lynne last week but she knows taekwondo

But their thoughts are interrupted by loud voices at the door
The drum and bass boys swagger in, Ted knows they want to score…

“It’s Johnny P the gypsy MC!
Lock up your daughters and your auntie!
Hold tight Fat Tim – the baddest selectah!
Man like us we ain’t here to protect ya!”

Meanwhile Colin walks in, clutching posters to his chest
His dogs been missing since last night, today has been a test

Sandra, Colin’s neighbour, hiccoughs, whisky on her breath –
Last night she jumped the fence and beat the dog to death

And Ted is in the toilets doing lines with the lads
It’s the best they’ve ever had.

The three emerge, sniffing, as the barman wipes his brow
Then rings the bell again, calling: “Right! Everyone out now!”

You hear voices carried on the wind sometimes
They echo in the alleys, and say strange things, like:

“What? This town has a drug problem?
Too right it does, there’s fuck all to be found
But you know me, I keep my ear to the ground
I can pick up bits and pieces here and there if I’m lucky
But I used to buy smack in the bookies!”

You may hear Ted say this to himself, as an eastern wind blows in from the marsh,
As he turns away to light his fag and plumes of smoke float over the creek

He’s been coming here a lot since the pub closed down,
A spit and sawdust shit-hole that they called ‘The Broken Arms’
Where the regulars drank every afternoon and evening
As if they were crafted there from clay, someone said
Ted forgets who

So, as business was going to shit he burnt down the fast-food van
He thought he’d get an insurance pay out
Turns out that it wasn’t insured

So now he sleeps in his boots on his sister’s settee
He drinks by himself at the quay side
He breaths in the stench of the creek at low-tide
And sometimes says to himself:

“I blame Maggie Thatcher… miserable old cow
I survived the eighties but I’m just existing now
I drank away my chances and I pissed them up the wall –
But, if could go back now, I’d change nothing at all”

Following his successful performance at Punk in Drublic’s 2nd birthday party, Frank is set to perform at the next Punk in Drublic poetry and comedy show in aid of Mustard Tree homeless charity, on Thursday 6th June 2019. 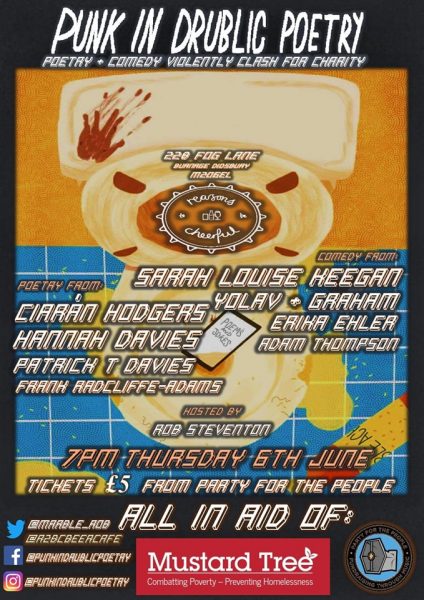 Frank will also be performing at the Art in Mancunia student-led exhibition of art, photography, poetry, and music, which will be hosted at Antwerp Mansion on Wednesday the 9th of May. The event will run from 6pm – 10pm and tickets will be sold on the door for a price of £2, with refreshments also provided.