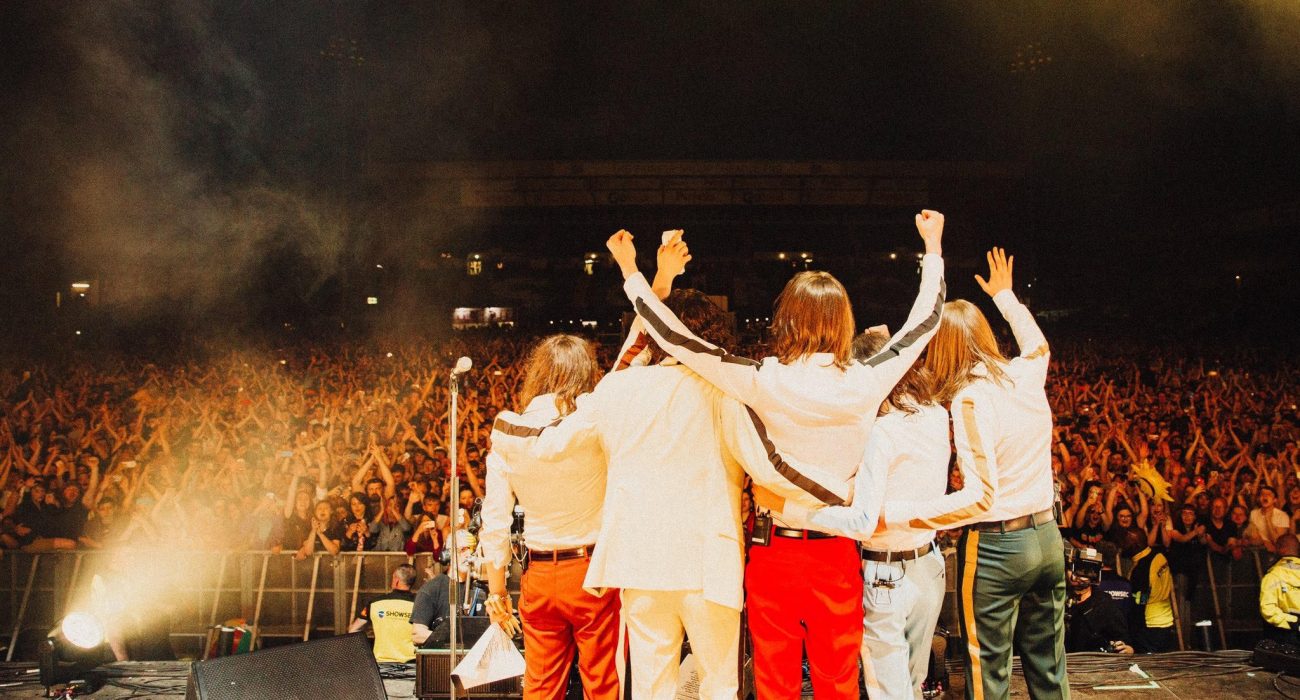 Returning to Stockport with a stomping line-up of some of the industry’s best alternative bands were the flashy and lustrous five-piece Blossoms. After spending the past few years touring relentlessly and writing new material, Blossoms invited the likes of Cabbage, The Blinders, and Fuzzy Sun to join them in the beating sun as fans gathered in their packed-out hometown football ground.

With one swift movement and the triggering of strobe lights along the back wall of the stage, the suited and booted Blossoms entered the stage with a distinctively proud Northern groove. Bespangled in a red trouser suit, embellished with a frilled white shirt, frontman Tom Ogden fitted his old soul persona perfectly as he greeted adoring fans. Stretching one arm out towards the sea of the lurching crowd, Ogden pulled it back abruptly as the gut-wrenching synthesised introduction of ‘At Most a Kiss’ resounded in every chest that had gathered.

Blossoms have reigned the indie scene over the past three years, incessantly bringing out material that both longstanding fans adore and middle-aged mums. However, I wonder if this momentum is beginning to be overstretched as the band released their latest single ‘Your Girlfriend’ a mere 24 hours before the gig. This is by far the band’s weakest track; it’s lacklustre and it doesn’t sit within the same ballpark as the band’s discography. I was hoping that a live performance of the track would make it make sense.

If anything, the band’s launch of the single live brought the energy of the stadium to a stand-still. Luckily, this was just an anomaly to the band and so when one of the band’s hits ‘Blown Rose’ followed shortly after, the crowd was yet again whipped into a frenzy as bumbag embossed and bucket hat lads lit their flares once again.

Refreshingly, Blossoms remained humble and connected with their audience throughout the entire performance which really did shine through as Ogden repeatedly remarked how thankful the lads were for everyone who turned out.

It’s no surprise that indie’s finest, Blossoms sold-out their hometown date but what was surprising was the band’s smooth transition into Bowie’s ‘Let’s Dance’ as Ogden swayed across the stage from right to left as the crowd mirrored his newfound burst of energy. With an extensive set-list that ensured coverage of classics, their latest album, and covers, Blossoms held their audience’s attention in the palm of their hands, effortlessly.

Of course, I’d always prefer to see the lads back in a smaller, more intimate space playing more of their EP material, however, it’s certainly compelling and inspiring to see the progress they’ve made. I’m confident whatever the creative direction the band chooses to pursue for their next album will continue to be setting the standard for upcoming indie acts.