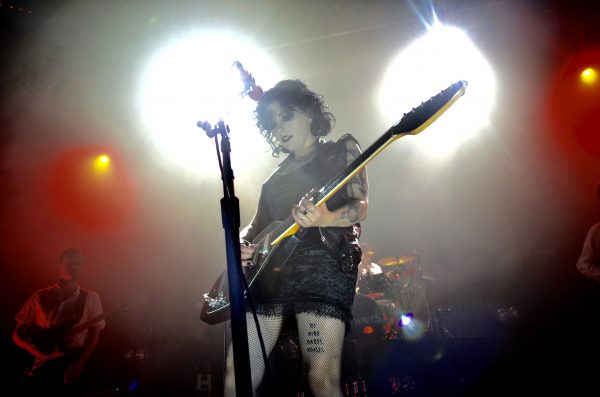 Manchester’s own Pale Waves made a return to their home city on Friday night to play a sold out gig at Academy 1, bringing with them their gothic charm and infectious indie hits. After taking the music industry by storm and becoming one of the UK’s most exciting up-and-coming bands, Pale Waves proved exactly why their popularity is so deserved by performing a stunning set to a sea of their fans and rainbow flags.

Opening up for Pale Waves were Sports Team, a six-piece band who provided the crowd with an exciting yet quirky set. Playing their biggest hits, such as ‘Margate’ and ‘Here It Comes Again’, frontman Alex Rice danced around the stage almost manically, posing for his audience. In contrast, the keyboardist seemed expressionless whilst he played his tambourine, donned in sunglasses and a football t-shirt, providing an almost comical presence onstage.

Pale Waves finally took the spotlight in front of their audience of over two-thousand, with every person in the room screaming and cheering as the lights went down in anticipation. Beginning with ‘Eighteen’, the crowd barrier was cloaked in an abundance of rainbow flags as the whole venue sang along to all the words.

‘Kiss’ came next and front-woman Heather Baron Gracie pulled her trademark move in every guitar solo, flipping her dark curls back and forth as she bounded around the stage. She truly knew how to work the stage, which was evident in track ‘Red’, as she took off her guitar and interacted with her audience by offering the mic to them. The visual effects of a Pale Waves gig are like no other, with a focus on red, black, and bright lighting to keep up with their gothic persona.

‘Television’ and ‘The Tide’ were next on the roster, before the band performed a brand new unreleased track titled ‘Tomorrow’. If the rest of the new album is as good as ‘Tomorrow’, then it will be as much as a hit as the first. Being from Manchester, Pale Waves spoke greatly about their experience of playing their first gig in the city to ‘a crowd of 30 people’. It was fantastic to see them having just as good a time as their audience. 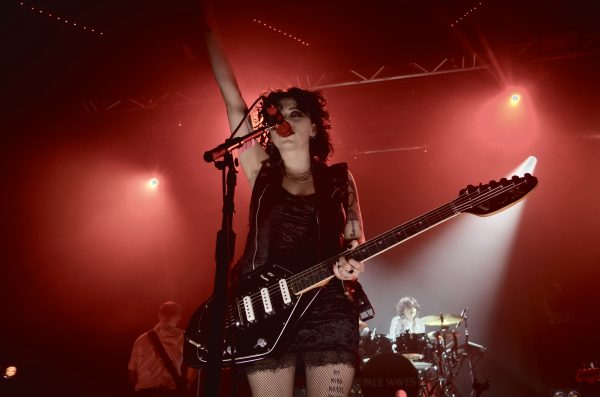 Next came a trio of slower, more emotional tracks with yet still amazing performances of ‘My Obsession’, ‘When Did I Lose It All’ and the rarely played ‘Drive’. This atmosphere was soon interrupted as Gracie yelled ‘It’s Friday night!’ and proceeded to play the ultimate bop that is ‘Came in Close,’ with its undeniably catchy chorus and beat.

Introducing ‘Black’ by explaining the meaning behind the track – “it’s about someone who hates me” – the energy brought to the stage by Pale Waves never ceased, even during the slower numbers. Another aspect that this band can be commended for is the unfaltering interaction between artist and audience, as the crowd were asked to help sing ‘One More Time’. 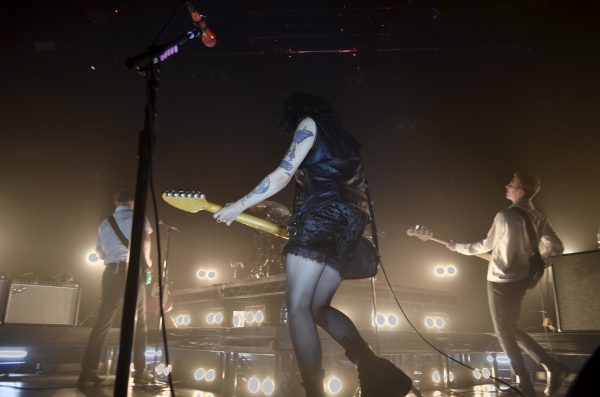 Commemorating the last night of their UK tour, Pale Waves treated Academy 1 to a stunning performance of ‘Karl (I Wonder What It’s Like to Die)’, and the pure emotion in Gracie’s voice could be felt by the entire venue. ‘Noises’ came next and the incredible atmosphere continued right to the very end, where the band finished on ‘There’s a Honey’. The entire room sang as one – “I would give you my body, but I’m not sure that you want me” – providing the crowd with a final opportunity to dance.

The set list as a whole was full of both songs from their debut record, My Mind Makes Noises, and also older tracks from early EP’s, with arguably only ‘New Year’s Eve’ and ‘Heavenly’ being the biggest hits missed off the set.

A genuinely amazing show, enhanced by the fantastic opening set by Sports Team. Pale Waves are truly getting bigger and better at every gig.