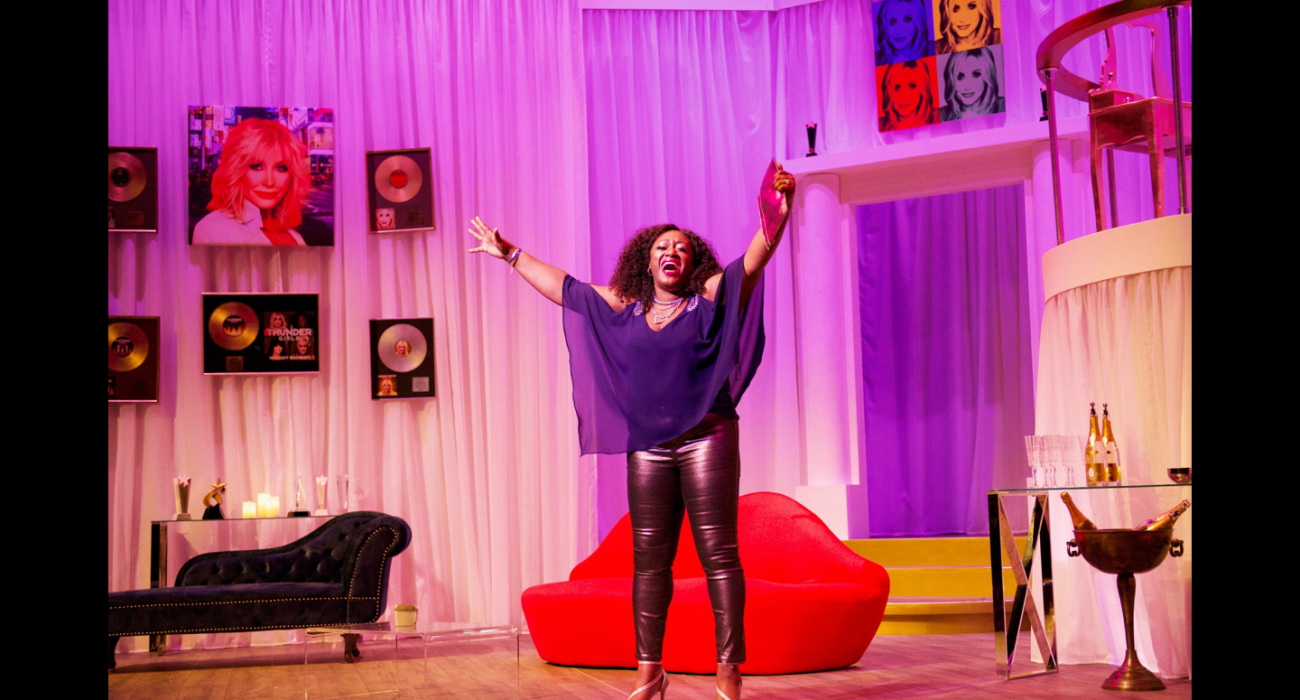 The Thunder Girls is a reunion-turned-intervention between four ex-bandmates. Reformation cards are on the table, but with what intentions after all this time?

The play is directed by Joyce Branagh (Kenneth Branagh’s sister) and is based on the best-selling novel of the same name, by author, and former music manager, Melanie Blake.

Blake was thrilled to return to Salford, the city where she was once homeless, to put on a play that was twenty years in the making.

Blake, who could not afford to see much theatre growing up, bought 100 tickets to her own show to give to people who could not to afford to attend. A free bar (drinks and food) was provided for press. Every audience-member was given a free copy of the book. Blake is as generous as she is talented!

The play’s stage-design (created by Richard Foxton) spoke for itself, setting the scene for the events to follow. We looked into the living-room of a ‘very boujee’ abode (think crystal chandelier and winding staircase). This room is later described as a “shrine” by one character. Adorned with huge recurring portraits of the same face and framed golden records, it’s evident this house belongs to an esteemed pop-star.

The levels of staging were used instinctively by Foxton. The three characters present in the first scene took their positions in a clever hierarchical format, with the most affluent standing at the top of the staircase. Nobody in the cast ever had me questioning their placement within a scene; all the props were necessary additions to aid the nature of the story.

Each actor played their part throughout. It was clear they had fantastic offstage relationships, which leant itself to their performances and chemistry.

Sandra Marvin (Emmerdale) opened the show as Carly, with a belter of a live song – others were pre-recorded. Her character transcended into the ideal best-friend: funny, charismatic, loyal and bold.

With dry, bitchy remarks timed effortlessly to perfection, Beverley Callard (Coronation Street) gave hilarious comedic quality to the sardonic Roxanne, whilst down-playing her tender moments. She won over the audience, who leant their ears – and let their hearts go out – to her throughout.

Carol Harrison (Eastenders) made her entrance as the diva-ish Chrissie by lip-syncing her way down the winding staircase, which was fitting, given her notorious use of miming. An appropriate pout-game was maintained throughout for this self-absorbed sass-queen. This was some seriously good bad acting by Harrison, who we loved to hate!

Coleen Nolan (Loose Women; the Nolans) made an unbelievably confident stage-debut as Anita, who makes her first appearance at the end of Act One. Charged full of energy and wit, the presence of her character was worth the suspense. Nolan told us she was worried about making her acting debut, perhaps afraid she’d mess up like her character did at Eurovision, but she was a natural.

Gary Webster (Eastenders) brilliantly voiced the band’s ex-manager, who communicated with them Charlie’s Angels-style. He made a brief appearance at the end of the show.

A soap-like quality had the audience hooked with each character being undeniably relatable and understated. Each joke was perfectly timed for audience reaction and participation – so much so, there were ad-lib moments that made this performance one-of-a-kind. A precious moment saw a derogatory comment made towards Steps, prompting Claire Richards – of said band – to gasp at full pelt in her seat. This moment had us all in stitches; it was positively priceless.

Amongst the main themes of the play was an acceptance of ageing, friendship and how fame changes individuals. Chrissy and Roxanne are too mean to one another for their relationship to have always been sour. Nasty remarks such as, “Did you have a lift on both your faces?”, make it apparent that they were once very close companions. As the plot unfolds, the audience becomes aware of why their friendship took this unfortunate turn.

While the characters often referred to the effects of ageing, they still expressed honest sympathy towards the new generation having to keep up with social media presence and the beauty standards of today. The observations made, such as autographs morphing into selfies and botox being offered at the hairdressers, brings to light discussions on contemporary issues and how changing times may not always entail changes for the better.

The diversity of the characters is something that stood out to us. Surprisingly, no one else had commented on the play’s incredible diversity, as Blake told us, herself:

Thanks so much this fabulous review – you are the first person to comment on the diversity – which I worked really hard to achieve in a natural way – every show should be diverse but I believe it should be so natural that it ‘just fits’ – I love that you loved #thethundergirls ❤️ https://t.co/ixYBVqJvqX

As the ending of the performance was nigh, I recognised I was feeling very humbled by the messages being portrayed through the history and relationships of these characters, leading me to re-think my own long-lost friendships, and whether a rekindling should be in order after all. In my eyes, if a piece of art is causing you to re-think, ask yourself questions and feel a certain way, then it’s doing its job correctly.

This play is at times (intentionally) cheesy, but there’s also no shortage of burger – it’s a real meaty play for you to dig into…

There are plans for The Thunder Girls to tour and head to the West End.