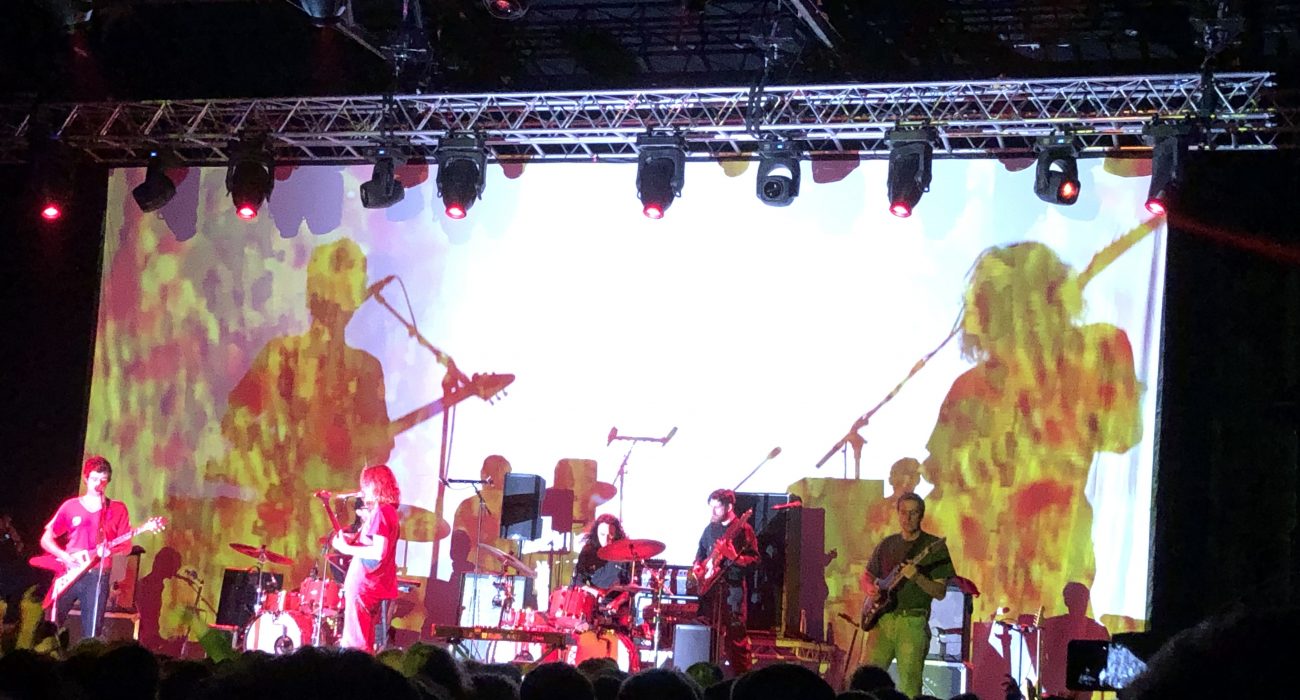 Having taken a well-earned rest from releasing anything in 2018, King Gizzard & The Lizard Wizard are back with two shiny new records to show the world.

It’s somewhat of a quieter year compared to the five albums fans were treated to in 2017. But, who knows, maybe less can be more? And, with a band infamous for their unique live shows, the true test of these albums comes on the road. As their world tour rolls on, a stop at Manchester’s O2 Victoria Warehouse seemed a perfect setting for an evening of psychedelic rock.

2019’s Infest The Rats Nest contains some of the bands most feral material to date, with an unexpected exploration into thrash metal. We’re a long way from the much softer psychedelia they were known for half a decade ago. This might be a bit much for some listeners, but you cannot deny the energy of these tracks live. King Gizzard held nothing back with opening song ‘Self-Immolate’ leading straight into ‘Perihelion’. Both drummers Michael Cavanagh and Eric Moore maintained an intense pace completely in sync, providing a strong backing for such intense tracks.

Fishing For Fishies, also released this year, feels much more like business as usual for the band. With roots clearly in classic psychedelic rock it’s an enjoyable listen, if a tad cliché. Ambrose Kenny-Smiths’ harmonica playing was a real treat on the live renditions. Feeling straight out of the seventies, I’d happily welcome this trope back into the modern day.

‘Plastic Boogie’ proved to be the strongest live offering from this album. The riffs stay true to the track’s “boogie” namesake, getting the crowd moving. Though this very much seems ironic when compared to the song’s lyrics, centred on the damage plastic causes to the environment. Although their point may be too on the nose with lines, “F*** all of that plastic” and “The way we wrap it is wrong”, they remain memorable. And, considering how often people ignore these issues, the message may need to be stated that obviously.

The thematically similar track, ‘Planet B’, was even more blatant. The theme is where the similarity ends, however. The four minutes of shredding and screaming sums up about how anxious I am about the current climate crisis. Again, simply put across, the lyric “There is no planet B” effectively conveys their point.

Leading into another track from Infest The Rats Nest: ‘Hell’ maintained that ferocity. At this point, the crowd were whipped up into a frenzy, the perfect time to deliver material from Nonagon Infinity. The 2016 noise rock album might even be their strongest, which is quite the title among fourteen records. The pairing of ‘Wah Wah’ flowing seamlessly into ‘Road Train’ certainly stood out as a highlight in the set.

Ten-minute track, ‘The River’, felt like an odd follow-on. One of four parts from Quarters, it had the feel of a psychedelic jam session. Even jazzy elements at times. Definitely not without merit, but a deflating end to the set. The previous four tracks built up so much energy to a climax that never arrived. Not even an encore. The feeling amongst the audience was just confusion… not the impression you want to leave. With scores of chanting for ‘Rattlesnake’, the band could have ended on a high by indulging their fans in any one of their classics.

An overall strong performance from King Gizzard, but at this point, more can be expected of them. Fundamentally, the show was flawed by older stronger material making way for their latest albums. Definitely not weak tracks, but not up to the scratch with the burst of creativity they had in 2017. However, King Gizzard & The Lizard Wizard simply do whatever the hell they want. This is the attitude that led to their variety of music and ultimately their success. They are always going to be a band worth seeing.