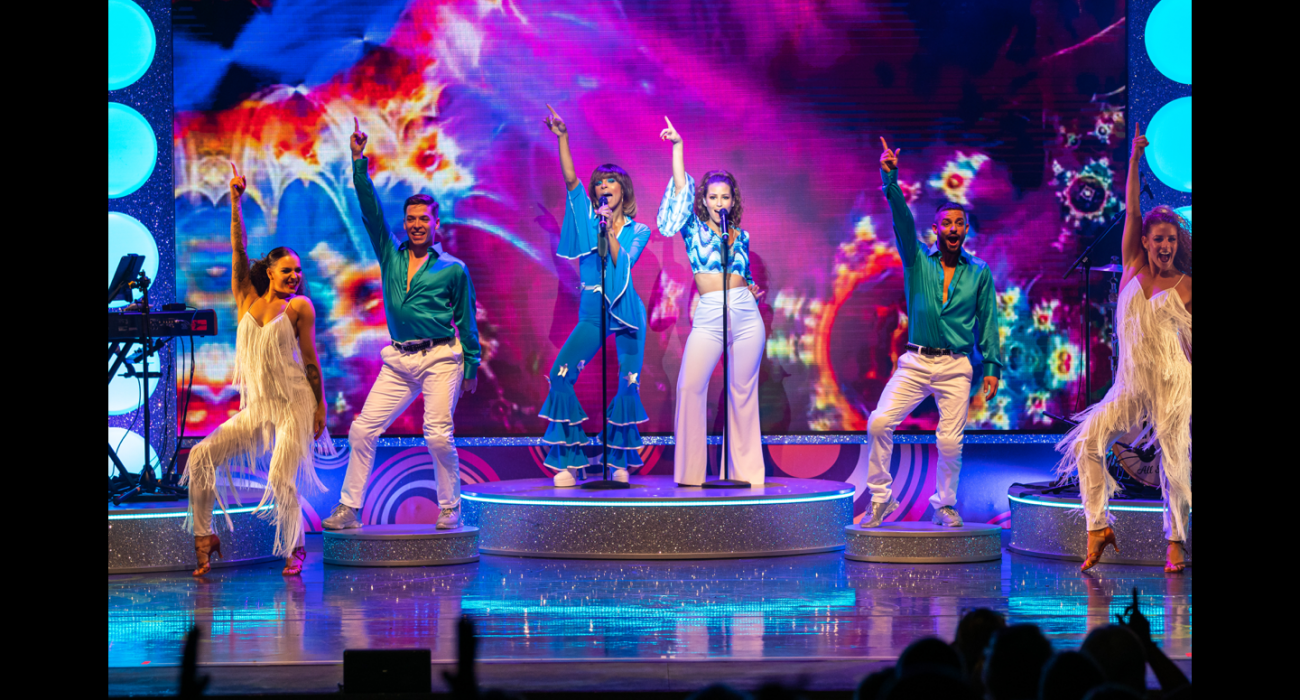 Rip it Up the 70s is the third edition to the Rip it Up theatre series, following the previous 50s and 60s versions.

There are other similarly themed shows, but what sets Rip it Up apart is its all-star cast, which, judging by the scores of people who went to the stage door after the show, is one of the reasons so many people choose to watch it over other jukebox song and dance shows.

Whilst the 50s starred The Wanted’s Jay McGuiness, Strictly Come Dancing’s Natalie Lowe and Olympic gymnast Louis Smith CBE, and the 60s starred McFly’s Harry Judd, JLS’s Aston Merrygold, and, once again, McGuiness and Smith, it is the 70s which has the best cast.

Louis Smith has become synonymous with Rip it Up, starring in all three iterations, and after seeing him on stage, I hope he returns for the next one (if there is one). He might have retired from artistic gymnastics, but he puts his gymnastic skills, as well as the moves he learned on Strictly Come Dancing, to great use in this show.

Melody Thornton from the Pussycat Dolls was unsurprisingly superb. She oozed sex appeal and sass. Thornton was hired to join the dance-troupe The Pussycat Dolls as a singer, alongside Nicole Scherzinger, though she never got to sing more than a few verses. She then went on to showcase her talent on Pop Star to Opera Star, so I was aware she had the chops, but her performance in Rip it Up had me questioning why she didn’t get to sing more in the Pussycat Dolls. She was also a great dancer and, in general, entertaining to watch.

Rachel Stevens from S Club 7 gave some great performances. Like Smith, she is also a Strcitly alum, so she was unsurprisingly a good dancer.

Blue’s Lee Ryan, unfortunately, had to drop out of the show, allowing The X Factor‘s Giovanni Spano a place on the poster, and he really did deserve it! The audience fell in love with his amazing vocal chops and excellent stage presence.

The artists sang classic hits from the 70s, ranging from Blondie to ABBA. The ABBA tribute was definitely a highlight, especially with there being two male and two female headliners, allowing them to impersonate the iconic band. I liked that they included Andrea True Connections’s More, More, More, given Stevens covered it three decades later.

I did find the all-stars addressing the audience a little awkward; you could tell that none of them were actors or presenters. I also was not massively keen on the constant video clips of the American man discussing different genres in the 70s before each section, e.g. disco. I personally think the clips were too frequent and too long; they also killed the mood a little after such vibrant dance numbers.

There could be a more interesting way to give audiences information. Though, in all honesty, it wasn’t really needed at all; the singers and dancers did a brilliant job of communicating messages to the audience. The audience did seem to like the clips of 70s adverts, though – everybody loves a little nostalgia.

Whilst Rip it Up is low-brow and flawed, it isn’t trying to be a musical masterpiece. It’s sickly sweet and crazy cheesy, which is exactly what I was expecting, and hoping, it would be. It was a trip down memory lane for those old enough to remember the 70s, and it had me, a ’99 kid, feeling a little nostalgic for a time I never even knew. It was a fun, camp evening, and I can’t wait to rip it up the 80s and 90s!