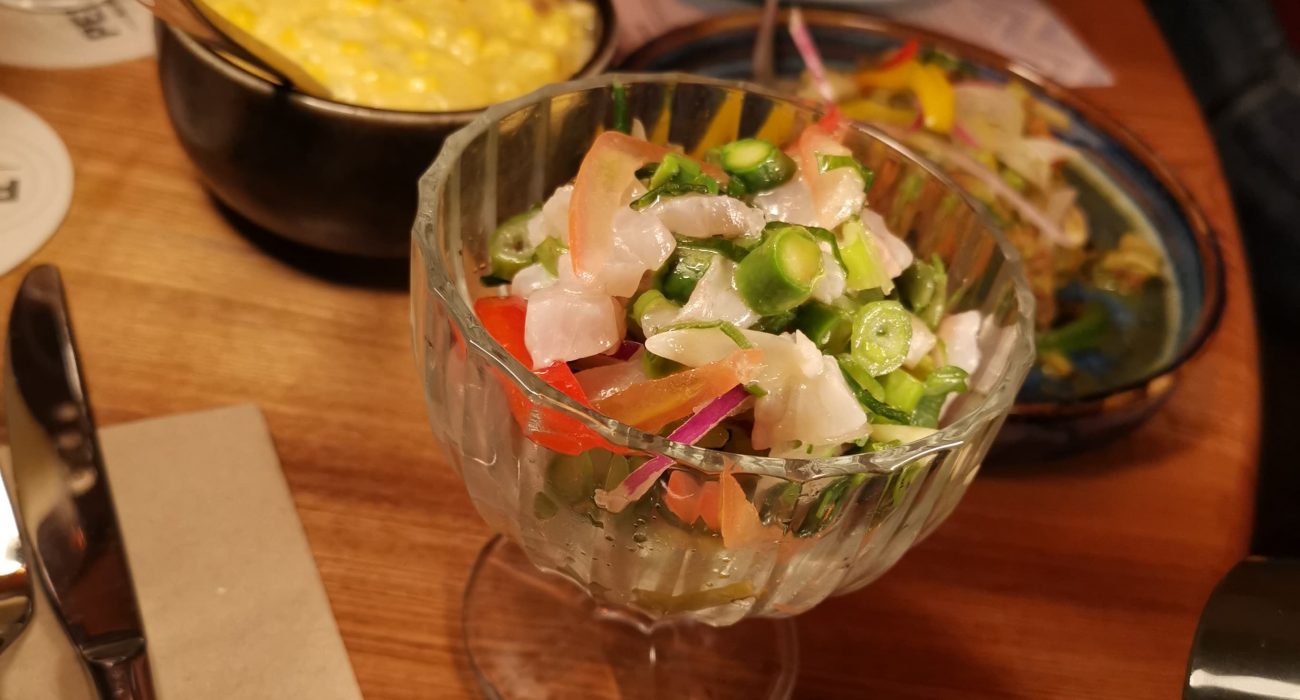 Peru Perdu Review: What is Tiger Milk and Why You Need It

Two issues ago, we hyped up the opening of the Cotton Factory’s newest 6-month venture Peru Perdu. This week, we got the chance to try their Peruvian offerings for ourselves.

Aesthetically, the restaurant bridges trendiness and cosiness in equal parts. The trendiness is displayed with YES-terrace-style hanging foliage, whilst the cosiness is evoked through a plethora of warm-lit candles. Although obviously South American in theme, this is only subtly enforced, which helps maintain the high-end restaurant atmosphere.

The floor caters for around 80 covers, with each guest greeted by exceptionally cheery staff.  Despite it being only their third week of service, the staff were incredibly knowledgeable about the dishes. This was extremely important as, unlike many other cuisines in Manchester such as Italian or Japanese, Peruvian is largely unknown to the customer and so requires guidance.

My friend and I asked for a cocktail recommendation and were brought two of the staff favourites. The first was a reinvention of Peru’s most famous cocktail, the Pisco Sours. The humble Pisco Sour is a short cocktail made with Pisco (a colourless spirit similar to brandy), lime, egg whites and sugar syrup. I tried the ‘Deepest Darkest Sour’, which was a Pisco sour tempered with marmalade and orange to provide an interesting bitterness to the already sweet and sour cocktail. Very moreish.

My friend had the ‘Clarified Cuba Libre’. The staff were very excited to talk me through this rendition of a classic Cuba Libre (or rum and coke). In clarifying the coke, this Cuba Libre is entirely clear like Sprite, but still tastes strongly of cola and rum. An interesting gimmick and play on the senses, serving them in their own little bespoke alpaca-adorned bottles. Cute touch.

One great provision of Peru Perdu’s was their extensive selection of Malbec! As a Malbec lover, I tried a Mendoza region Malbec which was deliciously full bodied and even slightly smokey with wood edging. If you yourself aren’t keen on red wine, maybe try a Malbec – it’s a good introduction to fuller bodied reds without having to pay extortionate prices. 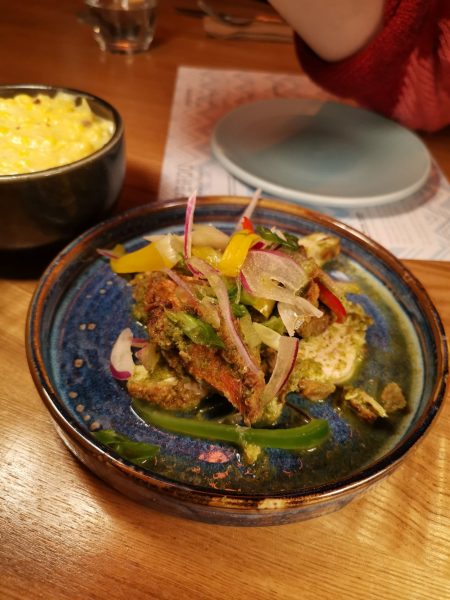 Next, the food. I was intrigued by the menu, I wanted to try every single ceviche, but eventually settled on the seabass. Cured with lime, the seabass was served with samphire, asparagus and tomato. Light, zingy, fresh and beautifully presented, this ceviche was everything I could have wished for. However, the dish I was the most excited for was the ‘Tiger Milk Fried Chicken’.

Tiger milk, as described in the last article, is a staple of Peruvian flavour; the liquid that forms from ceviche curing (fish stock and lime) was used to slick fresh fried chicken. The chicken was delicious although I think the breading needed to be crispier to prevent it from getting too soggy from the tiger milk coating.

My friend is a vegetarian and, as one of the co-owners explained to me, plant based food provisions are something that is very important to the Peru Perdu team. Their menu is sectioned into ceviche/raw, small plates, steak, larger plates and plant based.

To have an entire section devoted to vegetarians and vegans was great to see, as the common notion of veggie food as an afterthought was long gone. My friend tried the ‘humita’, which was possibly one of the naughtiest, most comforting dishes ever to pass my lips: fresh sweetcorn softened and reduced down with butter and cheese. I likened this to a Chinese chicken and sweetcorn soup-flavoured concoction.

My friend also had her own veggie ceviche which was a beetroot and green apple dish that was both zingy, fresh and palate-cleansing. Next to try was the ‘Pastel de Papas’, a deep-fried filo pastry of mashed potato which was crisp and satisfying. It could, however, have been slightly more seasoned to avoid the flavours getting a bit boring.

My friend then got the ‘Sweet Yam and Coconut Curry’. This for me was too sweet and I feel it could have been bettered by the addition of a little more salt or some acid from lime to temper the sweetness. I tried the £18 ‘Char grilled Red Prawns‘ (expensive I know). They were absolutely massive, cooked on a charcoal grill and were served with charred lemon (delicious). The prawns were charred and delicious but needed some more salt to bring out their flavour. 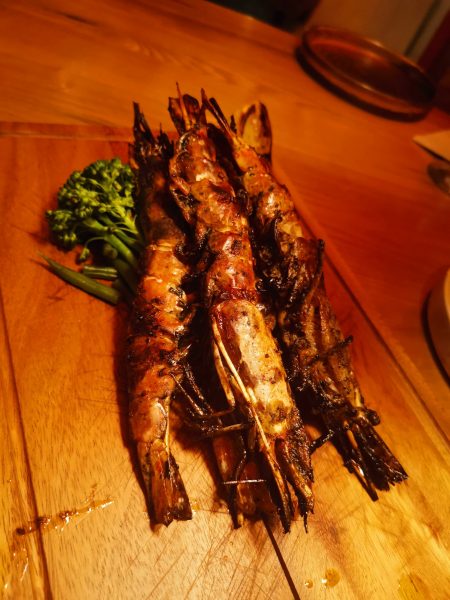 For dessert, we tried the ‘alfajores’, a traditional Latin American sweet consisting of homemade shortbread sandwiched with different fillings. The three on offer were salted chocolate, lavender and white chocolate and dulce de leche. Very sweet, but the perfect finish to any meal after so many fresh, healthy flavours. 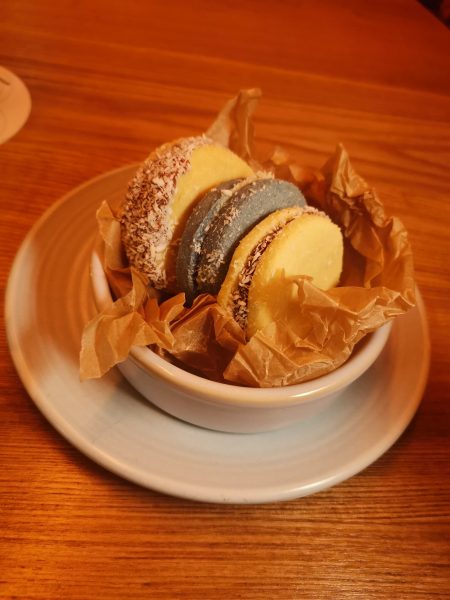 Overall, I would definitely go back to Peru Perdu to get more ceviche before it disappears to the next business venture! The staff are amazing, the decor is beautiful and the small plates are expertly crafted.

My one gripe would be a general lacking of seasoning, but they provide great quality sea salt so this is easily fixed. It’s definitely for a special occasion as the food is very expensive but honestly, when dealing with very fresh seafood – I would rather pay more than risk being served fish that isn’t anything but the most fresh.

A fabulous cocktail menu and wine list pairs the food beautifully with drinks, while the dessert menu is unique and different (roasted pineapple or dulce de leche cheesecake, for example). See the menu for yourself online and head down to try it before it disappears!