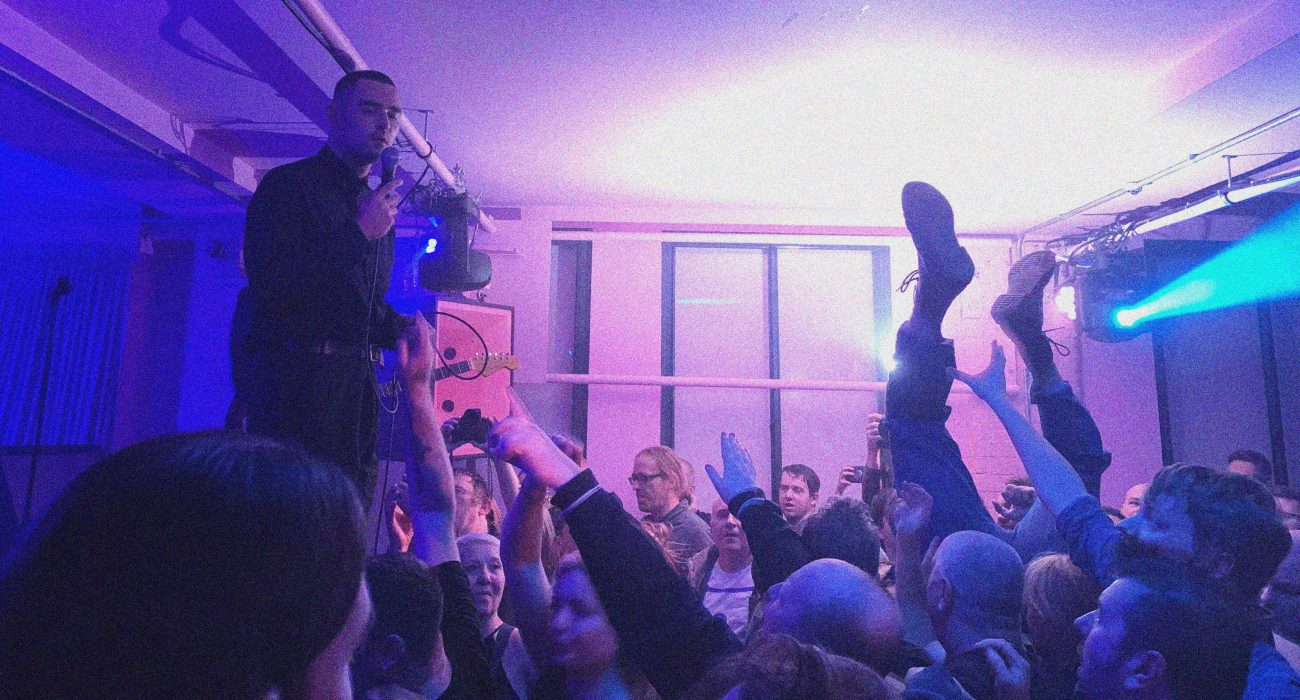 Following spots supporting IDLES this past Spring and the release of their hotly anticipated debut record When I Have Fears, The Murder Capital stopped off at the Pink Room in Manchester’s own YES to end their completely sold out headline UK tour in what is perhaps their last gig of this scale for a long while.

In support of the Irish quintet were Happy Couple, a London-based, female-led trio who unleashed a barrage of cold, brooding, industrial noise upon a constantly enlarging crowd, magnetised to the surprising tight playing of the band (the drummer in particular showed impeccable skill in his craft). Essentially the aural equivalent of being curb stomped, the selection of songs played were somewhat one-note, but this seemed like a conscious decision as opposed to a lack of creative variation. For a band with only one song available to stream, they left a massive mark on the audience, with many praising the members as they ferried their equipment back out of the room during the intermission.

Considering the choice of venue was perhaps the most garish and cartoon-like in Manchester, it was remarkable that the two bands fit in so well, with their combined caustic energy overpowering the overwhelming pinkness of it all.

The Murder Capital came out after the song ‘Dear James’ played, from another Irish band Burnt Out, whose lead singer recently passed away, catalysing the creation of some of the more sombre moments from When I Have Fears. Emerging amidst a wall of deafening guitar feedback, the band quickly took to the stage and began with ‘Slowdance’, a long, winding track that was played calmly and confidently by the boys, saving their energy for some of the more raucous moments to come.

Continuing the apparent pattern of quietest songs first, ‘On Twisted Ground’ followed, prefaced by a dedication from lead singer James McGovern to “those who can’t be here tonight”. It was a surprisingly emotionally involved performance considering how early it was in the setlist, and yet didn’t seem out of place at all. Despite spanning over six minutes the audience remained as invested as ever, cheering as the song came to a close after McGovern’s surprisingly melodic vocal performance (melodic given the preexisting stereotypes of a band of their ilk).

‘Love, Love, Love’ and ‘Green and Blue’ were the last of the slower songs, both showing the band’s musical prowess, once again highlighting the drummer, this time Diarmuid Brennan, and allowed for the first demonstration of the investment the crowd had in the show as they sang along passionately to the choruses of both songs, roaring with applause in the final moments of ‘Green and Blue’.

McGovern then disappeared briefly into the caverns backstage and returned just in time for the next song, lighting a cigarette as he came back to cheers from the crowd, as if for some reason they thought he’d decided to just give up for the rest of the gig. In between songs, McGovern briefly made a speech introducing himself to Manchester and asked what the craic was, which was met to a subdued response from the crowd.

Upon returning to the stage, James started what can only be described as a rally, shouting that “this is for everything”, which was then followed by the militaristic drumming of ‘For Everything’, the beginning of the louder portion of the setlist. The crowd began to mobilise, slowly changing from vocal engagement to physical, with some of them starting to form the beginnings of a mosh pit. Noticing the increasingly invigorated crowd, McGovern again asked the crowd what the craic is, to a much louder cheer than when he had asked previously, before launching into their final trinity of songs.

Based on the crowd’s reaction to the last minutes of the band’s set, you would’ve thought that they had invented punk music. From the first moments of ‘Don’t Cling to Life’, the entire front portion of the audience were jumping around, chanting along in celebration. It was by this point that you could tell the band had perfected their live show, as James balanced the line between arrogance and confidence reciting his tales of poetic angst, whilst bassist Gabriel and guitarist Cathal both became more confident and brash with their playing, swinging and gestating as if their lives depended on it.

‘More is Less’ received the most positive reception from what was a typical post-punk crowd, and not a single person in the room remained still as the throbbing bass shook the room. The boys finished with their first single, ‘Feeling Fades’, with culminated with McGovern and members of support act Happy Couple crowd surfing until the band finished playing.

As they left the room, ending with a bow, there was a palpable sense of wonder from those in attendance, that they had witnessed something important, even in spite of what was, honestly, a fairly short set.