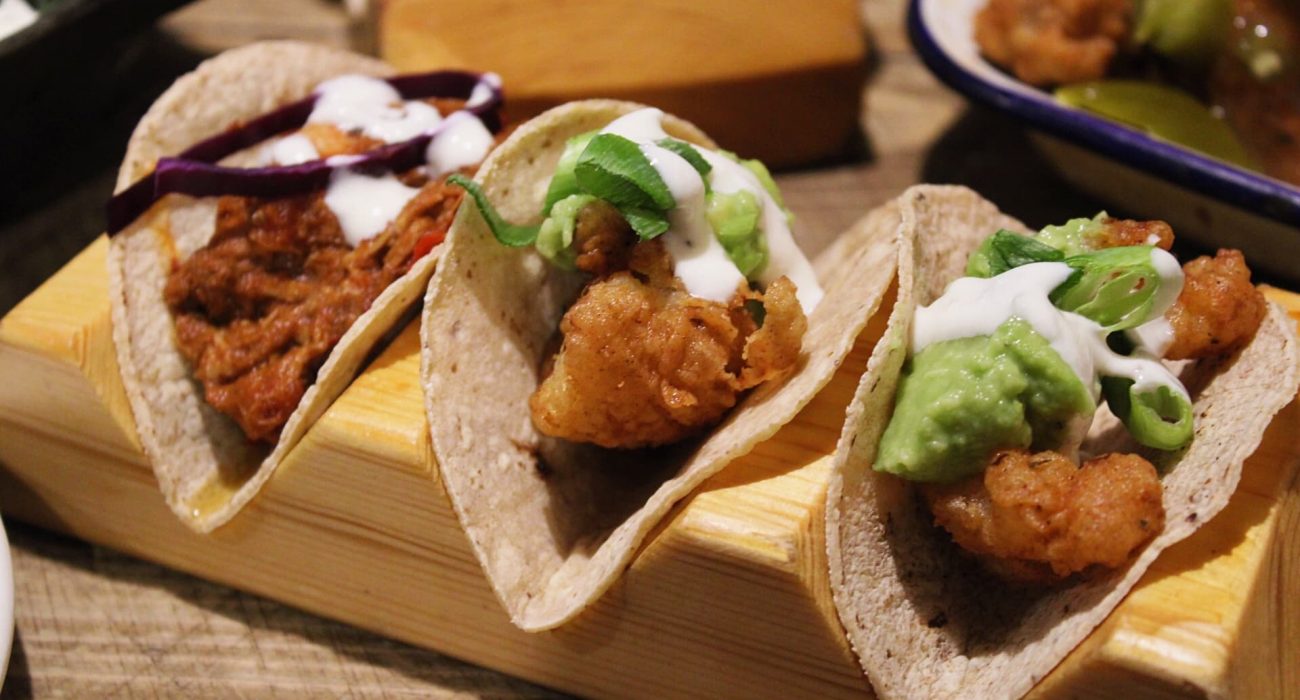 There are many places in Manchester to get Mexican food. From cheap and cheerful classics to more sophisticated renditions; this city has it all. This week, Food Editor Elena Bradley and Writer Anneliese Murray have worked together to give you a rundown of three of our favourites: El Capo, Luck, Lust, Liquor & Burn, and Wahaca.

There’s a reason that El Capo is the restaurant I visit most in Manchester. It has a great vibe without compromising on anything else. The space is dark and gothic – think red LED signs and Dia de Los Muertos candy skulls. Cool and a bit different, this is a good warm up to a night out, thanks in part to the extensive cocktail menu. The cocktails are excellent, from classic margaritas to bespoke creations like ‘Skull F*ck,’ a mix of Don Julio, guava, pineapple, lemon and agave all served in a porcelain day of the dead skull. Big brownie points also go to El Capo for offering Micheladas; beer with lime, salt and hot sauce – insanely good.

Of course, what makes any good restaurant is the food and service, and El Capo consistently delivers on both. Going down the route of small plates always goes well, a little like Mexican tapas.

Their highlights for me are the jalapeño poppers, the tacos – especially the steak and blue cheese, because duh – and the nachos. A small portion of nachos is still a very generous serving, enough to go between two as a side. I’ve tried them with the chilli beef topping, but I’d actually recommend the pulled jackfruit more. This brings me onto another positive: El Capo has a separate substantial vegan menu.

A final reason I am an El Capo regular (and you should be too) is the generous offers they put on, both year-round and seasonally. Tacos Tuesday (£1 tacos from 4pm) is a good place to start. Wing Wednesdays offer 50p wings from 4pm and Vegan Thursdays offer three vegan tapas, one vegan burrito, three vegan tacos and a bottle of wine for £16 a head.

I also sampled their Valentines menu in February, and was once again pleasantly surprised by the value for money; £20 a head for a steak dinner, chocolate fondue dessert and wine. El Capo is my staple, my trusty favourite, the one that never lets me down. Now give it a try and thank me later.

A sister branch of the popular Almost Famous, Luck, Lust, Liquor & Burn (LLLB) is Mexican food gone BIG. This is one for when you fancy switching it up and are stuck choosing between rich Mexican flavours and greasy American carbs.

It’s Mexican inspired, but way less conventional, which is to be expected with this boundary-pushing brand’s track record. Maybe you’re feeling a dirty burger, but with that extra Mexican kick to it. Or you’re sticking with the classic burrito but edging away from the typical fillings – think tater tots, crispy beef, halloumi and chorizo.

It doesn’t stop with mains; the nacho offerings are similarly out there, with bacon double cheeseburger nachos bound to turn heads. I must also express my appreciation for the Korean BBQ cauli-wings with a blue cheese dip. I’m not sure how they earned their place on this Mexican-American menu mishmash, but they really were a delight.

Once again, LLLB isn’t shy of a bargain, offering up a rivalry to El Capo with their matching £1 Taco Tuesdays deal. Or, if you’re feeling naughty head down on a weekday for the Killer Happy Hour (5-8pm) for £5 margaritas. On the topic of cocktails, LLLB have some pretty exciting takes on Margaritas; ‘Cherry and Hibiscus’, ‘Watermelon and Mint’ and ‘Pineapple and Jalapeño’ to name a few.

The only question is, which one will you choose? The trusty, reliable favourite, or the chaotic yet harmonious collision of two worlds? Regardless, Manchester’s Mexican scene has a little something for everyone.

You can’t live to the fullest on an empty stomach

The lovely folk at @ethical_consumer_magazine just ranked us as their most ethical high street restaurant group after looking at everything from ingredient sourcing to how we treat our teams. Safe to say, we’re smiling from ear to ear.

Finally, we come to the most commercial of our three Mexican’s: Wahaca. Unlike the other two, Wahaca doesn’t have the charm of being independent, it’s a massive chain company and with this, there are pros and cons. The personality of the restaurant feels less genuine, although the decor and layout are open, fresh and stylish.

The business-baby of Masterchef-winner, Thomasina Miers, Wahaca has been on the restaurant scene for just over 12 years now. The menu is minimalist and based on fresh and authentic Mexican flavours, with a 50/50 balance of meat and veggie options. In my opinion, their two best tacos are the orange-braised pork pibil with pink pickled onions and the plantain taco with hibiscus and crumbled feta. Delicious!

Wahaca is the most upmarket of the three, offering a full sit-down experience with a more formal (although still relatively relaxed) style of service than the other two. They also offer three set menus at different price points, allowing you to try some dishes you wouldn’t ordinarily order. For example, their classic menu is £15 a head, with six dishes between two.

Wahaca presents less of a naughty cheat meal and more of a conscious, fresh Mexican meal. The advantage of it being a chain means the food is more consistent over time, which is something I’d say that El Capo specifically tends to lose out on.

💀💐🌮Join us at our restaurants all this week as we celebrate Day of the Dead with a menu featuring delicious dishes and £5 margaritas. Find out more via link in bio #dayofthedead