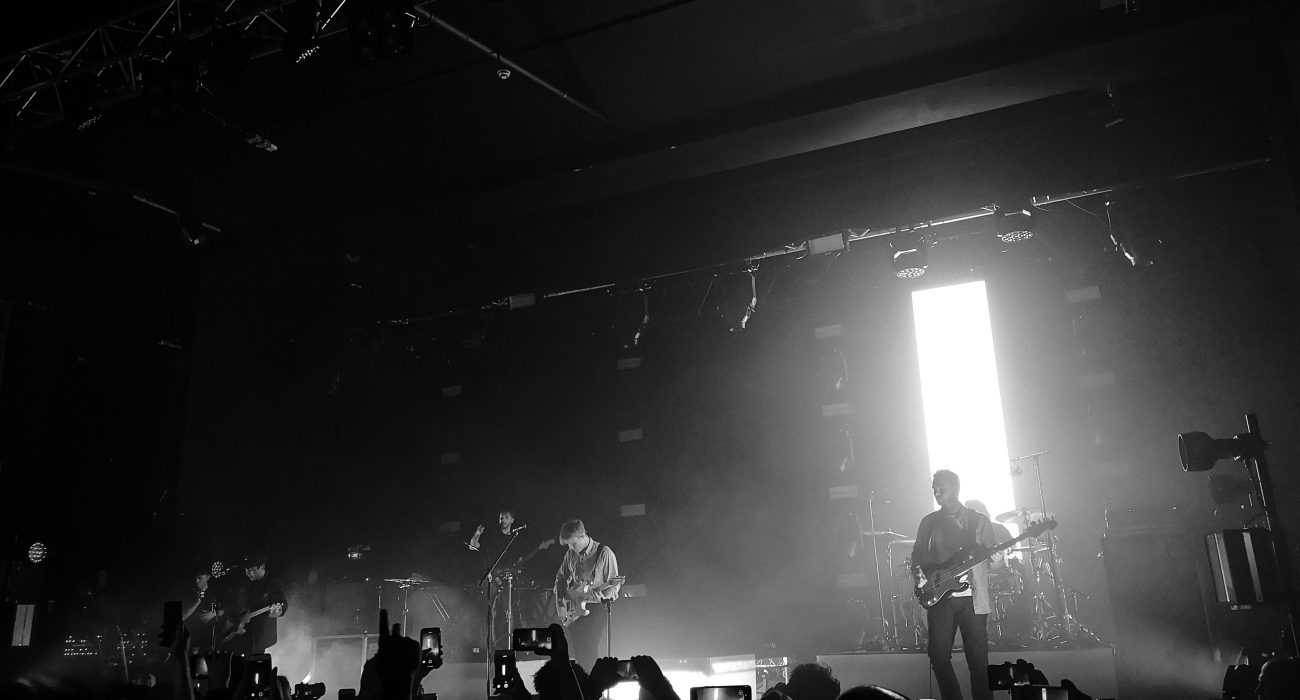 Before Sam Fender had even taken to the stage there was an overwhelming expectation from the crowd.

His debut album Hypersonic Missiles was released to extraordinary critical acclaim and peaked at the top of the UK Album charts. The response to his tour announcement was undeniably huge. The hype was real, but could Sam Fender put on a show to live up to expectations?

The familiar drum intro to ‘Will We Talk’ kicked off proceedings to raucous applause and the mixed crowd, ranging from teens to grandparents, were going wild. The crowd were singing their heart out from the start and Fender instantly thrived off of the noise the crowd generated.

In an unusual twist, he followed with three songs not on the album. The first was ‘Millennial’, then ‘Start Again’, followed by ‘Greasy Spoon’, where the amazing cartoon visuals on stage began. This gig perfectly demonstrated how to strongly, yet subtly, immerse a crowd. This show used the screens to great effect, which included cartoon Trump monsters (an angry looking US President with tentacles) and a whole host of psychedelic images befitting to the themes of each song. The energy in the room had now reached stratospheric heights. 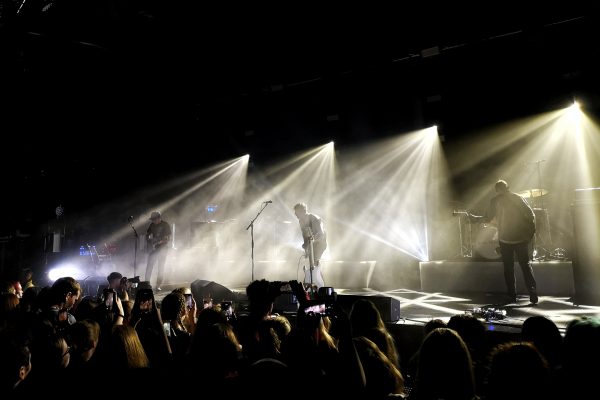 Sam treated the crowd with a completely new song that was written for the album, yet was cut at the last minute. After hearing ‘Do You Burn’ (an assumed title of the new track) in its first ever live performance, I am extremely excited to finally hear it as a studio recording. “The song has been recorded and is likely to be released within the next couple of weeks”, Fender exclaimed as the crowd now had something else to look forward to soon.

Sam’s humility and love for his music could not be demonstrated any better than during ‘The Borders.’ “I wrote this song with my best mates and it’s the one song I’ve written that is the closest thing to making me truly happy.” He wrote the song with lifelong friends Dean ‘Deano’ Thompson (guitar) and Johnny ‘Blue Hat’ Davis (saxophone) who form one half of his touring band. The chemistry that those lads have on stage is awe inspiring.  You can tell that this boy has a passion for what he does, has an incredible love of music and is a born performer. I don’t think I’ve ever seen someone look so happy to be on stage performing.

‘Dead boys’ is an extremely emotional song based on themes of male suicide and encouraging men to open up about mental health. It was performed to perfection. I cannot stress how clean the whole show was. There was not a single mistake, no missed chords, no flat notes and not a single technical glitch. Flawless performances are very rare and yet on the first gig of the tour, Fender pulled this out of the bag.

A sea of people on shoulders greeted ‘Hypersonic Missiles.’ Sam clearly was struggling to contain his emotions during this song and halfway through the final chorus he had to take a step back to take everything in. You could see how much he was affected by 3000 people all singing, dancing and losing themselves in his music. I don’t think any regular human being could be immune to that. I could never in my life see themes of nuclear annihilation and war be such a perfect sing along. Somehow, it just works. I can’t explain it. It just does.

The band left the stage and Fender returned with just his guitar. “Dark grey vistas of this weathered place” began the emotional lyrics to ‘Leave Fast.’ A song about unemployment, poverty and a “community ignored for generations.” I suddenly found myself, alongside many in the crowd, with tears streaming down my face. It was a beautiful moment to reflect. With its stunning guitar solo ending, the song is an example of a certain kind of perfection that really affects an audience. It was impeccable.

I am completely astounded that the crowd and Sam had enough energy to get through ‘That Sound’. “I’m probably going to get sued for this song because it’s a massive rip off of every indie hit ever”, preceded the overdriven heavyweight of the album. The crowd weren’t going to give in yet, not in the slightest. Mosh pits were plentiful and even though the whole crowd were physically exhausted, the nonstop jumping did not cease.

Ending the night with a cover of Bruce Springsteen’s ‘Dancing in the Dark’ was inspired. It was a colossal middle finger to his critics, many of whom suggest he is just a copycat of the rock icon.

If any bands are out there wanting an example of how to put on a show, look no further. This gig was special in so many ways. I cried, laughed, jumped and sang without fail, alongside 3000 other people who were carried on the same emotional roller-coaster. 10 out of 10 doesn’t do this gig the justice it deserves.