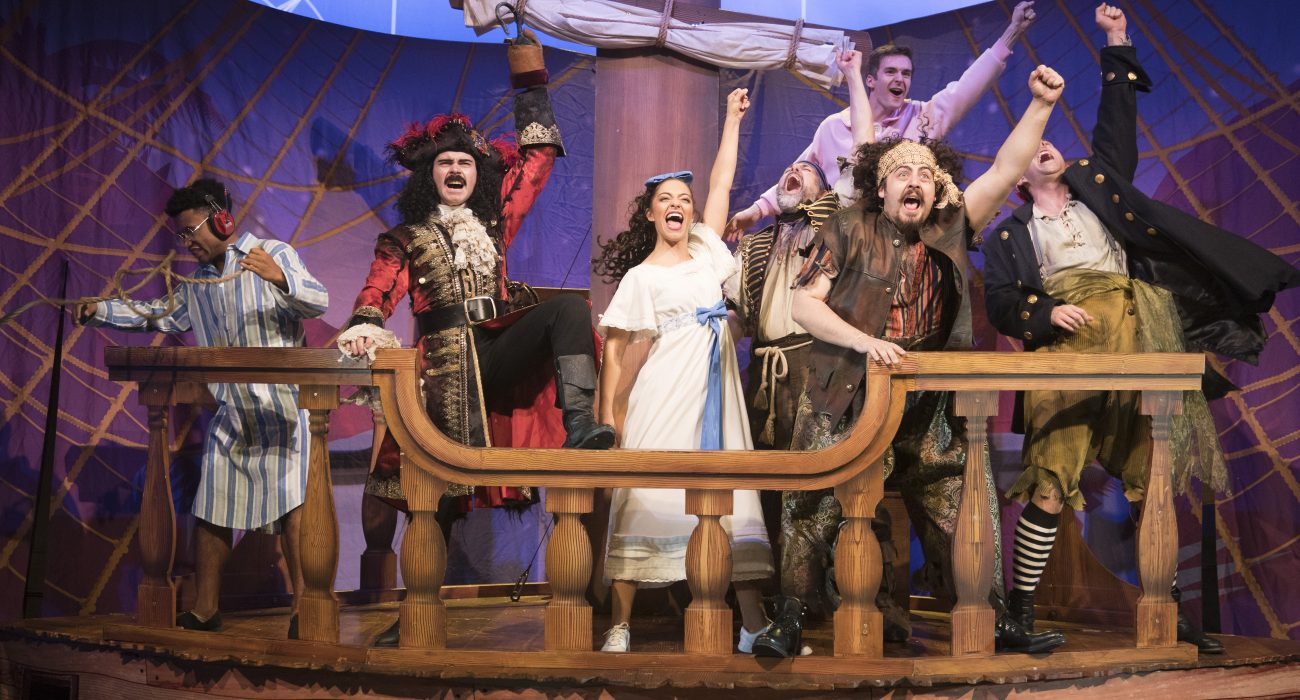 From the moment the audience step into the theatre, the production is already underway. Lights are flickering on and off onstage, troubling sounds can be heard from backstage, and a number of technicians are running up and down the rows of seats in a frenzy. The atmosphere was perfectly created from the start, and when the lights eventually dimmed (after some false starts), it felt like the play had already begun.

Although the play relied on the humour of things going wrong, at no point did the associated jokes become predictable or overused. In fact, some of the funniest moments came when the audience were expecting something to go wrong in a certain way. This anticipation and build up are what often made the punchline hit. One area where this was exemplified brilliantly was through the character of Dennis (Romayne Andrews). Dennis appears onstage as John Darling wearing a very conspicuous headset; it is explained that he doesn’t know his lines and is being fed them in real time. Every time Andrews opened his mouth to speak, the audience would wait with barely contained grins to hear the robotic, emotionless delivery of the line.

The brilliance of the play lies within the fact that the characters have a dual identity. They are characters in Peter Pan but they are also the actors who are playing those characters. The drama happens inside and outside of the performance as Sandra (Katy Daghorn) and Jonathan (Ciaran Kellgren), who play Wendy and Peter Pan, respectively, become part of a love triangle with Annie (Phoebe Ellabani), who plays Tinkerbell. These relationships, whilst unclear at first, unfurl as the production goes on, making it all the more entertaining as the relationships between characters is revealed.

Max, played by Tom Babbage, soon became an audience favourite, after eliciting sympathy for being ridiculed by other cast members. Max appears throughout most of the performance as Michael Darling, but also plays a Mermaid and the crocodile that taunts Captain Hook. Babbage was fantastic in this role, capturing the overenthusiastic and eager nature of Max in all three of his Peter Pan characters.

The banter between Robert (Oliver Senton) and Chris (Connor Crawford) as director and assistant director was some of the best dialogue of the play. Appearing onstage before the play started and ‘stalling’ after the interval to buy them more time to set up, the back-and-forth interactions between them made for hilarious viewing.

The integration of technicians into the performance made it stand out, especially when sound-technician Trevor (Ethan Moorhouse) was drafted in to replace an unconscious Peter Pan during the second act. The technicians also regularly ran onstage to fix a problem with the set. Without this element, the performance wouldn’t have been half as convincing or half as funny.

The highlight of the production was the ending scene, where the revolving stage ‘malfunctioned’ and kept turning through the different sets. This led to a chase scene where the characters moved through different settings that were wildly inappropriate for what was supposed to be happening. Peter Pan and Captain Hook duelling in the Darling children’s bedroom was a particularly absurd moment, with a lot of laughter coming from the audience.

With regular breaks in the fourth wall and perfect comedic timing, Peter Pan Goes Wrong is a show for all ages, guaranteed to make even the most stony-faced audience member crack a smile or two.