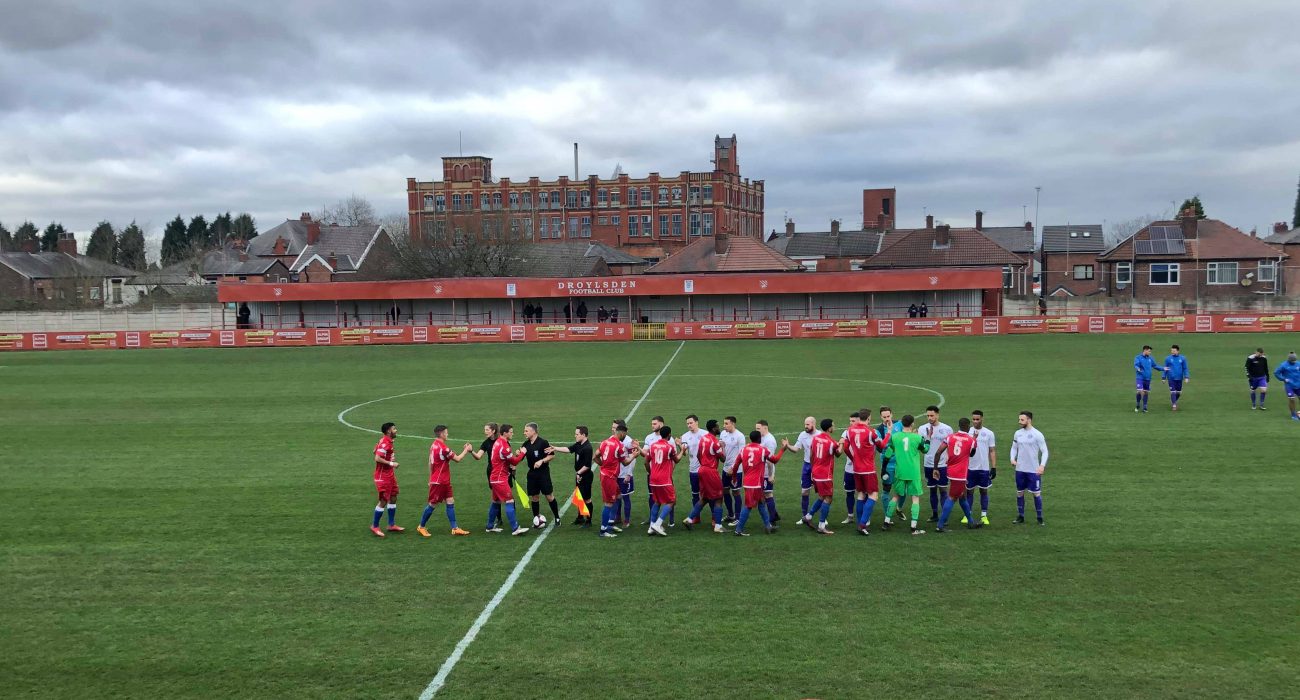 On Saturday 1st of February I went to watch my local team Droylsden F.C., affectionately nicknamed The Bloods, take on Ramsbottom United at the Butcher’s Arms Ground in Droylsden for their clash in the BetVictor Northern Premier League North West Division. Before kick-off, I went to order a pint at the club house. The beer was poured into a glass, though I noticed the bloke next to me asked for it in a plastic cup. ‘Wait, I can take it outside to watch the match?’, I asked the bar staff. The man next to me laughed. ‘This is proper football, here,’ he said, laughing. I felt a sense of imposter syndrome as a football fan who regularly attends Manchester City games. However, already I had two of the things that fans who romanticise non-league football hark on about: a cold pint of Carlsberg in a plastic glass and a beleaguered non-league fan in my ear, casting aspersions on the state of the modern game.

If you get the 216 bus from Piccadilly in the centre of Manchester, and glide past the coruscating Etihad stadium in Beswick, you eventually make your way past the Butcher’s Arms stadium before the bus terminates in Ashton-Under-Lyne, the administrative centre of Tameside, Greater Manchester. Tameside is unique in that it plays host to a number of clubs that exist outside of the football league – Curzon Ashton, Hyde United and Stalybridge Celtic, to name a few. Droylsden, though, are perhaps best remembered in the wider footballing consciousness for being expelled from the FA Cup in 2008. Following a successful cup run they were kicked out of the competition after fielding an ineligible player against Chesterfield in a 2-1 victory. Dave Pace, who has acted as chairman-manager since 1996 and and has consequently re-built the club, was furious, stating via the BBC: “It was a genuine mistake by our secretary. Fine us by all means but don’t kick us out.”

Skip to 2020, however, as Droylsden sit at 13th in the table and their opponents first, the quasi-FA Cup glory that was snatched away is just a bitter memory. Droylsden were ramshackled by Ramsbottom due to a brace by Josh Hmami and a goal by Ruben Jerome. The game was wildly disrupted by a violent swishing wind as it manipulated the ball; swinging it wildly, leaving the players to second guess where it might land. Droylsden’s stand-out player was their right-back Shaqs Antoine Clarke, who dived forward with aggression, though his crosses were often met with pithy attempts to scramble the ball into the goal. The travelling fans were vocal throughout the game — adapting the Seven Nation Army chant to their own players, as they sat behind a flag that read ‘Rammy Ultras’ positioned behind the Droylsden goal. The Droylsden fans, though, stayed, cheering their players until the final whistle.

Post-match, I had a chance to chat with a Droylsden fan who follows the team across the country. He said that numbers had been dwindling as of late, and he partially lays the blame on the recent successes of Manchester City. However, it is clear that far away from the half-and-half scarves and the selfie sticks, there is more to football in Manchester than the two big clubs, with football an intrinsic part of Mancunian culture in the towns that orbit the centre of the city.