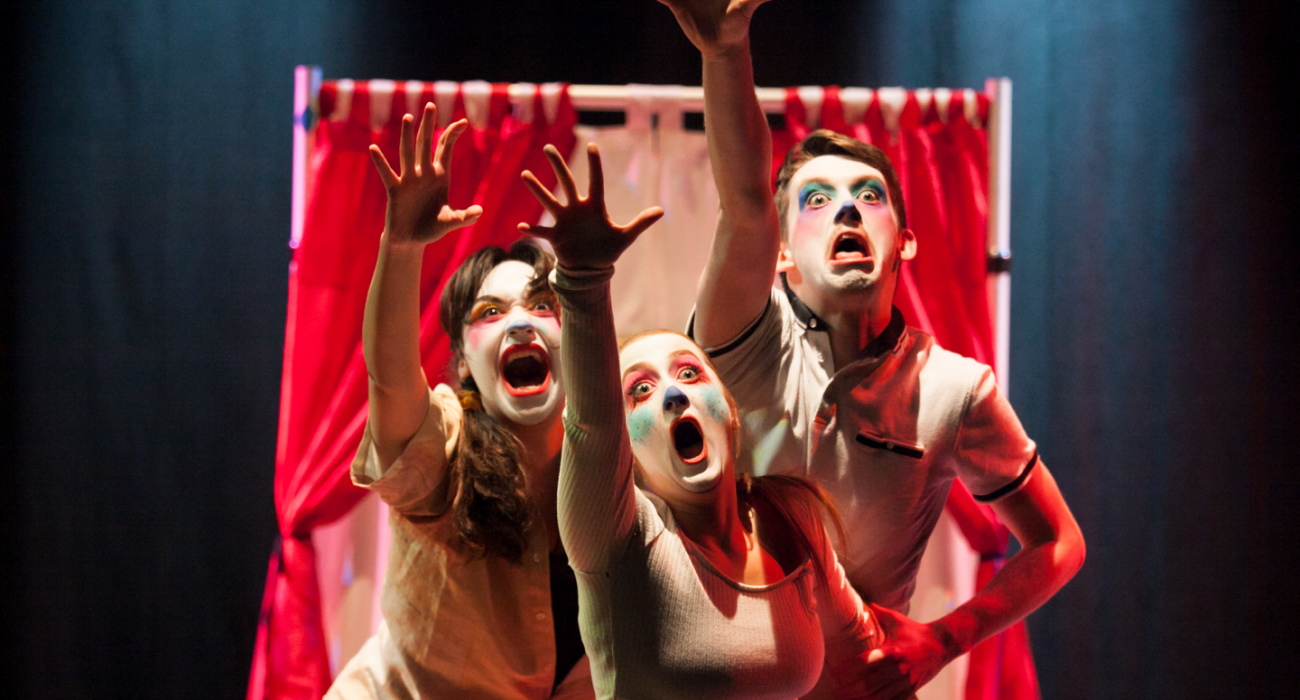 After the best 3 years of your life what is left? Bost-Uni Plues.

Through a combination of verbatim, slapstick comedy, high-energy dance and techno music, Ugly Bucket gives clown comedy a new lease of life in this honest and downright hilarious retelling of life in Bost-Uni Plues beyond the final safety net before adulthood: university.

We begin our journey with the clowns at their graduation ceremony, their backs facing the audience as the graduation speech is being given. As each one is given their degree, they turn around with hilarious nervous smiles, which instantly communicates: ‘What do I do now?’.

It was from this very moment that I, as an audience-member, fell in love with the three clowns and their completely relatable content.

We were transported back to the very beginning of their university experiences; from the moment they received their A-Level results. With ‘this is going to be the best three years of your life’ on loop to a techno beat, we watch the enthusiasm of the Clowns grow alongside their expectations of university.

Once they finally reached university, the relentless laughter amidst the audience increased. From fairy lights to awkward hellos, they rinsed and ridiculed each aspect of being a bright-eyed-fresher.

After freshers’ week, the clowns zoomed past second-year and third-year, in a video game-style, the speed rapidly increasing, until they finally reached their much-anticipated graduation.

It was at this point that the elements of verbatim really came to life. Clips of different people discussing their post-graduation experiences, which ranged from ‘the best summer of their lives’ to another describing it as ‘one of the worst times of their life’.

This contrast was brilliantly communicated through the lens of the clowns. They re-enacted the first girl’s wonderful holiday to Hawaii, swimming with turtles to the sound of steel pans, which was continually interrupted by the interview of the second girl, who was crying as she discussed her post-uni depression.

As the performance continued, my concern about its pessimism increased as the interviews persisted to talk so negatively, comparing leaving university to ‘falling off of a cliff’. So it was very relieving that they brought it round by visiting their interviewees a year later to reflect on their Post-Uni blues!

This was an important piece of theatre which addressed a niche which is hardly spoken about. Ugly Bucket’s use of verbatim was comic, cathartic and healing; it opened up a wider dialogue.