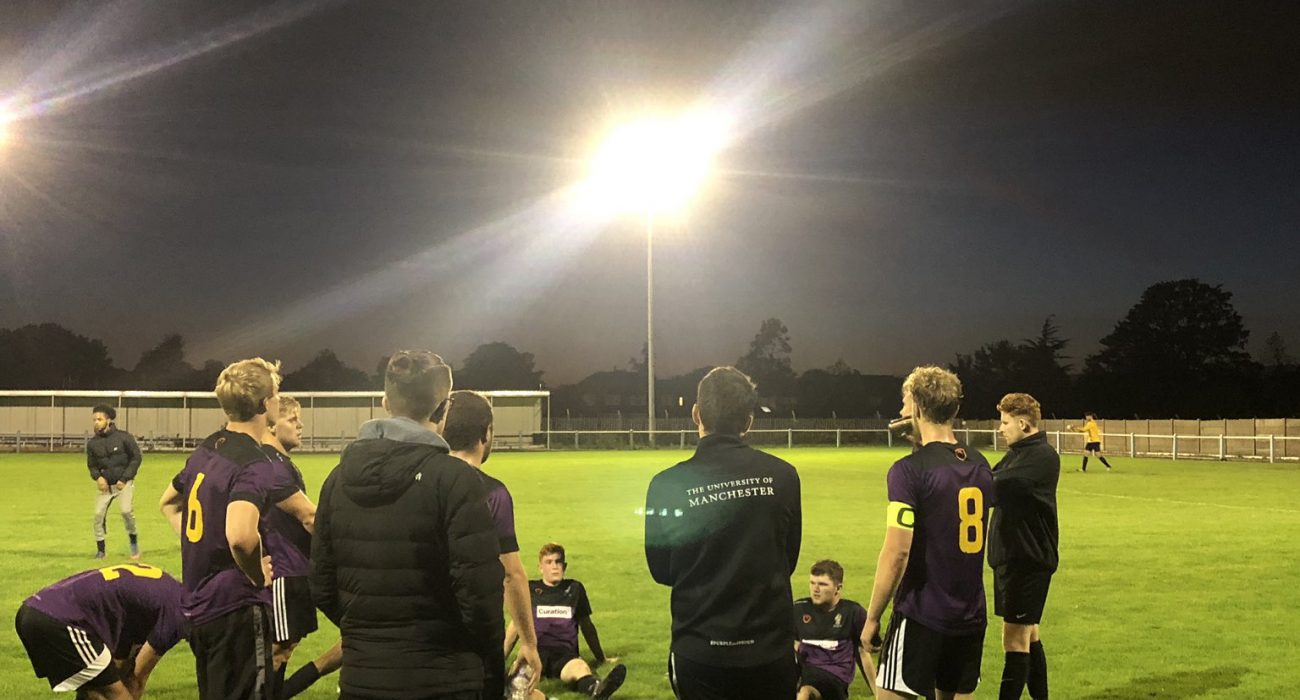 Only a select few get the opportunity to captain their university’s first team in their chosen sport, with the odds being especially low in a uni such as ours with over 40,000 students.

Yet, this is exactly what Hal Wood, captain and central midfielder for the Men’s University of Manchester football firsts, has managed to achieve.

After playing for the University for three straight years, I caught up with Hal to grasp the ins and outs of what it means to represent the University in a particularly popular sport and how this season, in particular, is going so far.

Hal described the season so far as “a rollercoaster,” and “premium uni football – thrilling and unpredictable.”

“At our best we have torn apart semi-pro level teams when playing with 10 men, at other times we have thrown away a lead against bottom of the league teams at home.”

The team are currently involved in a tight scrap for survival in the Men’s Northern Tier 1A division, sitting level on points with Liverpool John Moores and just two points behind UCLan – two teams who they have shown they can already beat this season in various competitions.

The team sometimes travels across the country for matches, a feat which Hal says can be challenging. The furthest the team have travelled this season is to Newcastle “in a classic secondary school 16-seater minibus.”

“All of the lads had cramp after 3+ hours as there was less legroom than you get on a Ryanair economy flight.”

Eventually losing 2-1 after travelling such a distance perhaps shows one of the downsides to an otherwise enviable university set up. Hal then went on to explain the rules of the bus that seem to run through right from secondary school to professional football:

“Whoever controls the speaker controls the mood – UK rap reigns supreme. Some will listen to their own music through headphones, AirPods etc. Every away day our left-back falls asleep, almost instantly, without fail and wakes up 5 mins before we arrive. Journeys are a lot more serious on the way there. The back of the bus is the prime spot with freshers and younger players sitting closer to the driver.”

Hal told me that the squad are largely united behind another team, too: Manchester United. “There are also rogue Sheffield United, Preston North End and Leeds fans but the Red Devils are a clear majority. It makes you question whether lads have come here for their education or the theatre of dreams.” – While laughing you can tell he knows it is definitely the latter.

After delving into some of the lighter topics, I was keen to gain an understanding of the challenges that student footballers face when leaving full-time education. Many people tend to drop their sports when the opportunities and structures fall away from them, be that after school or university, yet Hal seems to have a – albeit laid back – plan for the next stage of his life, and of the role football will play in it.

“I love playing football and will play as long as I am able to. If I continue to live in the UK then I will play semi-pro and work my way up the leagues. Currently, I am planning a year abroad travelling which will be more of a Ronaldinho on the Copacabana kind of vibe. Wherever I live, I will always make time to play some footy.”

Finally, I wanted to gauge the influence that university sport had on the final year student. He said that playing University football had benefitted his social life, as well as his fitness and health.

“For the first two years, it was a class social scene and was a great opportunity to get to know other lads. The AU sports nights out on Wednesdays was a weekly pilgrimage: memories of them have merged into one blur. As I’ve spent longer here at Manchester, football has provided more structure to my life and plays a key role in keeping me healthy, strong and energetic.”

In his third and final year playing football for the University, nostalgia is certain to set in for Hal. However, after getting past Liverpool John Moores and Edinburgh in the Men’s Trophy, a home match against Sheffield Hallam is the next hurdle on the route to possible silverware. He will have to focus on the coming months before being able to fully look back on his time at the University of Manchester with rose-tinted glasses.