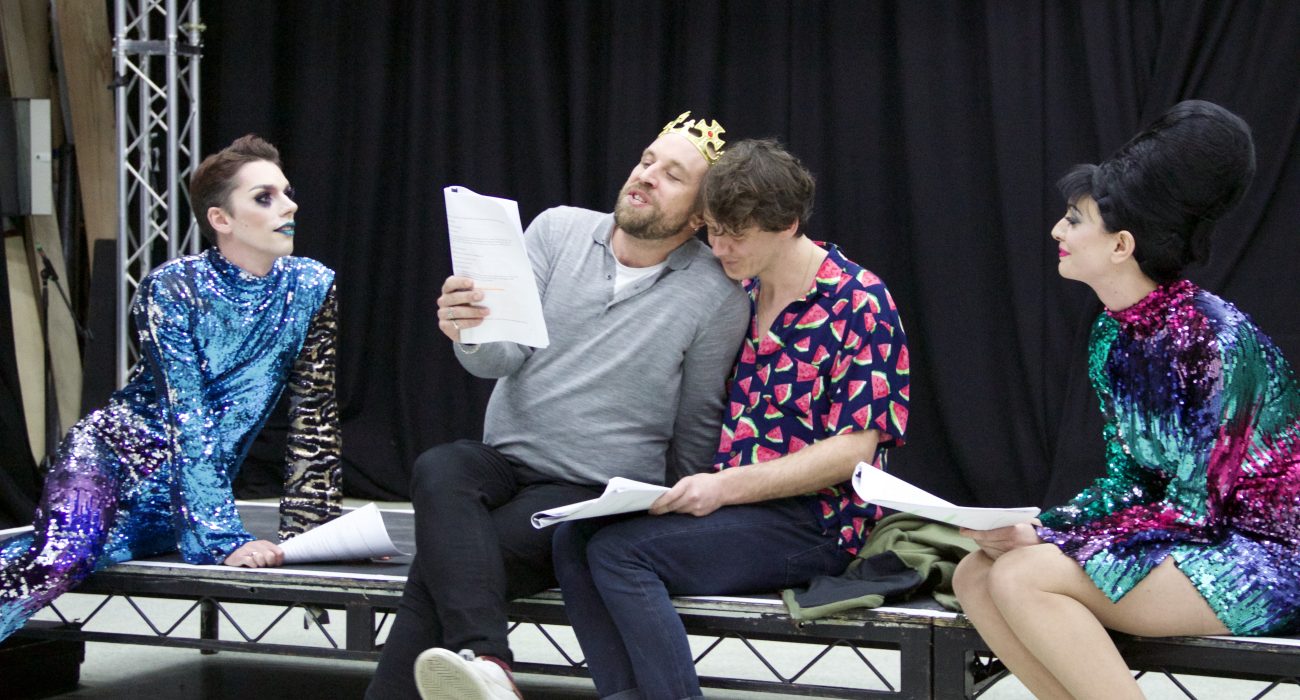 This week, London cabaret duo Bourgeois and Maurice are bringing their first ever musical, Insane Animals, to the stage at Manchester’s HOME theatre. The show is also the first musical commissioned by HOME.

As I discovered first-hand at the press event last week, it’s set to be a wild ride. Director Phillip McMahon said going to see the show will be “the glitziest, most exciting night out”. We got an exciting preview when he kindly sneaked us backstage to show us what they have in store: think glitter curtains, reflective floor panels, futuristic props and the brightest costumes you can possibly imagine.

Written and composed by Bourgeois and Maurice themselves (whose real names are Liv Morris and George Heyworth), the musical’s plot is based on the age-old Epic of Gilgamesh but, as McMahon clarified, it is not the most faithful retelling of the story.

In terms of what to expect, McMahon told us this musical “takes the DIYishness of a drag show and paints it onto the wide stage”.

The cast have been rehearsing for a month now, and the strong bond and friendly relationship between them all was a pleasure to see. When telling us of the amazing chemistry between them, McMahon said that “the planets have aligned on this show”. This didn’t seem surprising to me when I spoke to the other members of the cast, who were all so kind, enthusiastic and passionate about the show, you couldn’t help but want to be a part of it yourself – even if that means just as an audience-member.

When I asked Bourgeois and Maurice what readers of The Mancunion could expect from the show, George instantly replied that it’s “loud and bright and flashy, it’s really queer” and “a very Instagramable show”. But because of the underlying story – the Epic of Gilgamesh – he specifies that it raises an important message to today’s audience, one that young viewers and students will certainly relate to: “the serious question of mortality and how we grapple with that”.

Liv added to expect “lots of songs and silly rhymes” but that “it has a serious heart to it”, which we got a glimpse of when they performed three songs for us upon our arrival in the rehearsal room. The lyrics were extremely clever: when welcoming Gilgamesh to today, the social commentary was evident with the rhyme that we are in the “age of the individual, of the digital”, as well as the innumerable parallels with Trump and what legitimates authority.

In using the deities from this ancient text, the musical is able to question what the power of humanity is and whether we are the gods now, which Liv rightly says younger viewers will be able to relate to.

The third and final song we were shown was a moment of quiet reflection for Gilgamesh, played by Lockie Chapman, former band-member of The Overtones. His brilliant acting of the character’s heartfelt emotion and incredible baritone vocals left us all in silent awe when the song finished.

Sitting and chatting to him was just as much of a pleasure as he welcomed us like we were old friends. With excitement, he told us how amazing the costumes are, with latex, glitter, satin and jewels to name a few. At this point, I expect nothing less since McMahon has already told us the costumes are designed by Julian Smith, one of the designers on RuPaul’s Drag Race UK.

“It’s going to be bonkers,” Lockie says, whilst also explaining how the text of Gilgamesh is “revealing” but also “refreshing”, because it states that there are “male, female and non-binary gods”.

If it’s not evident enough already, a night out to see Insane Animals will without a doubt be an unforgettable night in every way possible. It’s definitely not one to miss. I for one cannot wait to see more of the incredible snippets I have already seen with one of the friendliest casts I have ever encountered.

Colour, chaos and charisma are the words that spring to mind with this show – and who doesn’t want all those things when out for an evening of entertainment?

Insane Animals runs at HOME Theatre from the 28th of February until the 14th of March.