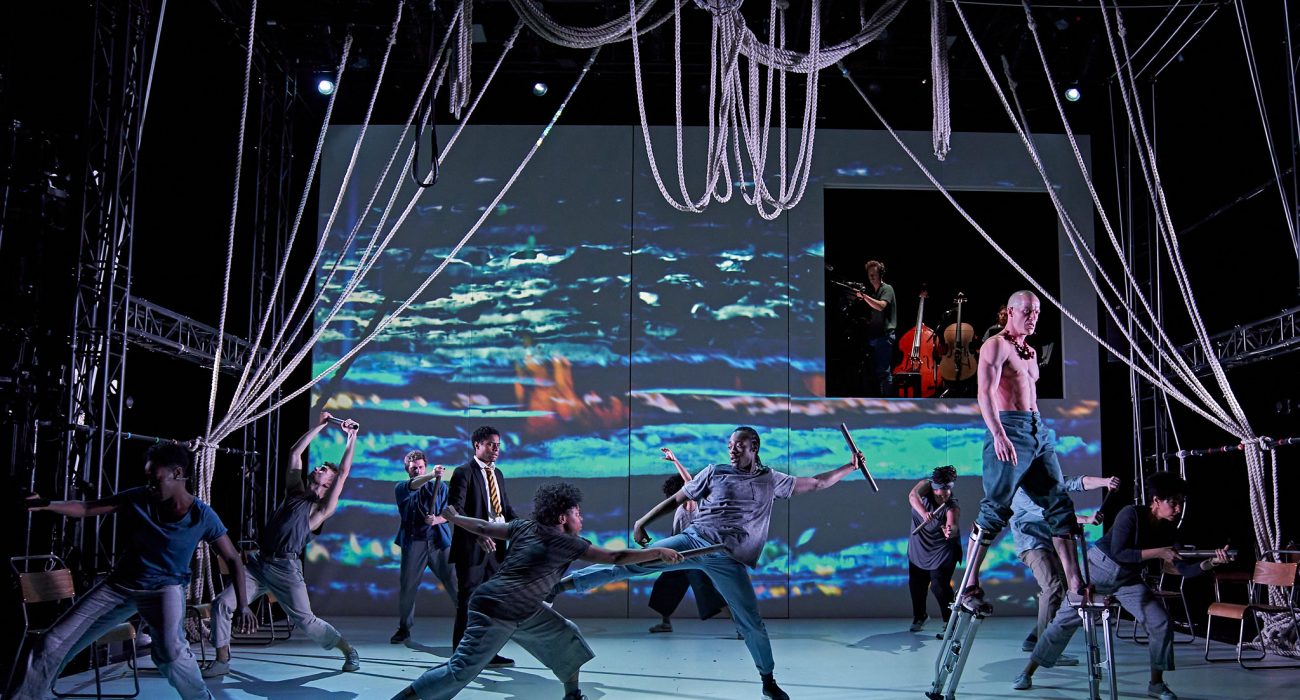 The first thing I noticed on the opening night of A Monster Calls at the Lowry was that the audience was full of school-children. The original book and film may have been more kid-friendly, but this version of the story was a lot more raw, interpretive and dealt with some quite adult themes.

The set was minimal, comprised of white and beige tones – chairs for the ensemble and ropes suspended from the ceiling. The cast were dressed in neutral tones and all remained on the stage together, throughout the play.

Ammar Duffus plays the lead, Connor, a boy in Year 8 learning to deal with his mother’s cancer diagnosis. Duffus’ portrayal of the young boy is effortless. He was able to sound like a frustrated child without over-acting it. You forget that he is a grown man as he dominates the stage despite playing the youngest character.

One of the questions everyone was asking was – how are they going to create the Monster? Played by Keith Gilmore, the monster had a thick Scottish accent and strong stage presence. He spent most of his time suspended among the ropes, sometimes with a harness but often without. His ability to morph his body and spend the whole of the play climbing around the stage – in what can only be described as a full body workout – was outstanding. This, paired with his commanding voice and heavy, purposeful lines meant his version of the Yew Tree Monster was serious, sometimes scary, but still caring.

The ensemble were incredibly cohesive. They could work as one fluid unit for one moment, and in the next, they were all individual characters, each with their own distinct personalities. The play was highlighted by the use of interpretative dance and music. The cast were able to create physical movements to display emotions that are hard to describe and gave traumatic scenes more power.

The lead musician, Luke Potter, did an amazing job of bringing the play together. The music during the most pivotal moments and in between scenes was beautiful. It only added to the play and you almost didn’t notice the transitions because it was performed at such important moments and gave the audience time to think.

Some of the most important moments were incredibly realistic and relatable. A personal favourite was the clock scene. Duffus was given free reign of the chairs and threw them around to show him breaking his grandmother’s prized possession – a grandfather clock. You couldn’t help but sympathise with the boy as he destroyed the stage.

By the end of the play (spoiler) Connor was able to admit his truth and move on with life after his greatest fears were accepted. In this final scene, you could hear sniffles from the audience, and the standing ovation really punctuated the night.

Make sure you get down to the Lowry to catch this brilliant show – you won’t be disappointed.

A Monster Calls runs at the Lowry until the 29th of Feb before continuing its tour around the UK.