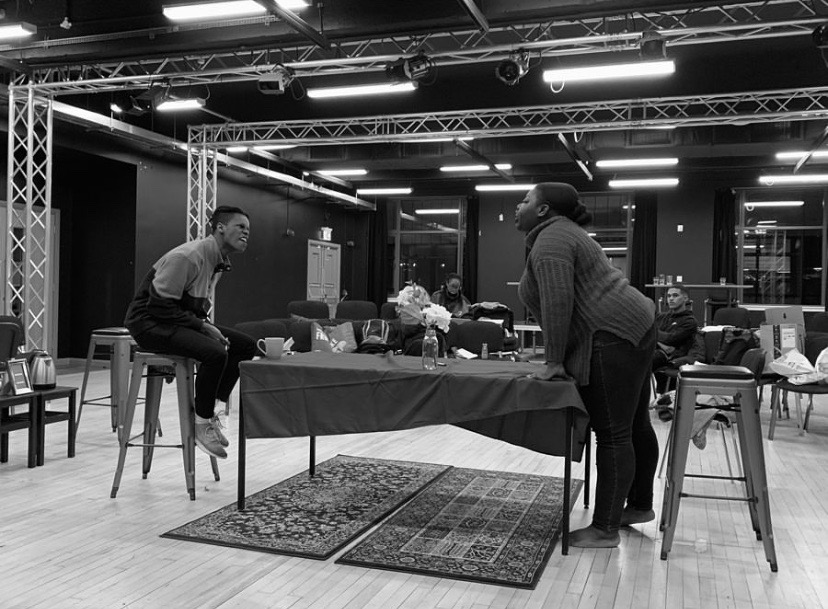 Debbie tucker green’s Nut, which premiered at the Royal Court in 2013, has been thoughtfully reimagined in a University of Manchester Drama Society production directed by Patience Kanjira and Sophia Hadji-Michael, performed as part of the drama society’s MIFTA season.

Kanjira and Hadji-Michael have a clear love and passion for the play – this is reflected in their attention to the details of the text. From a series of post-it notes that adorn the stage floor and walls, which only upon close inspection show us lists made by the semi-reclusive protagonist, Elayne, to the kettle from which boiling water is poured and the steam which rises from each mug, this cumulative focus on the intricacies of the work, which must also be credited to producer and designer Millie Loveday, give the production an immersive and intimate feel.

The performances are equally intimate. They invite you into the isolated world of Elayne who is played by Ebun Osobu, whose quiet strength in this role evokes sympathy even in Elayne’s moments of rage and unpleasantry.

Amelia Jacobs and Thomas Bakker are equally intimidating as Aimee and Devon, respectively, at once friends of Elayne’s and oppressive forces who seem to push her further into her own psyche. Like voices in one’s own head, the pair demonstrate the overwhelming nature and destructive power of a conflicting inner monologues.

Nyah Nish’s voice rings out peacefully through the space.

Her presence resembles moments of quiet in the storm and provide a reminder of everything Elayne has lost: a childhood innocence and instinctive freedom to sing aloud, now replaced by ritual and internal conflict. The dynamic between these performers builds to a crescendo, like a kettle boiling over, which makes wonderful use of tucker green’s rhythmic text.

No-one understands these rhythms quite like Kwame Owusu, however, who explodes onto the stage as ‘ex husband’ and proceeds to spar with ‘ex wife’, performed by a ferocious Patience Kanjira. Owusu leaves the audience hanging on his every word, and in his silence has a magnetic quality that you can’t seem to look away from. Kanjira matches this energy, proving her understanding of tucker green’s play, both through her performance and direction of this moment.

The interplay between the pair is truly jaw-dropping and stays with you long after it’s conclusion.

The production has a vulnerability that shines through to its closing moments. Its focus on language and the dynamic of the spoken word, paired with a stripped back stage and simple but effective costume design, bring the conversation about mental health to the forefront. The play is at times a difficult watch, but it is certainly an important one. At the end of the performance, as the lights went down and Osobu embraced Kanjira, I could not help but feel incredibly moved. This was only furthered by Kanjira’s poignant speech to the audience, highlighting Nut‘s significance as the first play in Drama Society history performed by a majority black cast. The representation of mental health, certainly in the BAME community, is seldom represented onstage, and it is refreshing to see such an honest conversation in motion.

At the end of the show, we were invited on stage to view post-it note testimonials, disguised in with Elayne’s own lists, which discussed experiences of mental health that Kanjira compiled over the course of the production. The door is open, even if the doorbell needs new batteries, and that is something this whole team should feel incredibly proud of.