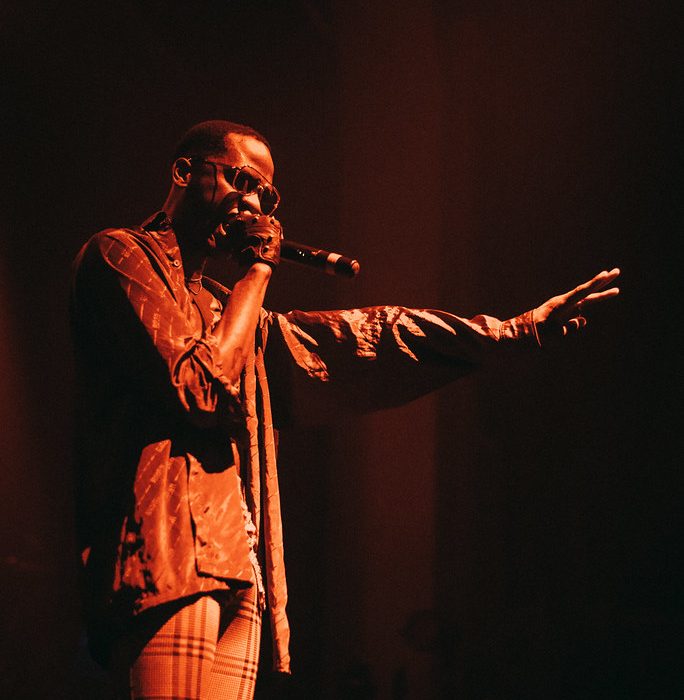 Yves Tumor – real name Sean Bowie (who goes by they/them pronouns) – has become a cult figure in leftfield, experimental music over the course of their 4 albums.

The most recent, Heaven To A Tortured Mind, is their furthermost stride into accessibility whilst still retaining their eclectic instrumental palette.

Right from the first seconds of ‘Gospel for a New Century’, Yves gives the listener a taste of what’s to come: the quirky brass samples mixed with funky bass, giving way to their lovelorn, playful vocal performance. It’s a very clear amalgamation of various genres from the past few decades but coalesces together to create something that bears almost no resemblance to the genres it borrows from.

The lyrics also act as a taster of the rest of the album’s content, which features Yves musing over a doomed romance. Equally love-centric lyrics are found on almost every track, interpolated with strange gothic imagery.

Wedged between the opener and the second single ‘Kerosene!’ are ‘Medicine Burn’ and ‘Identity Trade’. The former opts for a classic funk style instrumental that is gradually overlain with extra noise elements creating a cacophony of guitar, synth and cackling at its climax, before disappearing into an ambient finale, making way for the comparatively downtempo, poppy-er subsequent track, ‘Identity Trade’.

One of the shortest songs on the record, ‘Identity Trade’ meanders along after the previous riot, and as a result is one of the least memorable. It is pleasant to listen to, but the song structure is relatively thin on the ground, and it ends before it can go anywhere different.

This makes way for what is considered by many to be the showstopper moment of the album – ‘Kerosene!’ The duet features the angelic voice of Diana Gordon, initially a soft-rock ballad that quickly bursts into arena-ready psychedelic, soulful guitar work, weaving its way in and out of focus, as both singers once again are seranading their lovers – proclaiming their need for kerosene and presumably designating themselves as a lamp.

It shows how far Yves has come since his previous works, as he is now so successfully molding his brash experimental-ism, learnt over the preceding decade, into these easily accessible tracks, without them losing their alternative appeal.

‘Hasdallen Lights’ is another chilled-out, almost interludial track, and falls victim to a similar problem to ‘Identity Trade’. It is over too soon and seems stuck between tracks that are, in comparison, much more interesting to listen to.

This is especially the case when followed by the two-parter ‘Romanticist/Dream Palette’. ‘Romanticist’ alone manages to achieve more than the previous track despite it’s even shorter runtime. The track contains a catchy, poppy chorus supplemented by another guest vocalist (Kelsey Lu) which then collapses – signalled by the sound of fireworks and strange synth warbling – into the second part, titled ‘Dream Palette’, which also somehow manages to create another ear-worm chorus to accompany the crunchy, bass-driven instrumental.

The final 5 tracks of the album run the gamut of genres that the album dips into. ‘Super Stars’ is very much a classic funk song with a hook straight from the caverns of 60s classic rock, whilst ‘Folie Imposée’ sees Yves return to their glitched out roots. The artist’s voice mumbles in the background whilst jerky, ripped apart guitar lines decorated a blown out bassline.

‘Strawberry Privilege’ comes across as a hybrid between indie pop of the late 2000s and funk elements – specifically with regards to the bass playing. ‘Asteroid Blues’ is a brief instrumental detour that, more than anything, creates a tense buildup for the final track with its plodding bass and strange echoey noises in the background.

The finale in question is ‘A Greater Love’ – a very classic, slow romantic ballad over sleek instrumentation, ending in a brief guitar line to close out the admittedly surprisingly short record.

Considering the sheer amount of genres that Bowie chooses to dip into from one track to the next, you’d be forgiven for thinking that the album would sound incoherent – but that is not the case. All of the songs still sound like Yves Tumor.

Despite them delving into new genres in comparison to their previous work, and despite there being no real work on making the track transitions smooth (most of them will fade out and then end), Heaven To A Tortured Mind still sounds cohesive. What’s more it feels like a passion project, and the care that Yves Tumor has taken in creating it really pays off for the listener.