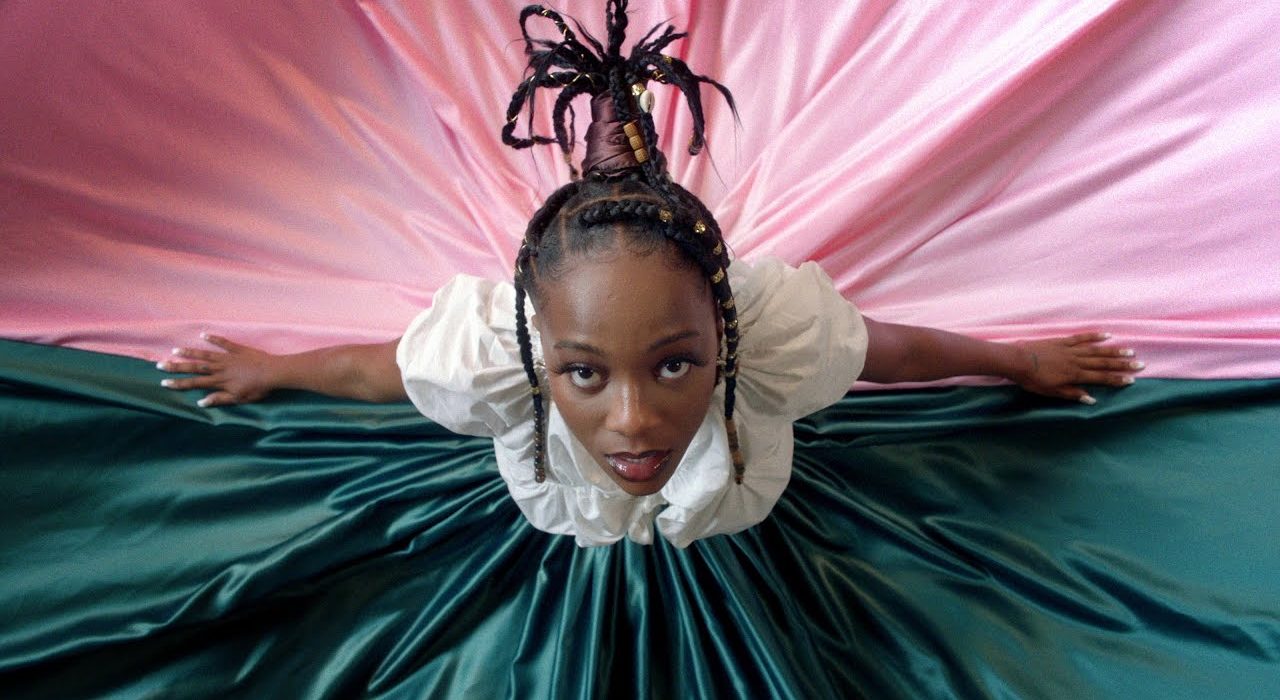 From the official music video for 'Darker Place'

The UK has a long history of producing excellent and emotive female vocalists. Everyone from Dusty Springfield to Adele has graced world stages, and in recent years, several key British pop music vocalists have begun to venture away from traditional pop formats and towards more alternative influences. Born and raised in Croydon and taking inspiration from Coldplay to Ladysmith Black Mambazo, Rachel Chinouriri is an exciting presence among these new voices in British pop.

Though she garnered attention after a string of acoustic singles from 2018 onwards, it’s Chinouriri’s latest offerings that are starting to create serious buzz and rack up hundreds of thousands of Spotify streams. ‘Darker Place’, her first single of 2021, combines steadfast pop sensibilities with an alternative, slightly eerie groove, and was accompanied by an excellent Joe Goddard remix. Her latest offering ‘Through The Eye’ develops this sound further, and manages to evoke both Lorde and more electronic acts like Bicep. The Mancunion chatted to Chinouriri about her approach to songwriting, the alt-pop scene in London, and her plans for the next year.

You were the first in your family to be born in the UK, and grew up in a Zimbabwean household in Croydon. How has that influenced the music you write?

I would say it’s had some sort of influence because growing up, I was sheltered from a lot of things musically. So a lot of ‘classic music’ that people grew up listening to – I’d never heard it. Because my parents were Christian immigrants who were like “Nope – you’re not listening to music of the world.” “Christian music or African music, that’s all.”

Definitely when I was younger, I was stopped from listening to a lot of stuff. So discovering things like Coldplay and Daughter, that was like my secret thing I would do in my house. But I still had the influence of African music with the harmonies and stuff. I would say harmonies in general are one of my biggest influences. I feel like the little influences I had kind of made me come up with my own sort of sound, and way of singing.

Your music has started taking off just as everything around us has been shutting down. How has that affected the way you approach the songs you’re writing?

I always try to worry about how songs will sound live. When you perform live, there are so many people who are open to discovering something new, so I need to make sure that when they hear it they’re not going to walk to the next place and be like “alright, that was boring.” I need to make sure when they hear it they’re gonna be like “Oh! Ok – that was interesting.” Especially when we’re finishing up a song, I’m in the studio trying to dance it out and figure it out.

You’ve worked with producers from Joe Goddard to p-rallel; is the alternative electronic scene in the UK one that you’re moving towards?

I would say [alternative electronic is] definitely the sound I’m gravitating to in ways… There’s elements of what they do that I want to interpret into my own music. I do want to try and mix the indie sound with a bit of alternative; a bit of electronic; a bit of pop, and try to make that my own sound.

Your earlier releases were a lot more acoustic, but the newer stuff has much fuller production, with new sounds incorporated. When you first began writing songs, who were the key inspirations?

Daughter, definitely… Coldplay is a band which I loved when I was really young, and then there’s Ladysmith Black Mambazo. Those three were, like, my inspirations growing up. I like how with Coldplay, there’s always a story being told. With Daughter, I love the ambience, and that sort of electronic vibe. I love that sort of sound. And then Ladysmith Black Mambazo; it’s the harmonies, and the way that they use the voice as an instrument. That’s the combination of inspirations I’ve had growing up.

In recent years, attention on London artists from minority backgrounds has moved away from a strictly grime or drill focus, and there’s a host of indie and alternative artists coming to the fore.

Do you feel as though there’s a scene there? Would you consider yourself part of that?

I definitely see it as a scene that I want to be more a part of. I feel like as a black person, there are genres that are predominantly made by black people – like grime, drill, RnB, etc. I’d say starting out in music, it was very hard to break out of the RnB stereotype. Like, a lot of people who didn’t know what I looked like would listen to my songs and go “oh this is kind of indie, this is kind of pop”. As soon as people would see me, they’d go “Oh! You kind of sound like Lauryn Hill actually!”. And I’m like “no, no I don’t”.

“Oh you know what, you could be really like soul and r&b!” – that’s not what I am at all. Starting to see more people such as Master Peace and Arlo Parks – you know, minority people who are branching into more genres – I feel like there’s really a space for us.

You mentioned being placed in genre boxes. What’s your method for trying to find your own sound?

I feel like I’ve had a lot of time to be open and experiment. But now, from the years I’ve had writing, I’ve definitely found how to navigate myself when working with new producers. I would say, before 2020, my managers put me with so many different people, and they were like “just experiment, see how to conduct yourself in a session”. But now in 2021, I know which things work for me.

I know when I make a song that sounds like my song, and not just a song that I know will never come out. So I’ve managed to find a way where it’s like,”these are my influences”; alternative stuff – I love Sampha and stuff like that, showing my influences, and being able to tell the producer that these are the elements I like from these people. “Let’s make a song with it,” but also stay true to myself.

Talk to me about Darker Place. What were you drawing from for that song?

With ‘Darker Place’, the producer I was working with, Jamie Lloyd Taylor [and I] were discussing crime documentaries, conspiracy theories and all sorts of crazy stuff. We started playing in a bass line, and from then, for that song, we definitely focused a lot more on the singing, and the lyrics, and how to make it sound kind of creepy.

That’s why I’m whispering – the attitude and delivery was the priority in that. And then making the production feel like it’s sparse, but still quite saturated. That was the approach we had for ‘Darker Place’: something that could still work live or when it’s played on radio, but to always remember that there’s this dark undertone to it.

A year from now, what are you hoping to have released? Where do you see yourself as an artist in a year’s time?

RC: I feel like in a year’s time, I want to be able to have built a body of work – let’s say like an album. I want to have built something that I’m so proud of, where I’m like “this is the best thing I’ve written” at that moment in time.

I want to be able to make a project that you can’t skip, like every single song has a meaning within it. That’s what my priority has started to become. Based on the experiences I’ve had this year and last year, I feel like next year I’ll be able to have a definite thing, like: this is Rachel Chinouriri, this is what I am, this is what I do. Before I was definitely experimenting, but now I feel like I definitely know my sound, and I know what I want to be seen as.

How would you describe that sound?

It would be full of sorrow, both electronic and acoustic, and it would be heartbreakingly beautiful. You’d play it on vinyl and it’d, like, absorb your whole brain. Something along that group of words.

To wrap up, how would you introduce Rachel Chinouriri to people who have never heard of you before?

I would want people to know that I wear my heart on my sleeve. I would want them… Gosh! It’s like I don’t know but I do know. I just want people to know that I’m being as vulnerable as I am as a person. I want them to openly listen to what I have to say, with an open mind and open heart, and try and understand the story. The story is always my priority. If I was to pitch it, I’d say listen to me with an open heart, and try to understand where my heart is when I write anything.”

This interview has been edited for clarity.