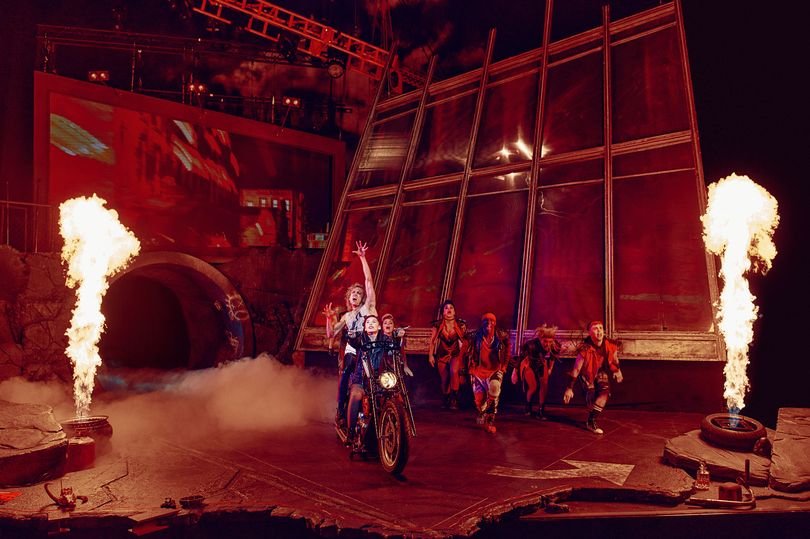 After four years, the Bat is back – right where it started, here in Manchester (aka the third best city in the world, as I’ll keep reminding you).

Bat Out of Hell is based on the Meat Loaf album of the same name.

Steinman wrote all of the musical’s songs, most of which are from the Bat Out of Hell trilogy of albums.

The musical is a (very) loose retelling of Peter Pan (but also alludes to Romeo & Juliet at times, especially with the theme of star-crossed lovers.).

Set in post-apocalyptic Manhattan (now named ‘Obsidian’), the story follows Strat, the forever young leader of ‘The Lost’, who has fallen in love with Raven, the daughter of Falco, the tyrannical ruler of Obsidian.

Whilst Hamilton refers to New York City as “the greatest city in the world”, it didn’t even make top three. You know why Manchester is better than New York? We’d never fall to a dictator; we’re unconquerable!

I’ve been wanting to see Bat Out of Hell since 2018, especially when Jordan Luke Gage – who I was lucky enough to interview ahead of the world premiere of & Juliet – took over the lead role of Strat.

I remember being sat next to one of his friends whilst watching Company (starring Rosalie Craig and Patti Lupone) and beginning to plan another London trip so that I could catch Bat before it closed.

Sadly, that trip never came to fruition, so I was ecstatic when it was announced that Bat was coming to Manchester (don’t worry, I won’t say it again).

Bat has to be one of the best musicals I’ve ever seen – and I’ve seen a lot!

The costumes are fantastic (with my leather jacket, paisley bandana and snake ear cuff, I could fit right in), and the show makes great use of technology.

The set is brilliant, though not as elaborate as some other musicals; most of the set is fixed, but there are additions in certain scenes.

The stage left is where Raven’s bedroom sat; it was mostly closed off; we could just see through the window and door.

When a scene was set in that room, a camerawoman followed the actors around and the footage was shown on a large screen on the stage left. This was a weird, though memorable, creative choice. I’m not sure what its purpose was; I imagine it serves quite a clever purpose, perhaps I’m just not smart enough to understand what.

One of the musical’s highlight was the vocals. Most Meat Loaf songs require powerhouse vocals, and this cast did not disappoint.

I was very curious to see what Jordan Frazier, who plays Zahara, would be like. The role was originated by Danielle Steers in Manchester; she went on to play the role in London, Toronto and New York. She also played Catherine Parr in the smash hit musical Six.

Well, Jordan blew me away; I lost the bitterness I felt over not being able to see Danielle in the role.

My favourite character of the show had to be Sloane, the dictator’s wife (Sharon Sexton).

She was bloody hilarious. She reminded me a little of Anne Hathaway (Cassidy Janson) in & Juliet: the cooky wife of an arrogant man, determined to assert her own autonomy, all whilst entertaining the audience with her dry delivery and perfect comedic timing.

Whilst Bat‘s book could do with some fleshing out – at times, I had little idea what was going on, and scenes sometimes cut from one to another in a slightly rushed manner – the characters are all very well-written.

In particular, I like how the musical does not rely on archetypes. Instead, it challenges character conventions.

Falco (Rob Fowler) is a tyrant, but he has redeeming qualities. He provided great comedic relief; the audience loved him (especially when he stripped off to his undies. Phwoar).

His acting and singing abilities were far too good for anyone to pay too much attention to his occasionally flimsy American accent (and if ever you noticed it, you’d get lost in his abs).

Sloane could have been portrayed as your typical ice queen, or a criminally underwritten, victimised trophy wife. Instead, she was written to be the exhausted wife of a man who did not live up to be who she wanted him to be. She loved him – but not enough to sacrifice her independence.

The early scenes featuring Falco and Sloane were my personal favourites, especially when they took us down memory lane during ‘Paradise by the Dashboard Light’ (one of my favourite Meat Loaf songs).

Right from the get-go, the musical made sure that we liked the “bad guys”. Whilst Falco did some awful things, we sure loved watching him do them!

Both Fowler and Saxton originated their roles in Manchester before taking them to London and Toronto. It is no surprise that Fowler and Saxton have such sparkling chemistry; they’ve been playing partners for years!

Raven, meanwhile, was not the spoiled, pampered Princess that one might expect her to be – indeed, the Lost Boys (ordinary citizens) thought of her as such. Nor was she a damsel in distress.

Rather – much to my feminist relief – she was portrayed as an independent thinker and a rebellious tom boy who wants to challenge the status quo that she knows she is a part of – even if this means losing everything.

The least interesting character, in my honest opinion, was the lead one: Strat.

Glen Adamson’s performance and vocals were excellent, but Strat’s character arc and development were quite predictable.

The moment everybody was waiting for came at the end: I’d Do Anything For Love. Whilst this song is an iconic duet, between the Beast and his Beauty, a creative decision was made to turn it into an ensemble piece for the show. The lead characters all took turn singing different lines and verses, which made the classic hit bigger, better, brighter and badder.

In case it isn’t obvious, I absolutely loved Bat Out of Hell. Sure, I have my criticisms – that is my job, after all; it’s in the name (critic) – but, overall, this musical is an absolute blast.

For those of you old enough to remember the days when Meat Loaf’s hits dominated radios, you’ll gleam with nostalgia, especially during the curtain call, when the cast asks you to get your phones out and record them singing ‘Good Girls Go to Heaven (Bad Girls Go Everywhere)’.

For the youngsters who thought that meat loaf was a dish – don’t fret, for you’ll recognise a few of his songs (take ‘It’s All Coming Back to me Now’, though you’ll probably be more familiar with the Céline Dion version).

Nonetheless, you’ll be on your feet dancing by the curtain call; if nothing else, this musical will make a Meat Loaf fan out of you!

Bat Out of Hell plays at Manchester Opera House until Saturday 2nd October, before touring the UK and Ireland until late next year. 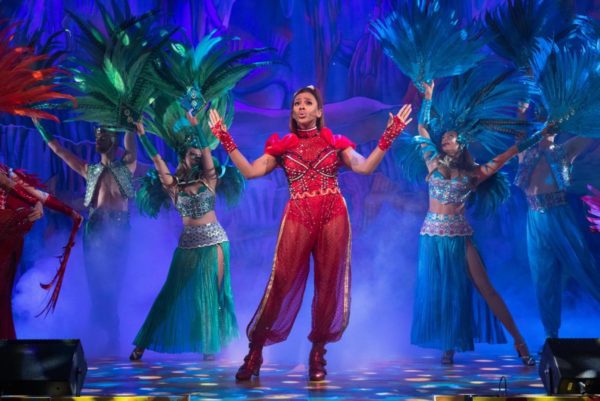