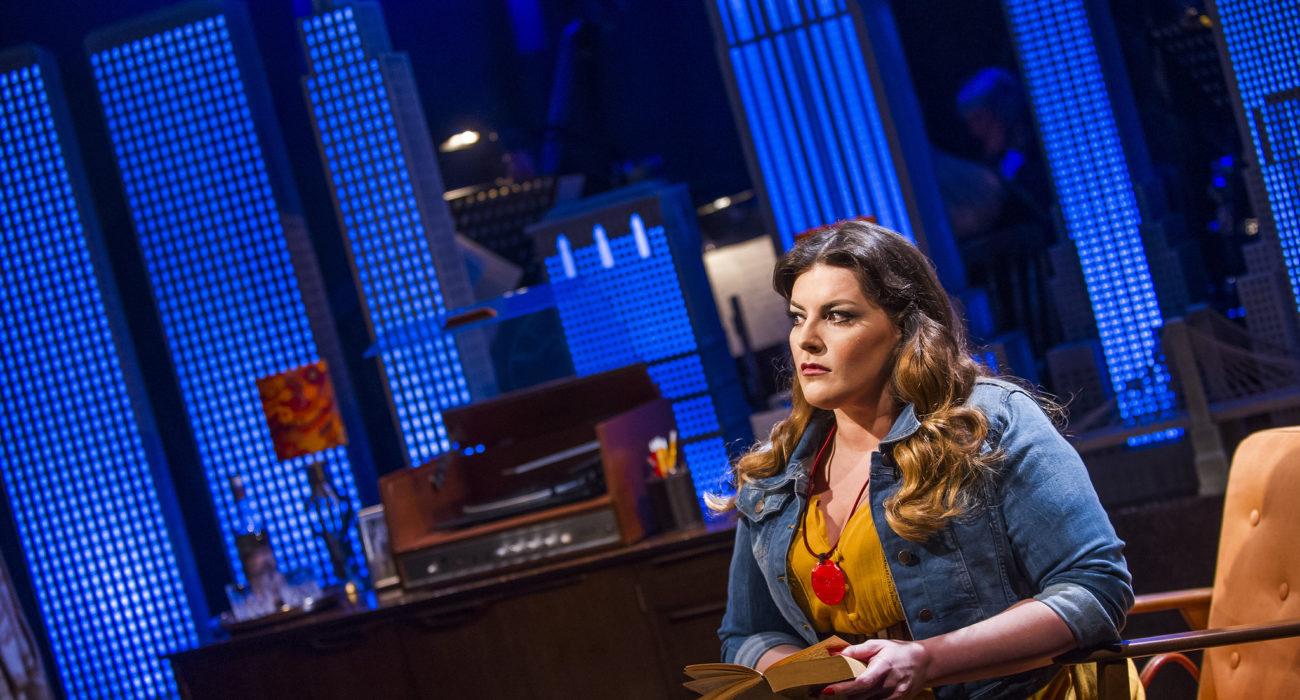 Andrew Lloyd Webber’s Tell Me on a Sunday is a one-woman, one-act song cycle that tells the story of an ordinary English girl who journeys to the USA in pursuit of love.

After being presented at the Syndmonton Festival – and receiving a positive reception – the show was recorded as an album. Following this, a special performance was filmed at the Royal Theatre in London and later broadcast on the BBC.

Following its transmission – which was a critical success and garnered high ratings – the album reached #2 on the UK charts, and the single release of ‘Take That Look Off Your Face’ reached #3.

The success of the album and the single propelled Marti Webb, the star of the show to success, at last becoming a household name after two decades in the theatrical business.

Tell Me on a Sunday was soon reverted to its one act format, though the two recent touring productions (both of which starred Jodie Prenger) have included a second act: a post-show conversation/Q&A with Prenger, featuring live performances of ALW classics.

Prenger, best-known for winning The Biggest Loser and then I’d Do Anything (which lead to her starring as Nancy in Oliver the musical), absolutely shone as “the girl”.

The one hour show requires the actress playing “the girl” to belt her way through the show, hardly getting a moment to breathe, whilst also conveying every emotion from mania to hysteria, to subdued stress and eery excitement. In this regard, the musical reminded me of Evita – another ALW musical that hardly lets its lead breathe.

Before watching the show, I’d listened to its two most famous songs – the aforementioned hit single ‘Take That Look Off Your Face’ and the title song – and I instantly fell in love. I kept myself from listening to any of the other songs so as not to ruin the story, and I’m glad I resisted the temptation because Prenger took us on a beautiful, emotional and cathartic journey that ended in my friend and colleague, Megan, tearing up.

The soundtrack has to be one of ALW’s best scores – each song conveys so much emotion, and a different emotion to the last.

Whilst the musical is made up of ballads, they vary in tone and tune. I particularly liked the occasional bit of jazz that lifted the mood. The musical could be subdued and solemn, if not even somber, so it was nice to get some sprinkles of sass every now and again.

The staging was simple but effective. The band were at the back of the stage, just about visible, hiding behind a beautiful piece of set that was made to look like part of the Manhattan skyline. It featured recognisable iconography, such as the Empire State Building, the Statue of Liberty, and the now-fallen Twin Towers.

There were brief moments where Prenger was off-stage, hastily changing costume before swanning back onstage with gravitas and dignity – even if she was about to express sorrow and self-pity. She is a captivating presence onstage, holding your attention with might even during the more mellow moments of the musical.

A one-woman show with a simple set requires its performer to be the best of the best, and Prenger really is the creme de la creme de la creme. Whilst this musical made Marti Webb, and nobody can do it quite like her – in the post-show chat, Prenger told us that she loves her – Prenger did not imitate; she crafted (and held) her own.

The musical has been performed by many successful stage stars, including Bernadette Peters (whose English accent was bordering on awful, as much as it pains me to insult a Broadway Queen) – and Prenger is just the latest in a line-up of lively, legendary leading ladies.

The musical is a rollercoaster of emotion that ends with both sorrow and joy, so the vivacious second act was a welcome change. Prenger made for an hilarious hostess; she possesses an abundance of wit, made all the better by her refusal to take herself too seriously.

I was particularly touched when she answered a question from a young boy – he had submitted a question ahead of the post-show Q&A – who wanted some advice to get into acting. She located the boy in the audience and joked that he could cover for her the day after – but also invited him to meet her at the stage door so that she could give him her email address. What a darling!

I loved how Prenger brought out her understudy, Jodie Beth Meyer (yes, they’re both called Jodie), during the post-show conversation. Prenger is a notable theatre actress – her name is even billed on the posters – so I imagine Meyer only goes on when Prenger is sick. It is wonderful, then, that Prenger and the producers let Meyer showcase her talent each night.

Prenger and Meyer performed some ALW classics, including the criminally underrated ‘Another Suitcase in Another Hall’ from the aforementioned Evita, which they transformed into a duet. Even Madonna recognised the majesty of this song – when portraying Eva Peron in the film adaptation, she sang the song herself, even though it is supposed to be performed by her husband’s mistress.

The two Jodies tantalised us with their beautiful renditions of these timeless classics. Although it’s not an ALW musical, I was hoping they’d sing ‘I Know Him So Well’ from Chess, but – in the words of “the girl” – it’s not the end of the world that they didn’t because the rest of their covers were simply divine.

But, hey, if they tour Chess, perhaps Prenger and Meyer could take on the female roles!

Tell Me on a Sunday continues its UK tour throughout November – with its next (and final) two stops being Bury St Edmunds and Guildford. Take that look off your face and just go see it!