For the first time in its history, the Royal Exchange Theatre (RX) has announced a season covering an entire year. Whilst it’s a tradition that the RX announces two seasons a year – Winter and Summer – new Joint Artistic Directors Bryony Shanahan and Roy Alexander Weise seem determined to make their mark on the theatre with a string of ambitious (and exciting) changes.

Shanahan made clear her ambition and creativity when we interviewed her – and she has not disappointed.

One of the most unique theatres in the country, the RX’s auditorium is a futuristic glass structure in the middle of a restored exchange building that was bombed by both the Nazis and the IRA! Yet, the RX continues to reinvent itself, embracing change whilst holding on to its core values, such as championing diversity and inclusivity – though I guess being diverse and dynamic feed into each other.

The RX’s 2022 season was announced at a lovely press breakfast – the “2022 Programme Launch Event” – where a breakfast social was followed by speeches from acclaimed actor and Artistic Ambassador Maxine Peake and two Cheetham Hill Ambassadors, Shanahan and Weise (and Peake again), and Stephen Freeman – the RX’s Executive Director.

It was exciting to have Peake at the event. She has a long history with the RX, from playing the title characters in both Hamlet and The Striker to Blanche Dubois in A Streetcar Named Desire and Winnie in Happy Days. Whilst Hamlet, The Striker and Streetcar played over consecutive years (2014, 2015 and 2016), she took a year out in 2017 before returning for Happy Days in 2018. Sadly, that was the last time she performed at the RX – until now!

The 2022 programme is thrilling and enticing, with something for everybody – comedy, thriller, and, of course, an annual musical for the holiday season!

The season opens with Stef Smith’s Nora: A Dolls House, a domestic thriller directed by Bryony Shanahan – her first since Bloody Elle – A Gig Musical, which reopened the theatre in 2021. A searing adaptation of Henrik Ibsen’s A Doll’s House – a proto-feminist play that scandalised Victorian audiences – that follows three distinct and remarkable Noras over the course of 100 years of women’s liberation, from voting rights to contraception and modern-day life. Award-winning writer Stef Smith (Enough, Human Animals) makes her RX debut with this deftly beautiful play originally seen at the Citizens Theatre in 2019.

The second show in the season is Tim Foley’s Electric Rosary, which won the 2017 Bruntwood Prize Judges’ Award. Set in a time where nuns are scarce and robots are commonplace, a council-funded robot-nun is invited to join a convent. I’m already sold!

Foley’s (Astronauts of Hartlepool) innovative play was supposed to play at the RX in 2020. With direction by Jaz Woodcock-Stewart (Civilisations, Gulliver’s Travels), it is sure to electrify audiences when it finally arrives.

Hair, Wigs and Wake-Up: A commitment to care for afro and multitextured hair (April 2022)

The latest digital project from the Royal Exchange Theatre! Following consultations with performers the Exchange reschooled their thought process on how best to serve multi-textured hair types. The result is a brand-new series of short educational films created by the Exchange’s Wigs, Hair and Make-up Lead Joanna Shepstone and Consultant Hair Stylist and Co-creator Gege Uboma of The Afro Curly Hair Coach. These two exceptional hair professionals have joined forces, sharing knowledge, skills and a passion for excellent hair care to create eight films designed to contribute to and enhance the knowledge of theatrical wigs & hair care for performers with afro and multi-textured hair. These films will be free to access via the Exchange’s website and social platforms from April 2022.

A portrait of celebrated actor Ira Aldridge was the very first artwork purchased by Manchester Art Gallery in 1827. Now, in 2022, Roy Alexander Weise brings his extraordinary story to the Manchester stage in a brand-new production of Lolita Chakrabarti’s (Hymn, Life of Pi) award-winning Red Velvet.

As riots took place in the streets of London over the Abolition of Slavery, a young and revolutionary African-American actor stepped into Covent Garden to fill the shoes of London’s greatest actor, Edmund Kean.

Following his critically acclaimed production of The Mountaintop, Weise brings a new intimacy to this stunning play.

The Den in Cheetham Hill

Mirroring the spaceship-like theatre found in the city centre, The Den is the RX’s sustainable mobile theatre which will be ‘popping-up’ in Cheetham Hill this July. Programmed by the Cheetham Hill Ambassadors in partnership with the Royal Exchange, this beautiful wooden and canvas theatre will be home to a multitude of projects from community plays to workshops, readings, family events and so much more. The Den forms an integral part of the Local Exchange Programme, which is supported by The Oglesby Charitable Trust and the Esmée Fairbairn Foundation.

The last Tennessee Williams’ play performed at the RX was, of course, the aforementioned A Streetcar Named Desire – a soaring adaptation that starred Maxine Peake (my first time seeing her onstage). The Glass Menagerie, which played at the Royal Exchange about a decade ago, is a poetic and bruising portrayal of a family on the brink of change. Like Electric Rosary, it was supposed to be staged in 2020. Award-winning director Atri Banerjee (Harm) returns to the Exchange following his acclaimed production of Hobson’s Choice. Tennessee Williams’ semi-autobiographical memory play pulls apart the complex dynamics of an oppressive family life, and shows how unpredictable, painful and volatile memory can be.

Jack Throne’s (His Dark Materials, Harry Potter and the Cursed Child) adaptation of John Ajvide Lindqvists’s cult novel, Let The Right One In, is another play that was supposed to play at the RX in 2020. In a world where adults are failing them, two teenage outsiders are drawn to each other. One a bullied, isolated teenage boy, the other a feral, lonely and dangerous vampire. Separated by centuries and rejected by society, they find salvation in each other – and so begins a chilling and unlikely friendship. This unforgettable vampire story has gained cult status across the world; it is a sharp and reflective coming-of-age story that asks its audience to recognise and value the humanity in us all. This is the second play in the 2022 season to be directed by Shanahan.

The Bruntwood Prize for Playwrighting

Created in partnership with Bruntwood and The Oglesby Charitable Trust, this prestigious award is back. Submissions will open in January 2022 before closing on 6th June. Established writers and those who may never have written a play are encouraged to submit through an anonymous judging process, meaning each entry is judged on its own merit. Those looking to try their hand at playwriting ahead of submissions opening can find a wealth of free resources on the writeaplay website, including hugely popular online workshops from some of the industry’s top professionals. Further details – including the 2022 prize categories and the announcement of the judging panel – will be released in January.

In a small village hall, The Dewsbury Players (Yorkshire’s most passionate, dedicated and inventive amateur-dramatics society), have come together to celebrate their most eminent local hero, Dewsbury-born Betty Boothroyd, the first female Speaker of the House. The award-winning writer, performer and composer Seiriol Davies (How to Win Against History) joins forces with the brilliant creative partnership of Maxine Peake and Sarah Frankcom (The Striker, Happy Days, The Last Testament of Lillian Bilocca, The Nico Project), who have developed some of Manchester’s most original theatre productions.

Here lies another notable change by the RX’s new Joint Artistic Directors. In the past, the RX has always adapted famous musicals (e.g. Gypsy) for the holiday season. Whilst this year’s musical is The Strange Undoing of Prudencia Hart – a little-known folk musical – the RX is being even more radical next year by welcoming a brand-new musical – sort-of!

The Royal Exchange Theatre’s DISRVPT programme – a series of special events curated by Joint Artistic Directors Bryony Shanahan and Roy Alexander Weise that seek to disrupt the equilibrium of the Exchange’s Great Hall – will continue throughout the year including another event sponsored by WarnerMedia in Autumn 2022.

The RX’s resident award-wining companies – the Young Company and the Elders Company – will continue to make, shape and develop work across the year to be seen in the theatre, the Den, and across Greater Manchester.

The Elders Company is not the only opportunity that the RX has to offer for older people. Head to their Elders Programme page to find out more.

The Dream Project, currently under development, will form an integral part of the Elders programme next year. The exciting new project, led by award-winning theatre artist Cheryl Martin, is for older African and African-Caribbean Diaspora people from Greater Manchester who want to tell their story.

Having taken part in the RX’s competitive Behind the Scenes Work Week when I was 15, I’m well aware of the theatre’s commitment to helping young talent develop their skills and, eventually, break into the industry.

Following in from the success of the Young Company’s show The Survivors Guide to Living, director (and Young Company alumni) Anna Berenzten returns to direct an epic summer production.

Head to the Royal Exchange Theatre’s website to find out more about the incredible shows in its first ever year-long season, which begins on the 4th of March. In the meantime, you can catch folk musical The Strange Undoing of Prudencia Hart – the RX’s first musical in two years – until the 15th of January. Why have a white Christmas when you can have a strange one? 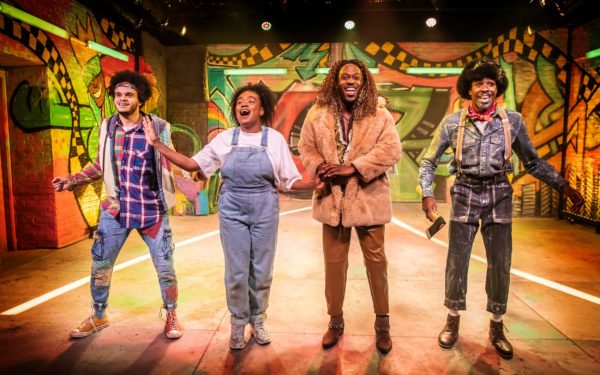