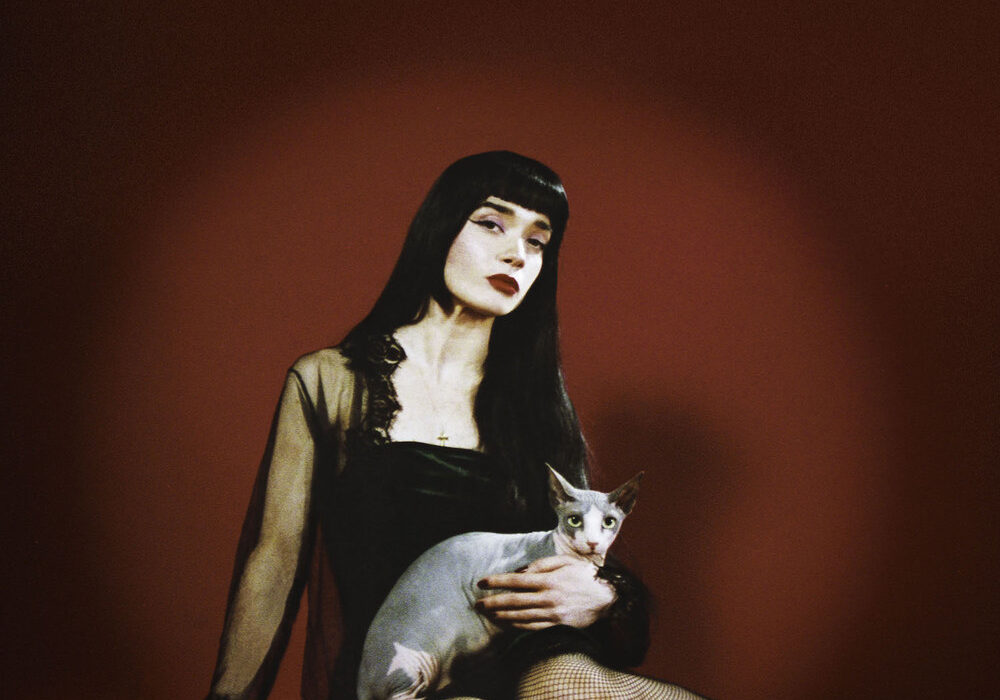 Many young artists struggle to have their ideas heard or executed in the ways they want. When I interviewed Freya Beer in April, she told me ‘I’m a bit of a perfectionist. I know what I want.’

If Beer’s set at Manchester’s Night & Day Café is anything to go by, it is clear that she is successfully crafting her own artistic universe. It’s one that takes her love of art, literature, and film, and combines this with her own personal style and experiences to make for an enchanting and enigmatic presence.

A disco ball hangs overhead, refracting many-hued fragments of light, and a sense of nostalgia sits in the air.

With Beer, every visual, every lyric, every riff is carefully arranged, purposefully placed. But don’t be mistaken. She’s self-assured, not cocky. With every note she casts a spell across listeners, who hang on to each poetic utterance, each breathy intonation.

Dressed in a slinky black velvet jumpsuit and with a black lace cape draped on her shoulders, Beer evokes the Pre-Raphaelite painting she sings of in the seductive ‘Siren’. Her sultry vocals and smoky riffs pierce through the crowd.

Freya Beer described her music to me as a ‘gothic tribal ritual’, something which translates when the tracks are brought to life onstage. ‘The Calm Before The Storm’ is a stomping affair, elevated by its strident guitars and Beer’s elegiac delivery. Meanwhile the title track of her debut record Beast, released in October of this year, with simmering instrumentals and a striking vocal delivery imbues the room with this energy.

Freya cites Nick Cave and Charles Bukowski as major inspirations, so its unsurprising that her lyricism is so rife with imagery, each song telling its own story. “Rosemary’s on my mind / Telling me she’s coming through in divining time” she sings in the vivid ‘Secret Garden’. There’s a certain melodrama to the music, her words underpinned by cinematic crescendos.

Her sleek black hair, like a charcoal curtain, swings as she sways to the music, leaning into the indigo guitar she effortlessly wields. During the thunderous ‘Dear Sweet Rosie’, she riffs off of her other bandmates, jamming to the tune’s formidable melody. Meanwhile the influence of the Romantic poets can be felt in its lyrics.

In true glam-rock fashion, she whips up a shimmering rendition of T-Rex’s ’20th Century Boy’, which goes down a storm. With her captivating stage presence and unique artistry, Freya Beer is certainly not to be missed live!

You can listen to Freya’s debut album Beast here: