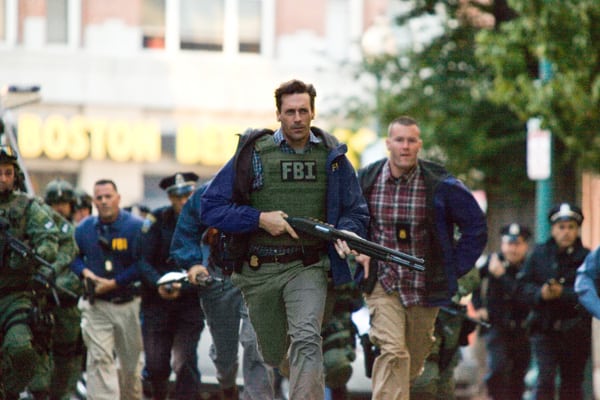 Many of you out there will believe, as I do, that awarding a piece of work three stars is highly frustrating. This magic number is inoffensive, uninspiring and tells the reader nothing of the subject matter. However, The Town may just be the exception; it conjures up enough brilliant moments and frustrating plot devices to be truly worthy of an average review.
The Town follows a team of four “professional” bank robbers hailing from a one-square-mile area of Boston, known as Charlestown. This neighbourhood is apparently responsible for over 300 bank robberies a year, and so we begin by witnessing a typical bank heist. At the helm, both in character and direction is Ben Affleck, fresh from his critically praised directorial debut, Gone Baby Gone. Affleck egotistically placed himself in the film as the lead, with a character ‘not cut from the same cloth as his fellow thieves’, who displays inexplicable amounts of charm, but luckily still makes an enemy; an FBI Agent played by Jon Hamm. Taking time out from Mad Men, Hamm swaps his famous portrayal of a suave professional who writes his own rules, to play, well, pretty much the same character, but with a gun.
Hamm and Affleck give admirable performances, despite a wavering, distracting accent from Affleck, and the fact that Hamm simply isn’t given enough script or screen time to truly make use of his scheming, underhanded character. However the great turn in the film belongs to Jeremy Renner. As Affleck’s brother in arms his actions are unpredictable and his motives unclear, bringing real fear and urgency to any scene he fills, especially in the film’s climax. Even if Renner isn’t orchestrating the action, Affleck’s direction ensures that key scenes are given justice, the action injected with real pace and grit thanks to tight editing and ever changing complications. His judgment also shines when considering setting; the savage nature of these Irish-Americans struggling in a neighbourhood rife with conflict is well documented.
Where the film struggles is in its handling of the other story arcs that surround Affleck’s character, dealing with his broken parents and the dangerous romance he shares with the manager of a bank he stole from. Although this romance is necessary to the plot, its progression is clumsy and at odds with the scenes it intersects; often the pace of the film grinds to a halt just to allow the two characters to discuss unimportant matters. The involvement of parental issues is wholly inconsequential as the great expectations that are built up by these scenes are shattered, when Affleck rarely raises an eyebrow to the shocking denouement regarding his parents. The time spent needlessly developing a family should have been spent developing the other two robbers as characters, who should hold as much importance as Renner but only share a handful of lines through the entire film.

Verdict: Aside from a few poor plot choices, Affleck has directed another solid outing in The Town, with his credit being owed to his well crafted action scenes and a defining performance by Jeremy Renner.