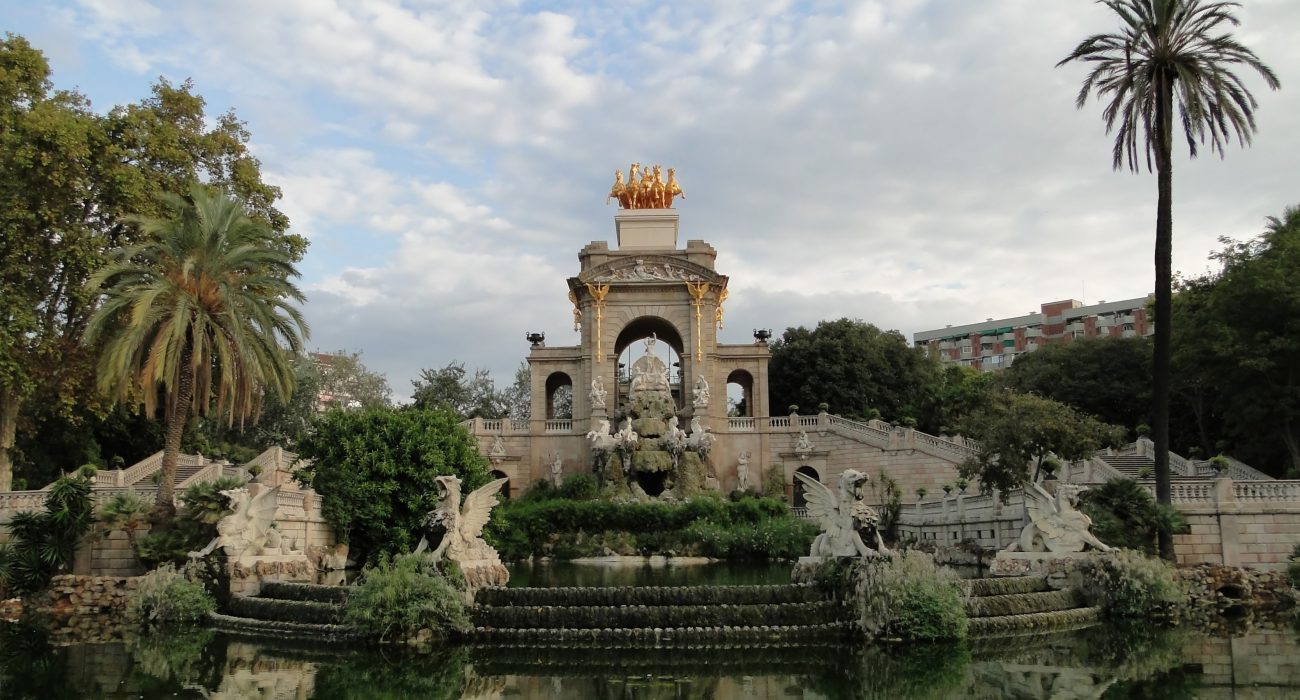 The pigeons in Barça were once angels, landed from the heavens to peck at the ground with Evangelical adoration. These giggling babies have sprouted dank feathers. Lost, silent, strident, host to great lustless love that the fallen always host, shitting white paint immaculate over the undeniable vista that is Barcelona. The symbolic logic is easy to follow. Here, palm fronds explode glory, love, loss, glamour and there, the fountain of pink stone and gold, adorned with moss-chested gargoyles, spits blue water fire into the air. Above, the God Mother, Aphrodite, grows out of a clamshell, surveying Barcelona from points on high. In her hand is a torch that sits under the sun like an ice cream cone.

In the corner, across from the fountain, sits Peter Proma who is casually blowing tobacco incense (poison in England) into the Spanish air. He has come on holiday; the nightlife, he’s heard, is better than Fac251, but he hasn’t yet been out. How can he think of clubs while doves dive over fountains of gold, he wonders. He has seen the sun in the cloudless Catalan skies, and, overwhelmed, sees clues vibrantly in sound and scent. He has walked the stations of Gaudi’s cross, each step a notch in the staircase that rings around the fountain, up to her hand that holds heaven’s winch. He plans to climb it, to swim upriver like a salmon, and grab that Barcelona fire right off those perfect sandstone fingers. His grandfather, a Catalonian expatriate, had told him stories, and, like a visionary, can see through the bright shadows that he is the global enzyme; ready to steal sparks from Aphro’s arm and fly on the backs of her cooing, dirty messengers, ready to spread the burning glow through the corners of England and pierce the clouds like a lance. He sits, he waits, he marvels, until

“Pardon, cerveza?” He is startled out of his revelry by a Pakistani street dealer. “Non, non, gracias,” he replies without looking up. “Tu es bueno?” another asks. They seem to grow here like weeds. He repeats “Non, non gracias.” “Pardon,” from behind, and he wheels around angry, ready to yell, but instead of a street dealer, it is the face of a sunset he sees, trellised in bangs of sandstone. She holds dark glasses in her hand, sheepish and French, and he reels, falls, faints, and realizes he has just blown a wreath of smoke in her face. “Français?” she asks. “Oui,” he replies. “Est-ce qu’on reste la?” she asks, pointing to the other half of his bench, and he sinks from fantasist to foreigner, from dreamer to dullard. The pigeons are once again just dirty rats, Aphrodite is once again just a statue shining in the sunlight and glancing around, he realizes all the benches facing Ciutadella Park’s Fountain are all full. She coughs and waves the smoke he blew away from her face. Peter Proma is embarrassed.

“Personne, personne,” and she sits without smiling. In fact, she is frowning. Peter says bollocks in his head. The fountain stops spewing and all is silent for a moment. The pigeons are trying to rape each other barbarically, gullets swollen and shaking in desire. The girl is swaying in her seat. He doesn’t stare, just tries to look attractive in the corner of her eye. Another vendor, Spanish this time, comes up and asks “Roses for the lady?” in English. Before he can say non, non, gracias, she bursts into hysterical tears and covers her face in her hands, sobbing, sounding harpishly as she shakes. The Spaniard leaves quickly, but Proma does not. The situation is awkward, but he is prone to illusions of grandeur. The water turns back on in the fountain and water comes out of mouths again.

The sounds are of an ocean burial, tossing the dead to sea, loved ones commiserating and moaning the body, but here the waves are manmade jets and the bereaved is just one nymph from France. She is a rip in his favorite shirt, and, clumsily, he takes up the needle and asks “Que mal?” She continues crying. He doesn’t know what to do. Eventually she turns and yells in pigeon ejecting timber “Que mal? Tout les gens du monde sont mal!” She points at him and yells in French that he can’t understand, partly because it is too quick, partly because it is too slurred. Her tears glint in the sunlight as her eyes contort in pointed danger, radiance magnified to burning fire. Peter looks away at the ground, saying “I’m sorry, I’m sorry, I’m sorry.” She pushes him away and tries to stand up. She cannot and falls heavily onto the bench. Another vendor with a patchwork face sneaks up and whispers “Cerveza?” again and Peter yells “No!” but the girl yells “Coka! Coka!” The man puts a finger to his mouth and hisses, but pulls out a gram and slides it to her. She points to her purse, still weeping into her hand, and pauvre Peter sees the man takes twenty Euro too much. He says nothing. At the top of the fountain, two police are giving directions to Korean tourists, and Peter knows he probably shouldn’t be sitting next to this goddess spreading a line over the glass of her cell phone screen, spilling Euro-worth quantities of cocaine onto the ground. Too much medieval reading or too much romance in the Spanish air, who knows, but he stays and watches her suck powder up into her head. She rubs her nose with shaky fingers, and says in the perfect bell accent of middle Europe, that makes the hideous drone of Anglo-Saxon sound rich and creamy, Nutella in a crepe, fireplace crackle in winter, wind chimes by the ocean, calling, calming, and open. “You’re English, oui? I’ve always preferred Australians, but you seem nice enough.” The pigeons are back and cooing. “Cigarette?” he offers.

She accepts readily. They smoke together in silence until Peter tries at his stitching again. “If you’d like to talk, I’d love to listen. There’s not much else to do here anyway.” She smiles and with dignity grasps her thighs and forces herself to stand. “You are very sweet,” she says, and kisses him once on each cheek. She starts to move away. Peter leaps up to his feet, spilling ash all over his clothes. He calls “Can I help you?” but she just says “Non, non, gracias” and walks over the sand, past the statues of dragons and Aphrodite, past the police, and onto a walkway. Peter is worried, nervous for such a pretty girl to be alone in Barcelona, but to follow would seem pigeon-like. He frets, indecisive, but finally runs up to a man from Bali, buys a rose for five euros, and takes off down the walkway. He is sure that by now she is gone, but he runs anyway, desperate and sweaty. There, ahead, as if by magic, he sees the trellis of her hair, radiant, bobbing along. He runs in front of her, falls to one knee, and offers the flower up to her, a token of devotion. She takes it and giggles. He looks up to see a different face, beautiful still, but smaller with heavier make up. The girl smells the rose and says “Cheers, love.” It is wrong, he knows, but he smiles too. Better to hear a Mancunian call in Spain than “Non, non, gracias.” 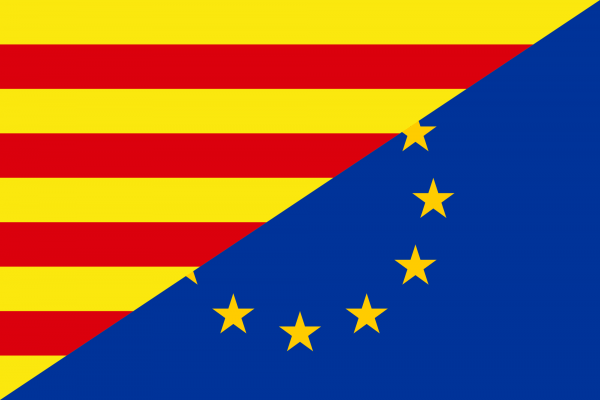 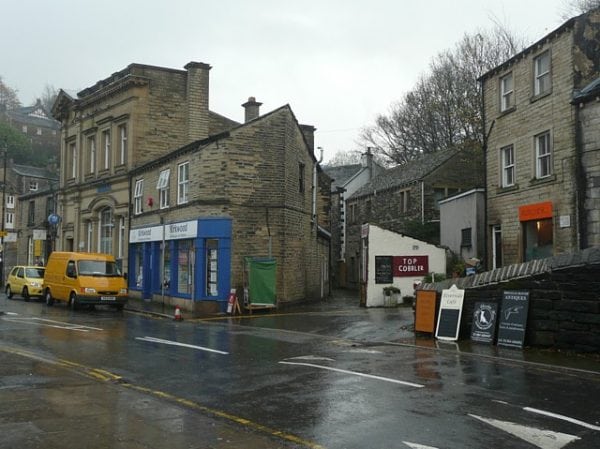