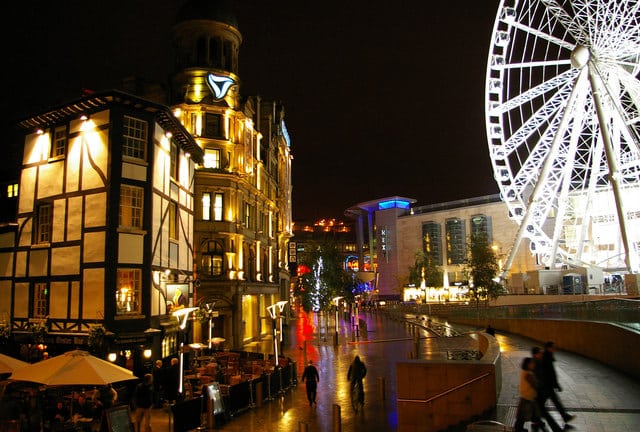 “There’s nothing to do in Manchester,” proclaimed football’s most divisive hero/superbrat/mercenary (delete as appropriate) at the start of the summer. “There are two restaurants and everything is small… you can’t go anywhere.”

Not content with a to-die-for combination of undeniable talent and an astronomical pay packet – to top it all, Manchester City striker Carlos Tevez has been thoroughly unimpressed by the astonishing plethora of entertainment on offer in a city that the New York Times recently included in its list of ’41 Places to Go in 2011’.

There is, it seems, only one logical explanation behind the Argentine’s incredulity. Tevez – an obscenely wealthy footballer firmly detached from student reality – has clearly not ventured far enough beyond the comforts of his cosy Cheshire hideaway to experience all that the heart of Manchester has to offer. He might be the fussiest man in the country.

Put simply, students who get the most out of the ‘Manchester experience’ excel where Tevez has fallen short; for all that a packed Students’ Union, a lively campus and a frenetic Fallowfield have to offer, we could compile a veritable dossier on all of the things that you would miss out on by failing to explore one of the world’s great city centres.

Piccadilly Gardens is, perhaps, the epicentre of Manchester; the position from which a truly 21st Century city sprawls to take in the locations of some of the best days and nights out you are likely to find anywhere. A hustling, bustling hive of activity, the square is bordered on one side by a never-ending stream of buses – a hugely convenient way of getting home at the end of a long night on the tiles. At the centre, a set of geyser-like fountains provide the focal point for many a Mancunian child on that rarest of occasions, a balmy summer day.

Turn around, and you find yourself bounded by a row of trendy bars and restaurants, including the lively KRO Bar (one of seven in the city and the perfect location for the adventurous to sample Scandinavian cuisine, washed down with cold Danish beer). Searching for those last few accessories to top of your latest fancy dress effort, or simply hankering after some cheap retail therapy? An enormous Primark stands imposingly at the top of the high street on the opposite side of the square to KRO.

A 60-second walk down Market Street and you’ll find yourself at the entrance to Manchester’s Arndale Centre, the UK’s largest inner-city shopping centre providing a home to over 240 shops. If you don’t fancy an arduous bus journey to the brilliant (but out-of-town) Trafford Centre, the Arndale is markedly less hectic and equally well-disposed to you blowing your student loan in the first week of October.

Down past the bottom of Market Street, and outside the far entrance to the Arndale, lies Exchange Square – home to upmarket department stores Harvey Nichols and Selfridges, as well as the ‘Wheel of Manchester’. The wheel, our not unimpressive answer to the London Eye, stands just thirty seconds away from the Printworks. “A buzzing, state of the art entertainment complex” boasting an ODEON cinema alongside several restaurants and clubs, it is perhaps most notable for housing Tiger Tiger, home to Wednesday’s infamous AU Social.

For those who are less enthused by the bright lights of commercialism and consumerism, the effervescent Northern Quarter emanates from Piccadilly in an altogether different direction. Described as “a centre of alternative and bohemian culture,” this fascinating collection of entwined streets was recently transformed into 1940s New York for the filming of summer blockbuster Captain America.

Like most parts of Manchester city centre, the Northern Quarter contains more bars than you can shake a proverbial stick at – but it is the diversity of distractions on offer here that marks the area out as unique. Highlights include the legendary Band on the Wall, arguably the best live music venue around; the uniquely chilled out atmosphere of Matt and Phreds, a live jazz bar; and, if you fancy a laugh, visit the Frog and Bucket comedy club (Monday’s ‘Beat the Frog’, an open mic competition showcasing some of the best new acts around, is a particular treat).

Meanwhile, Afflecks lives up to its’ self-styled billing as an “emporium of eclecticism”. From fancy dress to soap, candy to tattoos, nowhere in Manchester are you more likely to encounter the weird and wonderful than on a trip to this most unusual of takes on the traditional shopping centre.

On an altogether different note, Deansgate lies a short walk to the west of Piccadilly Gardens. A long, straight road lined with large high streets stores and – yes, you guessed it – even more bars and restaurants, the real attraction of the area is Deansgate Locks, to be found at the very end of the straight mile. Beautifully located right by the water, it is home to the enormous bar/club Revolution (the venue for Monday’s night consistently sold-out Pout), amongst others. Nights out in Deansgate rarely, if ever, disappoint.

Unfortunately, the length of this piece precludes me from even beginning to cover the vast array of entertainment of offer in this vibrant cauldron of a city. It is alleged that there is a bar in Manchester for every single day of the year – though I suspect there might be even more than a meagre 365.

The single most important piece of advice I could give to this years’ cohort of freshers, therefore, is as follows; don’t settle for the same old nights out, week after week after week. As good as they are, there is so much more to see and do beyond going to Pout every Monday and Sankeys every Thursday – and those nights when you do something a little bit different might very well be the making of your time at Manchester.

Best of the Rest

Oxford Road’s Cornerhouse, with its winning combination of independent British filmmaking and blockbuster screenings, is the best place in the city to catch the film of the moment.

Lying inconspicuously at the bottom of a flight of stairs on one side of Oxford Road, converted public toilet The Temple is one of Manchester’s smallest bars and favourite of musicians including Elbow lead singer Guy Garvey. It’s a tight squeeze down there but it’s also a must see!

If you feel like throwing caution to the wind – and spying on some footballers in the process – Manchester 235 Casino is a great way to end any night. Just make sure you don’t take your bank card!

And finally, a seasonal suggestion. Manchester boasts the UK’s best Christmas Market, serving up a diverse collection of stalls and copious amounts of obligatory mulled wine. Make sure you get down to Albert Square (just a stone’s throw from Market Street) from 17 November.