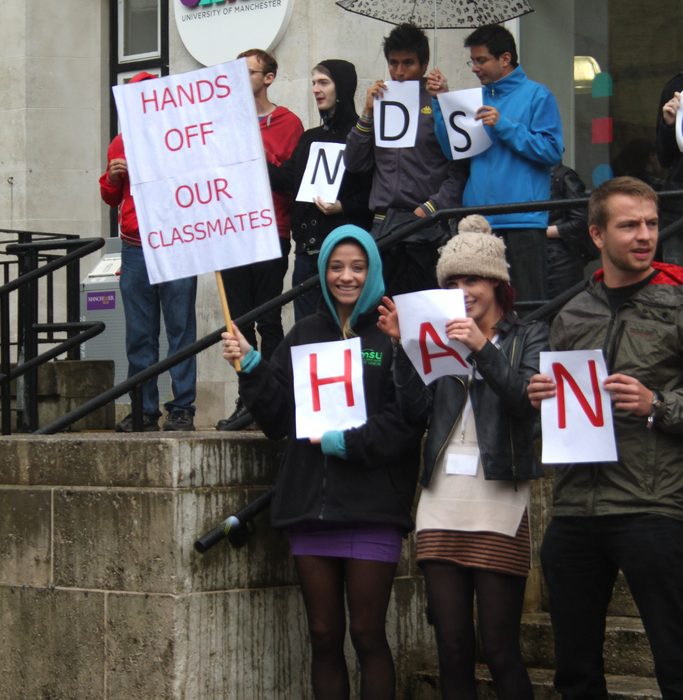 Students from across the UK staged a protest over the revoking of London Metropolitan University’s ability to sponsor foreign students in Manchester last Wednesday.

London Met’s ‘Highly Trusted Status’ was suspended last month after the UK Border Agency found students at the institution did not have visas to study in the country. Meaning more than 2,000 international students have three months to find a new course at a different institution, or arrange to leave the country.

“We are here to express solidarity with London Metropolitan students. These students face deportation because of the decision that the UK Border Agency took,” said Manchester Students’ Union Diversity Officer Saad Wahid. “We are demanding this kind of decision should be talked through.

“These international students who are genuine and sincere, who pay their fees, who come to study everyday, who attend their lectures, should not be treated in this way…it’s inhumane.”

Legitimate international students officially have 60 days to find a new course at a different institution or make arrangements to leave the UK. But the time limit will not take effect until the UKBA sends out letters to each student, which they said they would not do until 1 October.

Shadow Chancellor of the Exchequer Ed Balls has condemned the treatment of the overseas students as “disgraceful”.

Fellow London Met student union official Adnan Pavel said, “This is sending a negative image of UK higher education around the world, that UK education is no more for international students.”

The International Officer for the National Union of Students Daniel Stevens was also among the protesters.

Immigration minister Damian Green said the UKBA had no choice but to revoke LMU’s license, saying the university proved to be a “very deficient” sponsor because more than a quarter of students sampled did not have permission to stay in the UK.

Protesters acknowledged the rally would have been more successful if held during freshers’ week.

“There would have been more student population to witness the event and participate in the event,” said Finn Box, who is studying for a PhD in Physics at Manchester. “The protest has been dampened by the Manchester weather.”

Mr Wahid was pleased by the turnout, he said, “In spite of the fact there was a lot of rain, I think we had 50, 50 plus people here, which shows that people are passionate.”