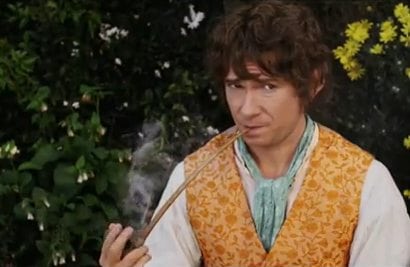 Martin Freeman in The Hobbit

5) The Life of Pi
Based on Yann Martel’s classic, much loved novel and directed by Ang Lee. Pi an Indian zoo keeper’s son is marooned on a lifeboat with a Bengal Tiger. The story follows an epic journey where trust and friendship are earned through devotion.

Bruce Willis stars in this near future sci-fi thriller where he interferes with his own past, a past in which his career is killing time travellers for a powerful crime syndicate.

Neeson returns as the ultimate over protective father. Yet this time around both he and his wife are kidnapped by vengeful relatives of the previous film’s deceased kidnappers. Ironically, their only hope of rescue may be their daughter.

Bond is back with all the style and darkness that Daniel Craig brought to the franchise in 2006. The story centres on M’s past, and 007 must sacrifice everything for Queen and country.

1) The Hobbit: An Unexpected Journey

It’s been 9 years since the final film was released in Tolkien’s epic set of novels, now Jackson returns to the start with The Hobbit. The film tells Bilbo’s tale of how he set out to defeat a dragon and accidentally came by The One Ring, setting the stage for the events of the Lord of The Rings. Martin Freeman is an inspired choice as Bilbo.