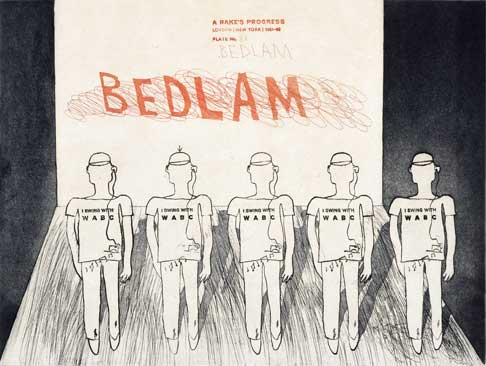 Hockney to Hogarth: A rake’s progress

The Hogarth exhibition is more about Hockney’s early work than a direct comparison between the two artists, and in that sense, its a fascinating insight into Hockney and his world. The context to Hockney’s paintings is set by the first room, housing influential paintings by his revolutionary contemporaries from his 1959 class at The Royal College of Art. These friends helped bring Hockney’s own life, political thoughts, and sexuality into his work which is a clear motivator behind his Rake’s Progress.

But his main influence was his trip to New York, which he wrote about saying ‘I was taken by the sheer energy of the place…It was amazingly sexy, and unbelievably easy’. Contrasted to Hogarth’s fiercely heterosexual London, with the protagonist Tom Rakewell falling foul of the women in the syphillis-filled brothels, Hockney’s New York is much more of an exploration of his own adventures in the city’s gay bars. Subtler and far more abstract, the tensions of his experience living in a city that was introducing its own homophobic crackdown creates an interesting backdrop. The artistic style is modern and light, but with carefully chosen images that make up the oblique sequence. Hogarth’s Rake has a seemingly moralistic tone – a warning perhaps – against the pitfalls of an 18th Century young inheritor and the downward slope he could easily fall down.

However, in Hockney’s prints he places himself directly in almost every frame, showing the real effect New York had on him as a person and an artist. He visits Washington, 24 hour bars, meekly but passionately watches two male joggers, and experiences the life of an American prisoner albeit through the art of cinema. Instead of a slow, literal decline into Bedlam as in Hogarth’s Progress, Hockney’s male is hardly definable in his final frame from the four other boy’s walking mindlessly towards a screen, personal music devices in their back pocket and all wearing baggy jeans and caps- not a far cry from a typical day down the Oxford Road. In essence Hockney’s series is far more personal and indicates a real progress in his art as well as his development as a man. The Hogarth engravings are much more side-lined, shown more as a context to Hockney, but really are beautiful. The detailing and activity in each one shows great personality and, perhaps the exhibition was slightly lacking in further information on Hogarth’s life and work.

If you want a quick look into early Hockney and a truly interesting interpretation of Hogarth’s famous sequence, this is a really neat (and of course free!) exhibition. If you’re popping back from uni on your way home, the Whitworth is a really rewarding visit.